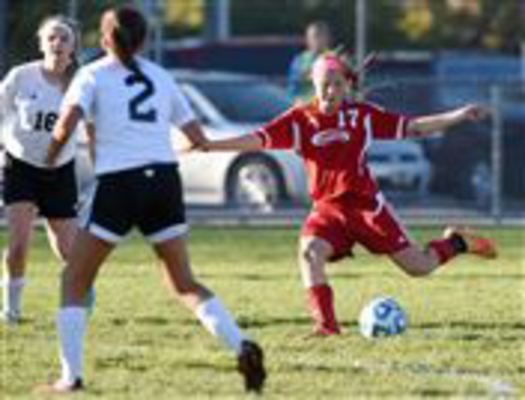 Goshen’s Aylissa Trosper (right) is hoping to lead the Goshen RedHawks on an extended girls soccer tournament run in her senior year. 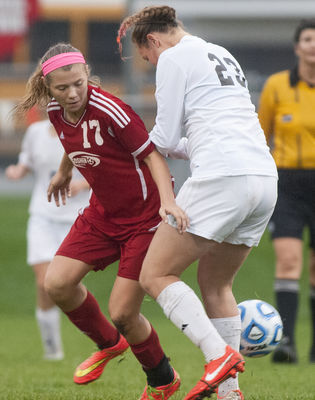 Goshen’s Aylissa Trosper (right) is hoping to lead the Goshen RedHawks on an extended girls soccer tournament run in her senior year.

GOSHEN — It’s not quickness or flash or a booming kick from 20 yards away that sets Goshen High senior Aylissa Trosper apart from most soccer players in the state of Indiana.

But if you listen to RedHawks coach Dan Graber, Trosper’s toughness and work ethic have been the keys in making her Goshen’s all-time leading scorer.

“Aylissa is just relentless, determined and a real fighter ... she will go out there and fight until the final whistle and has no fear whatsoever,’’ Graber said. “When you have the kind of drive she has, you’re going to get better as a player. I’ve had very few girls stay after practice and work on their game, but Aylissa is one that stays and works. ... She really takes the game to heart.’’

Trosper leads the Northern Lakes Conference with 16 goals. Earlier this month, she passed Jelitza Palomino as the leading goal scorer in Goshen history at 58 and in total points with 145. Palomino did miss her senior year after tearing her ACL in the summer of 2015.

“We’ve been playing soccer at Goshen for a while and we’ve had some great players come through here, so for her to set those records is quite an accomplishment,’’ Graber said. “I know it was a goal she set before the season started and it’s a testament to her that she set it with at least five games to go in the season.’’

Trosper and Palomino were teammates on the 2014 Goshen team that reached the Class 2A semistate. With her team at 10-2, Trosper is hoping for another tournament run.

“Making a run is really important,’’ Trosper said. “When we got to the semistate in 2014, it really helped with my confidence, and as a team I think we all learned what we needed to work on. I won’t be here next year, but I believe playing in the regionals and semistate would really help our younger players get ready for next season.’’

As an all-district selection last fall, Trosper had the opportunity to play a game in Indianapolis with some of the top players in the state. She had a goal and an assist, helping to boost her confidence further.

“We were supposed to play two games (in Indianapolis), but the first one was played in the snow and they decided that was enough,’’ Trosper said. “But Coach is right, it really helped my confidence to play with that kind of talent. I was also also able to see how other great players conducted themselves and I was able to bring that back to our team to try and help everyone learn.’’

“Her determination has grown every year, but playing and competing with the best players in the state helped her to realize that she can play at that level and have a breakout year for us,’’ Graber said. “She’s playing the best soccer of her career and that’s what you want from a senior.’’

According to Graber, one of the things Trosper has worked hardest at in those after-practice times is her ability to finish around the goal.

“Aylissa has always had a real nose for the goal, but when she was younger, she would get frustrated by not being able to finish all the time, Graber said. “But I’ve been impressed with the way she’s taken it upon herself to really work at that part of her game. Now she’s really putting it all together and has become a great finisher.’’

“(Assistant) coach (Kari) Wildman and I have been working on my shooting after practice,’’ Trosper added. “The placement of my shot has been the biggest thing we’ve worked on this fall and I feel that it’s helping me a lot.”

A two-time all-district and all-league selection, Trosper is being looked at by several smaller colleges. She is looking to go into either nursing or elementary education, with an eye on coaching.