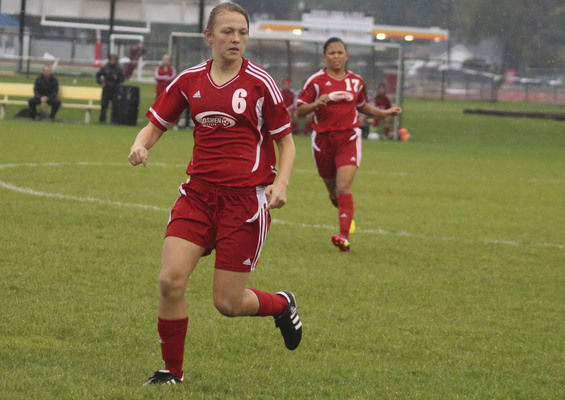 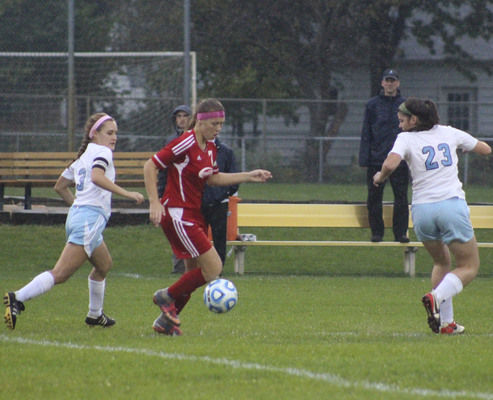 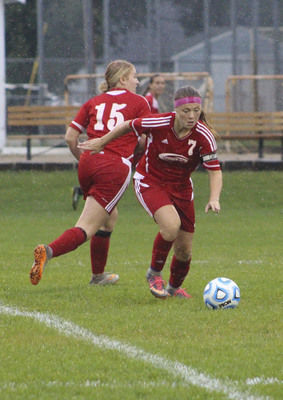 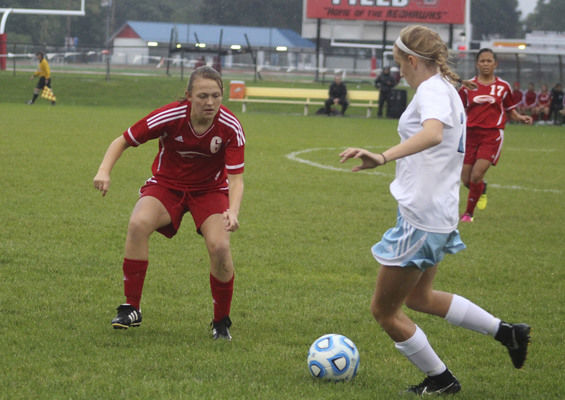 GOSHEN — As the wind blew and the rain came down in sheets, Goshen girls soccer coach Dan Graber took time to look out on the soccer field Wednesday night and gather his thoughts after his RedHawks fell to South Bend St. Joseph 1-0 in the opening semifinal of the Goshen Regional.

When he finally turned to talk, he had nothing but glowing words for his 2016 team.

“It was an honor and a privilege to coach these girls,’’ Graber said. “I couldn’t have asked for more from them, even tonight. Every girl that played tonight left her heart on the field and that’s a very special thing for a coach to see.’’

In the evening’s second game, the Kingsmen jumped out to a 6-0 halftime lead and cruised to a 7-1 victory over Warsaw. Penn junior all-stater Kristina Lynch scored four of the goals and assisted on the other two in the first 40 minutes, as the Kingsmen improved to 18-0-1.

While the RedHawks controlled the ball for much of the second half, the Indians were the team that was able to put a score on the board.

With just over eight minutes to play, St. Joe’s Nicole Nemeth took a sharp lead pass into the Goshen zone on the right side of the goal. Nemeth then boomed a kick over Goshen goalie Kassandra Rodriguez’s hand and into the upper left side of the goal. It was the first goal given up by Rodriguez in the tournament.

“There really wasn’t anything Kassandra could do, it was just a beautiful goal,’’ Graber said. “She just got away from us for a moment, took a great pass and put the ball in the net. Give her credit.’’

Goshen threatened in the final eight minutes, as senior Aylissa Trosper and junior Anne Nisley pressured St. Joe goalie Nicole Page, but they were unable to get the ball past her in what had become a driving rainstorm.

“We had just beaten Northridge on Saturday (1-0) in a game where they had several chances but weren’t able to finish,’’ Graber said. “Tonight, it was our turn to do the same thing. I thought we had some opportunities, but we just couldn’t convert.’’

Goshen’s Aniya Hartzler, who scored the only goal in the Northridge game on a penalty kick, had a PK sail high over the crossbar on her Wednesday. Trosper’s best chance came at 30 minutes to play when her shot just missed a little high.

The nasty weather had an effect, although Graber said it was the same conditions for both teams.

“It’s been a long time since I’ve seen a game like that,’’ Graber said. “Probably the biggest thing it did was, no one really wanted to possess the ball for long, so there were just a lot of kicked balls out there, rather than working on possession. Plus, St. Joe’s defense put a lot of pressure on us, too.’’

Goshen loses just two seniors, but they are good ones in Trosper, who scored a Goshen-record 27 goals this season, and Rodriguez, who pitched three shutouts in the tournament.

Next: Penn vs. SB St. Joseph in 2A Goshen Regional championship Saturday, 2 p.m.