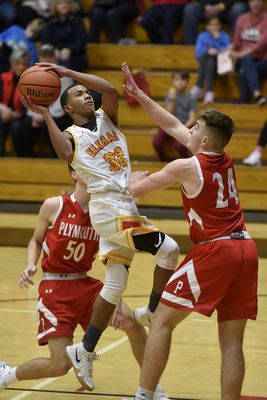 Elkhart Memorial's James Peters takes the ball to the basket against the defense of Plymouth's Jake Reichard, during a Northern Lakes Conference battle at North Side Gym on Friday. Plymouth won 53-50 on a buzzer-beater by Reichard. 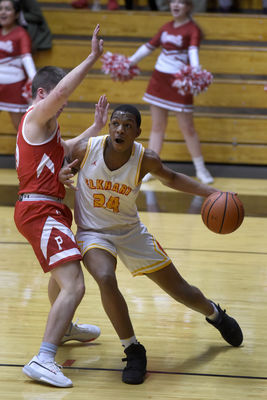 Elkhart Memorial's James Peters takes the ball to the basket against the defense of Plymouth's Jake Reichard, during a Northern Lakes Conference battle at North Side Gym on Friday. Plymouth won 53-50 on a buzzer-beater by Reichard.

ELKHART — With 11 seconds left on the clock and the game tied at 50, everyone knew where the ball was going.

Elkhart Memorial's D'Arjon Lewis did all he could – playing tough man-to-man defense and not allowing Reichard to drive to the lane.

But Reichard would win the battle anyway, banking in a 22-foot 3-pointer at the buzzer, to give the Pilgrims an exciting 53-50 Northern Lakes Conference victory over the Chargers.

"D'Arjon did everything right, Reichard just hit a great shot off the glass,'' Memorial coach Kyle Sears said. "Sometimes, you just have to tip you're hat to them.''

Plymouth is now tied with Northridge at the top of the Northern Lakes Conference with identical 2-0 records, while Memorial falls to 1-1.

In a terrific game of runs, Plymouth had the final one, outscoring the Chargers 17-7 in the third quarter, as Memorial went nearly the first 4:22 of the fourth quarter without scoring. The drought took a seven point Charger lead to a five point deficit.

"We had two quarters where we struggled to score and they only had one,'' Sears said. "We had some good looks early in the fourth quarter, but we just didn't get them to fall. Throw in a couple turnovers and it cost us.''

It didn't help that Reichard was lights out in the fourth quarter.

But the Chargers came right back, with senior Brackton Miller hitting a three-point play just seven seconds later to cut the lead to two.

After Plymouth's Easton Strain hit a layup after a great pass from Reichard to push the lead back to four, Memorial's Malachi Emmons scored with 2:09 to play, followed by layup by Miller after a steal with 51 seconds on the clock to tie the game at 50.

Memorial had two fouls to give before putting Plymouth at the line and they used one when Reichard broke free towards the basket with 11 seconds to go. The Pilgrims got the ball out from under the basket and got it to Reichard, setting up the one-on-one shot.

"We didn't really have a set play taking it out under the basket, but when Jake got it, the kids knew to clear out,'' Plymouth coach Ryan Bales said. "I would have liked him to get a little closer, but he hit the shot, so I won't complain.''

The Pilgrims opened the game like they planned to take ownership of North Side Gym, as the visitors hit three straight 3-pointers to open the game and led 18-9 at the end of the first quarter.

Plymouth led by 15 after a long 3-pointer from Adam Hunter with 5:59 to play in the second quarter. But the Chargers would come crawling back, starting with a three-point play by Damarian Anderson that made it 26-14.

The Pilgrims led by 10 after a rebound basket by the Chargers' Malachi Emmons with 2:14 left in the half. Plymouth then took over two minutes off the clock, before Emmons intercepted a pass and drove for a basket that turned into a three-point play with 5.6 seconds on the clock.

"That was a big play,'' Bales said. "We had played really well and wanted to take a solid lead into halftime and instead, the lead was down to seven that quickly.''

The Chargers opened the fourth quarter on a 17-2 run and took a 40-32 lead with 2:39 to play in the third quarter. Miller had seven points in the run and then added another 3-pointer after Plymouth's Cameron Weidner stopped the Memorial run with a trey of his own.

"I was proud of the way our kids kept coming back tonight,'' Bales said. "They easily could have quit after that run by Memorial, but they didn't lose focus and fought back in the fourth quarter. We needed stops and they battled and got them.''

In addition to Reichard's 30 points, Hunter finished with 11 for the Pilgrims. Miller would lead Memorial with 19 points, while Emmons finished with 11. The Chargers shot 52 percent from inside the line, but just 4-18 from 3-point range.

"I thought our pressure bothered them and helped us get the lead in the third quarter,'' Sears said. But give them credit, they did a much better job in the fourth quarter of taking care of the basketball and getting it to Reichard.''

The Chargers are now 4-5 on the year after starting the year 3-0.