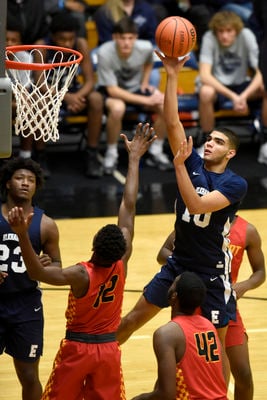 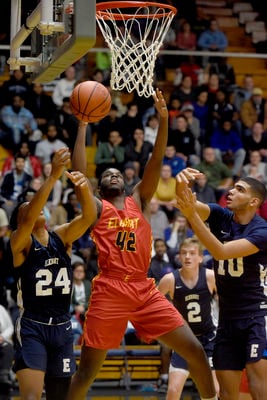 ELKHART — Shaking off a clanky beginning, D’Arjon Lewis drained the shots he had to drain, and even the one that perhaps he shouldn’t have tried.

With the Elkhart Memorial junior guard pouring in 21 of his game-high 26 points in the second half and swishing a 3-pointer with 56 seconds left to extend his team’s lead to seven, the Crimson Chargers held off Elkhart Central 67-56 in possibly the last-ever boys high school basketball meeting between the 48th-year rivals Friday night at buzzing North Side Gym.

“At that moment, I had all the confidence in the world in my shot,” Lewis said with a smile of his closing-minute, right-wing triple in front of a crowd estimated at 4,500. “We put up about a hundred shots every practice, and for me to be able to hit that one means a lot.”

“No way,” Charger coach Kyle Sears said with an even bigger smile of whether it was a shot he wanted Lewis even attempting with his team already up four points and in the double bonus. “You’re hoping to get a little closer shot, or maybe draw a foul, but he hit it, so you gotta live with it. It’s a teachable moment, but it was also a big-time play. So what do you say sometimes?”

The Chargers responded with the next four points on a drive by Malachi Emmons and two free throws by Lewis.

A Cam’ron Daniels drive tightened the count to 60-56 at 1:20 to go, before Lewis let fly his high-confidence dagger that lifted him to 4-of-9 outside the arc for the night.

After converting just 2-of-9 from the field overall in the first half, he was 7-of-13 in the second with a trio of 3s, and he added 6-of-7 free-throw shooting.

Barring a sectional matchup that’s not guaranteed to happen, Friday’s game was the final meeting between the programs in boys basketball before the schools merge back into one next fall.

“It feels amazing,” Lewis said of the victory under the circumstances.

“I kind of don’t like the fact that this is going away,” he added, “but we’ll all be one big family next year, so we’ll see what we can do.”

Lewis added a game-high four steals to his 26 points and dished three assists.

Sophomore guard Titus Rodgers – who played at Central last year – burned his ex-mates with 18 points and two steals for Memorial.

Senior forward Brandon Brooks hauled in a dozen rebounds and swatted away three shots for the Chargers to go with five points.

“I’m very proud of my kids for never giving up,” Blazer coach Scott Sekal said. “They fought hard, cut it to two points with a couple minutes to go. We were right there, but you gotta give Memorial credit for making their free throws.”

“We missed some layups and we missed some free throws,” Sekal said. “We work on it constantly and we are getting better.”

The game was tied three times, the last at 32-32 early in the third quarter, but the Blazers never managed a lead.

“We talked at halftime about some things we needed to do better, and I thought we did do better,” Sears said. “We had to shore up the boards because they had 14 offensive boards in the first half, and that’s way too many, and we took better care of the ball in the second half and got some easier buckets.”

Central still limited Memorial to 20-of-60 shooting from the field overall and won the glass 44-40, but committed 17 turnovers to the Chargers’ 11.

“We executed the game plan that coach gave us,” Lewis said. “That was play play hard, move the ball, make one more pass, and that’s what ultimately led to my 26 points. It’s all due to my teammates. They got me the ball all night.”

Lewis marveled at the game’s atmosphere, calling it “like a tournament” matchup.

“You saw how intense it was and you see this crowd,” Lewis said. “It’s just a great game to play in and I’m glad I could participate in the last one ... if that’s what it was.”

It was the last known one for at least the coveted Longfellow Trophy. The Chargers finish with a 26-22 advantage in that portion of the series and with a 9-7 edge in holiday-related meetings. The Blazers remain up 8-7 in sectional showdowns.

Next: SB Adams vs. Central at North Side Gym, Memorial at Mishawaka, both Tuesday.

48th year ? The first graduating class of central and memorial was 1973

Elkhart Memorial opened it's doors in 1972. The first graduation was the next spring 1973!