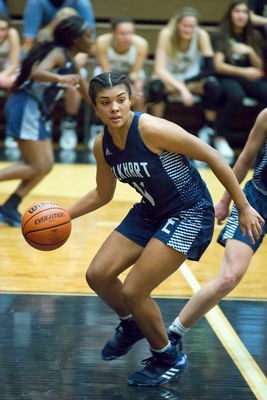 Elkhart Central's Makaya Porter looks to pass after coming down with a rebound during the first half of the Blue Blazers' loss to Penn on Tuesday night. 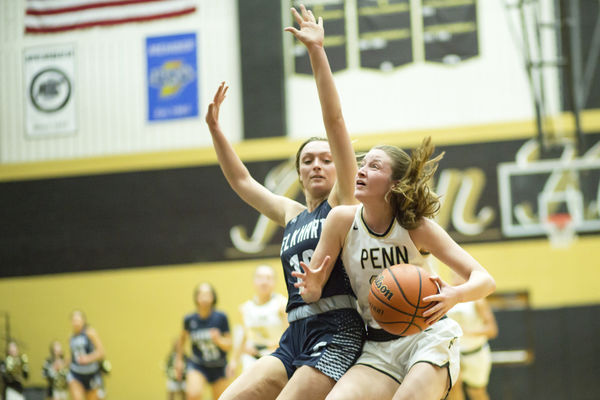 Penn's Reganne Pate is attacking the basket against Elkhart Central's Julee Miller in Tuesday's game, which was won by the host Kingsmen, 57-41.

Elkhart Central's Makaya Porter looks to pass after coming down with a rebound during the first half of the Blue Blazers' loss to Penn on Tuesday night.

Penn's Reganne Pate is attacking the basket against Elkhart Central's Julee Miller in Tuesday's game, which was won by the host Kingsmen, 57-41.

"That was a wasted timeout," shouted Coatie towards his team.

Another turnover by his team seconds after he had called a timeout brought that outburst from Coatie, whose team committed 12 first half turnovers in a 57-41 loss Tuesday to No. 7-ranked (Class 4A) Penn.

With the win, streaks remained intact for the Kingsmen, who extended their win streak to 30 games over the Blue Blazers and won their 34th straight Northern Indiana Conference game.

Penn, which improved to 9-0 in the NIC and 18-2 overall, also are in the the driver's seat to win a third straight conference title.

"Turnovers hurt us," said Coatie. "We needed to come out with a better sense of urgency and get off to a fast start.

"It was a game between two unbeatens (in the conference). I think we played a little tight, instead of going out there and playing our style of basketball."

Penn started to pull away after Central second leading scorer Yiesha Williams (19 ppg) picked up her second foul with 1:09 left in the first quarter. The Blue Blazers trailed only 9-8 before Williams went to the bench. When she returned to the court with 7:02 left in the second quarter, the Kingsmen had extended their lead to 19-10.

"Momentum-wise that kind of hurt us," Coatie said about Williams' foul trouble.

Williams return to action didn't shift momentum towards Central, instead Penn made shots from the field (11-of-21) and free-throw line (9-of-10) and didn't turn the ball over (3) during an impressive first half. That crisp play helped the Kingsmen take a 32-17 lead into halftime.

"We've been striving for consistency for 32 minutes," said Penn coach Kristi Ulrich. "I felt that overall, especially in that first half, that we were really consistent on this big stage."

"You need to do the basics and be disciplined on defense," Coatie said. "We didn't do those things, like getting in our gap help. We let (Trinity) Clinton and (Jada) Patton get downhill and score a lot."

Clinton scored 25 points, grabbed five rebounds and had four steals for the Kingsmen.

"I just played my game," said Clinton. "I attacked, read the defense and hit open teammates."

"She's a special kid," Ulrich said about Clinton. "She explosive and dynamic. She's changed positions this year and is playing more of a point guard role. She's really settled in and done a great job for us. There's no question that she's one of the best players in the conference and across the state."

Patton came off the bench to add 15 points, while Antreese Shelton added nine and Reganne Pate had eight for Penn.

"We strive to be able to score in three areas," Ulrich said. "We have perimeter shooters and we have people that can go downhill and we also need interior play as well. We did well in all those areas tonight."

Central was only able to score consistently from the free-throw line, as the Blue Blazers finished 23-of-29 at the line.

"I told our kids (after the game) that one game doesn't define them," Coatie said. "We'll get better from this and continue to keep growing. We've got a lot of basketball still left. Tommorrow, we'll get back at it."