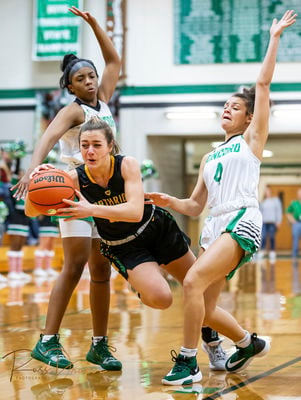 Northridge's Juliana Weaver goes to the floor hard after trying to split the defense of Concord's Jadelyn Williams (left) and Bailei Mayo during the Minutemen's 56-53 NLC victory over Northridge on Saturday. 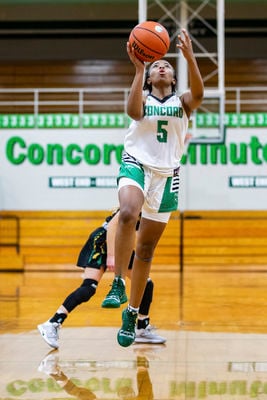 Concord's Jadelyn Williams drives to the basket for a layup during the first half of Saturday's Northern Lakes Conference game against Northridge. The Minutemen won, 56-53.

Northridge's Juliana Weaver goes to the floor hard after trying to split the defense of Concord's Jadelyn Williams (left) and Bailei Mayo during the Minutemen's 56-53 NLC victory over Northridge on Saturday.

Concord's Jadelyn Williams drives to the basket for a layup during the first half of Saturday's Northern Lakes Conference game against Northridge. The Minutemen won, 56-53.

Saturday at McCuen Gym, coach Cassie Cepeda's Minutemen nearly gave away an 18-point third quarter lead – and trailed with 1:01 left on the clock – before hitting five-of-six free throws down the stretch to post a 56-53 NLC win over Northridge.

"I am very proud of our girls,'' Cepeda said. "We showed a lot of mental toughness today where we easily could have folded. This was a total team effort today ... we all won together.''

To be fair, Concord did beat Northridge in December of 2005 in a holiday tournament.

After playing an outstanding first half, Jadelyn Williams hit a layup at the 6:12 mark of the third quarter, to put the Minutemen up 35-17 and it looked like Concord was on its way to an easy victory.

But then, the light went on for Northridge.

Led by senior Juliana Weaver, the Raiders scored 15 straight points to cut the Concord lead to 35-32 at the 3:31 mark of the third quarter on a basket by Kayla Pippenger. Weaver had eight of the 15 points in the run.

Northridge would actually take a 39-38 lead when Pippenger hit one-of-two free throws with 22 seconds left in the quarter.

"I guess we are who we are ... we have a small margin of error,'' Raider coach Doug Springer said. "We came out without a lot of energy and Concord too advantage of it and took a big lead. Once we woke up and started playing with the energy we needed, we were able to get back into the game. When you play the game of basketball with energy, you can make good things happen for yourself.''

After the Raiders' took their one-point lead, a Concord freshman made perhaps the game's biggest play.

Savannah Boerema buried a 3-pointer from the right side with four seconds left in the quarter and was fouled. The ensuing free throw made it a four-point play and gave Concord the lead going into the fourth quarter.

"That was big,'' Cepeda said. Savannah is a freshman we've been talking a lot about and today she brought her swag. She's played a lot of AAU games, so the spotlight isn't too big. We're looking forward to her doing a lot of big things for us in the next four years.''

Trailing by one point, the Raiders' Jaci Walker drilled a 3-pointer to give the Raiders a 51-49 lead with 3:06 to play.

Williams tied the game 30 seconds later with a pair of free throws, before junior Kendal Swartout hit two more from the charity stripe with 33 seconds remaining to give Concord a 55-53 lead.

Swartout's free throws came six seconds after Northridge was whistled for a offensive foul while trying to get the ball inbounds.

"The Concord girl was holding our players shorts and we got whistled,'' Springer said. "It was unfortunate, but we shouldn't have let ourselves get in that position.''

Williams would round out the Concord scoring, hitting one-of-two free throws with 18 seconds left to make it 56-53. Northridge's Maddy Wienert would have one last 3-pointer in the final six seconds, but it came up short and the Minutemen were able to run out the clock.

"I thought Northridge made some adjustments at halftime that we had trouble with,'' Cepeda said. "Plus, we're struggling at times to put 32 minutes together and today was a good example of that. But it's a nice conference win and we'll take it.''

Weaver would lead the Raiders with a game-high 22 points after going 0-4 from the field in the first half. She also had seven rebounds. Walker added 15 points for Northridge, now 3-9 on the year and 1-1 in the NLC.

"Really, the coaches have been losing our minds with this group,'' Springer said. "We have to learn how to play 32 minutes and come ready to play aggressively from the start.''

Johnson scored 17 points for Concord and hit four 3-pointers in the first half to help the Minutemen jump out to their big halftime advantage. Williams added 14 and Swartout 12 for the Minutemen, who broke a three game losing streak and improved to 8-3 overall and 2-1 in the conference.