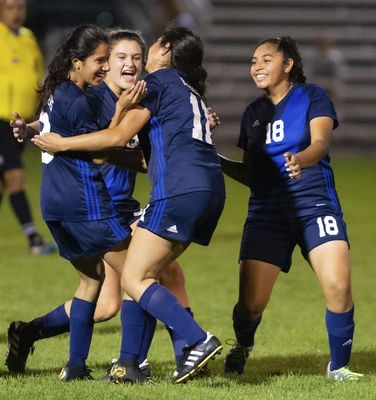 Yuritzi Alvarez (far left) celebrates with her Elkhart Central teammates after scoring the tying goal in the first half of the Blue Blazers 2-1 victory over Goshen on Tuesday at the Penn Girls Soccer Sectional. 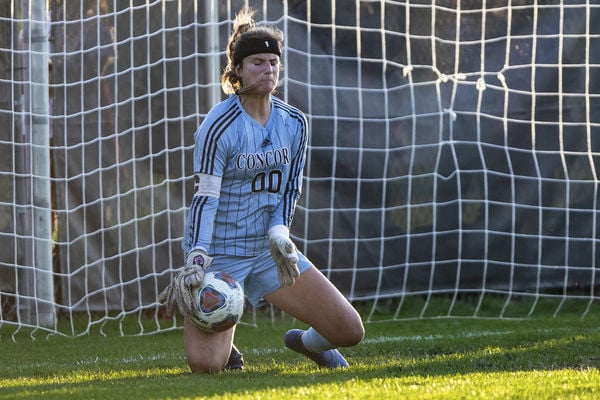 Concord goalie Kendal Swartout makes one of her 21 saves against Penn in the Class 3A Penn GIrls Sectional game against the host Kingsmen. Penn won the game 2-0.

Yuritzi Alvarez (far left) celebrates with her Elkhart Central teammates after scoring the tying goal in the first half of the Blue Blazers 2-1 victory over Goshen on Tuesday at the Penn Girls Soccer Sectional.

Concord goalie Kendal Swartout makes one of her 21 saves against Penn in the Class 3A Penn GIrls Sectional game against the host Kingsmen. Penn won the game 2-0.

While the Minutemen lost the night's opening game to Penn 2-0, Swartout was outstanding in goal, turning away an astounding 21 shots and keeping Concord in the game until the very end.

In the evening's second game, Central sophomore Macy Metcalf scored in the 47th minute and the Blue Blazers were able to hold on to defeat Goshen 2-1.

Elkhart Central and Penn will play at 5 p.m. Thursday in the first semifinal game, followed by Northridge battling Elkhart Memorial. The title game is set for 7 p.m. Saturday.

• PENN 2, CONCORD 0: While Penn controlled most of the game offensively, they were consistently turned back by the brick wall that Swartout put up in front of the Concord net.

"She is one heck of a player,'' Penn coach Jeff Hart said of Swartout. "She's very athletic, tall and really tough back there and she kept us at bay most of the game. We knew going in she was good, but I was very impressed with how well she played tonight.''

The Kingsmen scored early when sophomore Mandy Baker was in the right place at the right time, knocking in a rebound off a Swartout stop less than four minutes into the game to give Penn a 1-0 lead that would hold until the final minutes of the game.

With Concord pushing to try and tie the game late, Baker added her second goal of the night on a breakaway, getting the ball past Swartout with just 2:36 remaining in the game.

Penn's Elizabeth Hague assisted on both of Baker's goals.

"I thought we played pretty well and controlled things, but you want to be able to finish a little better than we did,'' Hart said. "During the game, like any coach, I wasn't real happy at times. But when you get to the tournament, you're just trying to win and advance and we did that tonight.''

While Concord coach Adam Kirkpatrick was disappointed with the loss, he was very proud of how far the Minutemen have come.

"We played Marian and Penn in scrimmages and lost 7-1 and 7-0,'' Kirkpatrick said. "But the girls have worked hard and battled all season and just gotten better. We start three freshman and play eight or nine, so I like what the future looks like.

"Kendall played tremendous tonight and she wasn't even full strength. She's had some problems with one of her hands or she might have been even better. She's definitely one of the best goaltenders I've seen and it will be great to have her back next year too.''

"We're leading 1-0 and had a breakaway with a real chance at making it 2-0,'' Bontreger said. "Unfortunately, we didn't convert it and a few minutes later they got a goal to tie it and take the momentum into halftime and it helped them to settle in. If we had scored and gone up two goals I think things could have been a lot different.''

Instead, Elkhart Central scored with 5:15 left in the first half when Yuritzi Alvarez scored off a rebound after Goshen's Abril Diaz stopped the original shot Blazer shot on goal.

Coach Rick Nussbaum's Central team would score the eventual game winner just seven minutes into the second half, as Macy Metcalf scored off an assist from Antonia Hiland. That score also came off a rebound.

"I know it sounds kind of strange, but this team seems to play better when we're behind,'' Nussbaum said. "I like the way we played offensively tonight, I really thought we were more creative than when we saw Goshen the first time (2-1 loss in August).''

The RedHawks, who finish 6-8-2 on the year, had a shot at tying the game with 10:40 left on the clock when junior Maddie Swallow broke free from the Central defense and had a point-blank shot that Central goaltender Harmony Whitaker was able to stop to keep the Blazers in the lead.

"We had a couple chances after they took the lead, but we just couldn't convert,'' Bontreger said. "But give Elkhart Central credit, they made a couple more plays than we did and got the victory.''

Goshen's goal came in the 30th minute, when Alessandra Lozano took a perfect pass from Joya Drenth off a free kick and burried a shot into the corner of the net.

Sorry, there are no recent results for popular articles.

Sorry, there are no recent results for popular images.