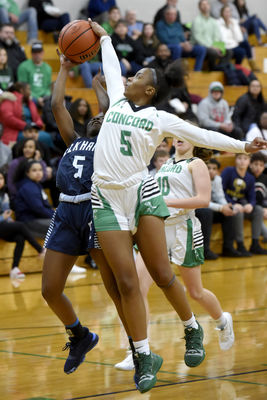 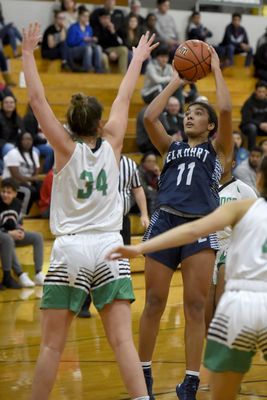 DUNLAP — Elkhart Central girls basketball coach Will Coatie says that up to 20 different defenses can be used by his team during games.

Concord had no answers for the variety of defenses thrown at them by the Blue Blazers in Wednesday's non-conference game, which Central won impressively, 67-30.

Active hands and feet in all the defenses played by Central forced Concord into 18 turnovers and caused the Minutemen to shoot only 25-percent (12-of-47) from the field.

"We pride ourselves on playing good defense," Coatie said. "We do a lot of defensive stuff. Our kids really came out and set the tone with our defense tonight. I'm just super proud of our kids the way they came out and had a sense or urgency.

"Credit goes to our kids to continue to know our defenses, especially when we're switching them up like every other time on the court. They're willing to buy in to what we continue to keep preaching every day."

Central, which totaled 13 steals, started to score consistently in transition off its defense in the second quarter. A 10-5 first quarter lead for the Blue Blazers ballooned into a 32-13 advantage at halftime.

The Minutemen missed 10 of their 13 shots in the second quarter and turned the ball over five times.

"I thought the physicality affected us," said Concord coach Cassie Cepeda, whose team dropped to 11-5. "Right from the start we didn't match (Central's physicality). We were back on our heels and looked very tentative. Hats off to Central. We could never find our rhythm or our pace of play."

In the second quarter, Cepeda called two timeouts to try to subdue Central's momentum and motivate her own team.

"I was encouraging them to compete," Cepeda said. "I thought flat-out tonight we got out competed and out worked in every aspect of the game. We were just trying to light a fire on them to just compete. It was just not there at all tonight."

The ability to score in the paint produced a sizzling 63-percent shooting percentage (27-of-43) for Central.

Rebounding was also an area of strength for the Blue Blazers, as the visitors finished with a 35-18 rebounding advantage. Six different players grabbed at least three rebounds for Central.

"It was a gritty effort by our kids all night long," Coatie said. "Everybody has a role and knows their role. They just continue to do great things. Nobody here has an ego. This group of kids get along. They continue to just keep working every day and striving to get better."

Central got off to a slow start because of turnovers. The Blue Blazers turned the ball over eight times in the first quarter.

"Sometimes you're going to make those mistakes when there's a lot of emotion and a lot of energy at the beginning," Coatie said. "We told our kids it's a long game and that they needed to take their time."

"We've just got to move on and get back to work and kind of forget about this game," Cepeda said. "Basketball is a long season and we're going to get ready for Goshen (on Saturday)."