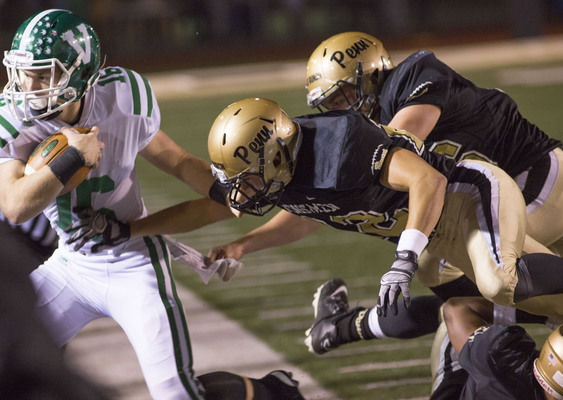 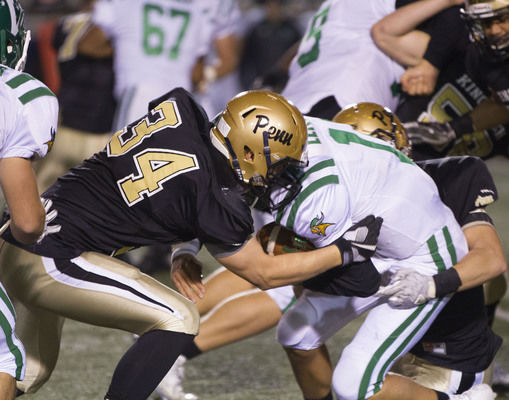 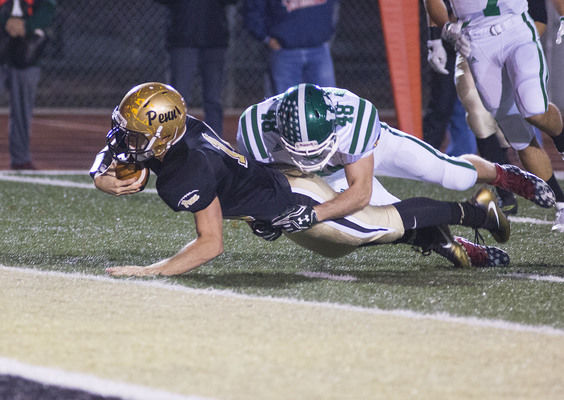 Elkhart Truth photo/Sam HouseholderPenn running back Landon Martz pushes his way into the end zone through Billy Baldwin for a touchdown Friday, Oct. 28, 2016, against visiting Valparaiso. 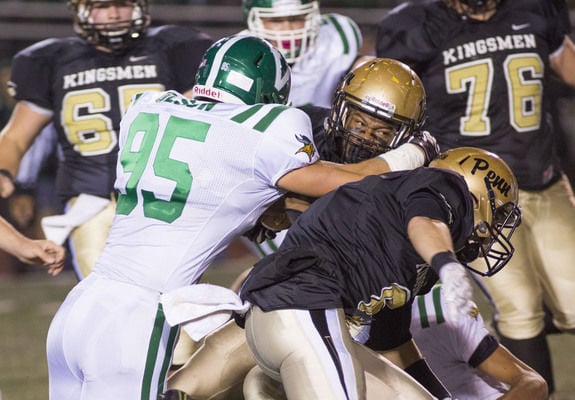 Elkhart Truth photo/Sam HouseholderPenn running back Landon Martz pushes his way into the end zone through Billy Baldwin for a touchdown Friday, Oct. 28, 2016, against visiting Valparaiso.

Defense and special teams hepled carry the No. 2-ranked Kingmen past the Vikings 35-7.

Penn (10-0) advanced to next Friday's sectional championship at LaPorte (9-1).

The defense and special teams were so good that Penn led 14-0 before even registering a first down.

Less than a minute into the game, Parker Adkins grabbed an interception and ran 27 yards to give the Kingsmen possession of the ball at Valparaiso's 9. Penn quickly scored, getting a 9-yard touchdown run from Landon Martz to take a 7-0 lead with 11:09 left in the first period.

Later in the opening quarter, Matt Kominkiewicz raced up the field 84 yards for a score on a punt return.

"That was a huge punt return by Komo," Penn coach Cory Yeoman said. "That put us up by a couple scores and it was a big play."

A blocked punt by Reece Treber set Penn up at Valparaiso's 31. Ten plays later, Rashid Maclin scored on a 1-yard run to give the hosts a 21-0 lead with 7:51 left in the second quarter. On that drive, the Kingsmen got their initial first down in the game on a 4-yard run by Landon Martz on a 4th-and-4 play with 10:56 left before halftime.

"That was a good defense we faced," Yeoman said. "Our offense kept plugging on and tried to find ways to keep moving the ball."

Valparaiso (5-5) get some momentum going into halftime. The Vikings cut the Kingsmen's lead to 21-7 after getting a 32-yard touchdown pass from Jake Leffew to Jameson Bisacky with 59 seconds left in the second quarter.

"We knew we were going to have our hands full with their wide receiver," Yeoman said. "That Bisacky kid is a heck of a player. I thought we had him doubled, but great players make big plays. That was a heck of a play by him."

The Vikings had a chance to pull even closer to start the third quarter. After getting a 73-yard punt return from Patrick Kelly, Valparaiso had the ball at the Kingsmen 19. But the Vikings came up empty as kicker Lucas White had his 35-yard field goal go short and wide left.

"Our defense had its backs up against the wall a few times and stood tall," Yeoman said. "They played extremely well."

On Penn's next drive, quarterback James Iapalucci found wide-open Anthony Torres at Valparaiso's 33 and Torres sprinted to the end zone to complete the play.

Penn's defense came up with final score on the night as Bailey Mott ran an interception back 102 yards with 9:34 left.