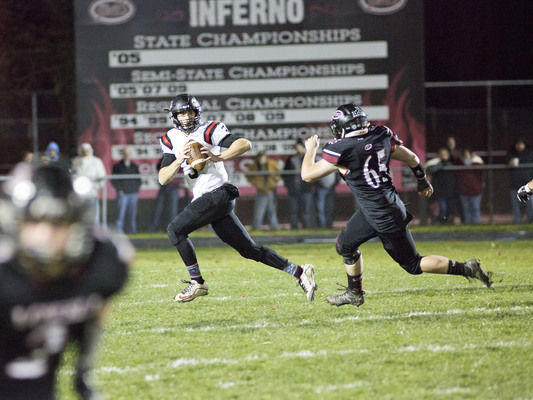 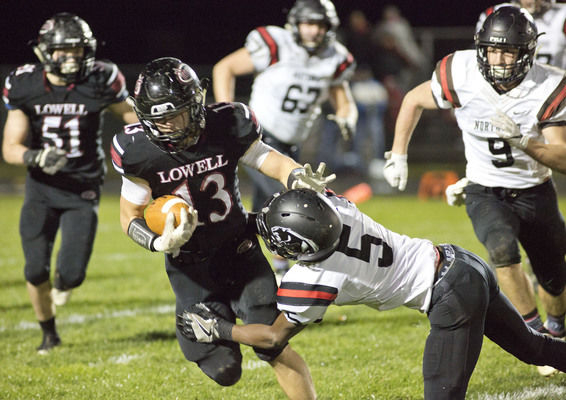 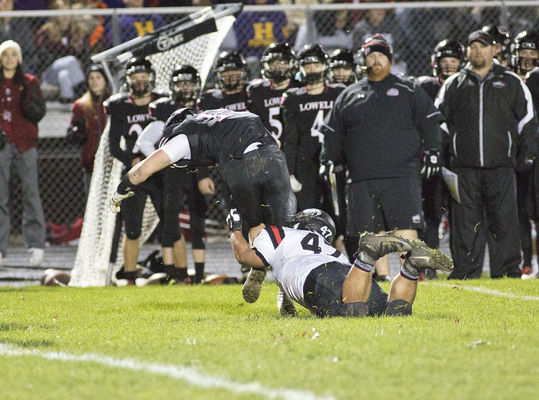 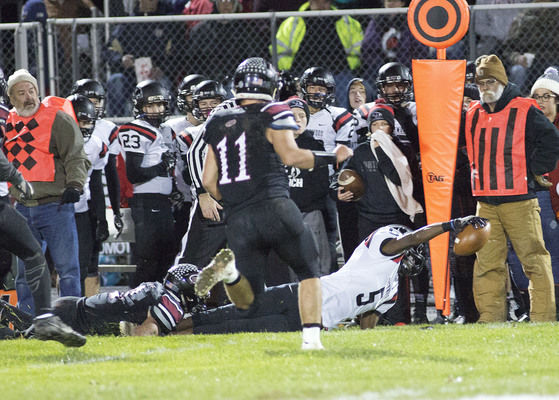 Elkhart Truth photo/Sam HouseholderNorthWood receiver DeAndre Smart reaches the ball out for the first down during the game Friday, Nov. 18, 2016. 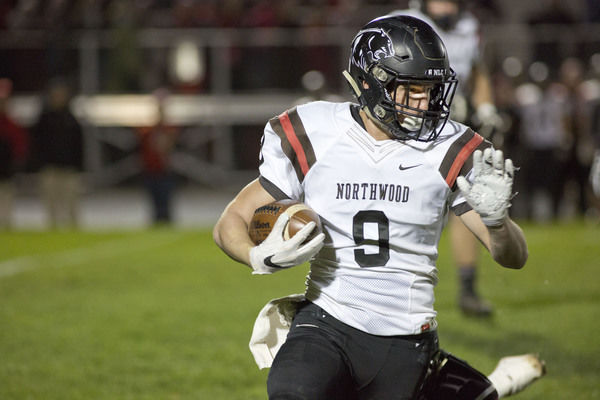 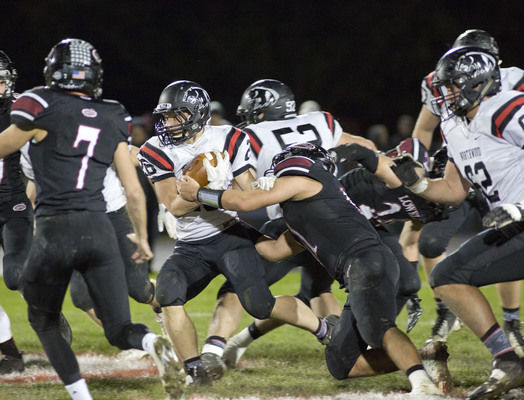 Elkhart Truth photo/Sam HouseholderNorthWood receiver DeAndre Smart reaches the ball out for the first down during the game Friday, Nov. 18, 2016.

LOWELL — Even by ordinary standards, and monstrously more so by their own, Trey Bilinski and Bronson Yoder put up some eerie-bad, seemingly flame-out numbers Friday at The Inferno.

Oh yeah, they also connected on the do-or-die play that helped vault NorthWood into a state championship.

With the Panthers trailing 14-13 and facing fourth-and-8 in the closing minutes against the Red Devils, Bilinski calmly spun a perfect pass to Yoder on a down-and-out for a 22-yard gain to the Lowell 1.

Bilinski scored on the next play with just 1:53 left, and for poetic measure, Yoder added the two-point conversion on another pass from his senior quarterback.

Then Yoder, a sophomore, clinched the state trip by intercepting a deflected pass at his own 28 with 31 seconds remaining.

Still, it was that precisely executed 22-yard hook-up between him and Bilinski that made the difference. A slip-up by either and NorthWood's magical season would've been over.

"I got up in the defender's nose and right when I made that cut," said Yoder, "I could tell it was wide open, and I knew Trey was going to pass me the ball and put it right where it needed to be."

"Coach (Nate Andrews) always tells me that big-time players make big-time plays in big-time games," Bilinski said. "That was going through my head at that point. I knew I had some incompletions early on, but I had to put that behind me and we just had to execute."

Bilinski, who headed into the night having completed 62 percent of his passes for an average of 241 yards per outing, closed at 7-of-24 for 72. And two of those completions were actually backfield forward pitches of about a foot through the air to Yoder.

As for Yoder, owning 813 rushing yards and a 5.3 average going in, he was stuffed to the tune of nine attempts for just 3 yards by Lowell.

Of course, there was an explanation. The Devils (9-5), who had belied their overall record with a string of seven straight dominant wins, were dang good.

"That was definitely the best defense we've played all season," Bilinski said. "They were giving us fits at times, but we did get it going in the second half, figured it out, put some points on the board."

Typical of NorthWood, it was an effort featuring key plays by many.

"I made one great play. Everyone else made continuously great plays," Yoder claimed.

"(This is) sheer pandemonium," said Andrews, the Panthers' third-year, home-grown head coach, as he soaked in the postgame celebration. "I'm just happy for these kids. They are great kids, and not only these guys, but several of the (graduated) guys from our last couple years who are out here enjoying this. They're certainly a part of it. They helped create that foundation."

NorthWood overcame decisively its closest call of the season.

Lowell went up 14-7 with a nine-play, 65-yard touchdown drive to open the second half, capped by a 1-yard tally from star running back Trevor Espravnik on his way to a 43-carry, 188-yard night.

The Panthers answered on their first possession of the half as Bilinski hit DeAndre Smart with a 9-yard score to cap an eight-play, 70-yard march, but for the second time on the evening, the visitors were penalized 5 yards before the conversion.

NorthWood typically goes for two points, but for the second time, the Panthers went for one after the penalty, and this time the kick was wide, leaving them down 14-13.

After that, the Devils had two promising opportunities to extend their lead, beginning their next possesion at the Panther 49 after a strong kick return, only to have a couple errant snaps stall them, and then pounding their way from their 25 to NorthWood's 36 on their following drive.

That one, however, was halted by Payton Bear and Yoder combining to stuff Espravnik for no gain on fourth-and-3.

NorthWood's defense stiffened even further with its next chance, notching a three-and-out that led to the Panthers getting the ball at their own 41 after a punt with 5:07 to go.

Such began the game-winning drive, one that included a third-and-21. On that pivotal play, Bilinski hit Landen Gessinger for 13 yards, and a 15-yard tack-on for a face mask gave NorthWood a first down at the Devil 25. Four plays later, Bilinski and Yoder unleashed the 22-yarder.

When the game was over, Panther players seemed initially reserved in their celebration, as if catching their breath.

"I'm about dead right now," senior two-way standout Drew Minnich said with a smile. "It was a very hard-fought battle and they're a great team."

It was Minnich who had scooped up a teammate's fumble and turned it into an oddball 31-yard touchdown to open the night's scoring midway through the first quarter.

The Devils got a similarly fortuitous bounce just before halftime when Logan O'Hanlon went for a 31-yard TD with a loose ball after teammate Chandler Austgen's blocked punt.

"We had a feeling it might be that way," Andrews said of the perseverance that was required on a night his club was limited to 21 points and 189 yards despite entering with averages of 46.8 and 501. "I think we played one of the most physical football teams in the state, and the elements were not ideal for us. With how they run the ball and the elements, we were OK with punting, which is not us."

NorthWood, which set a program record for wins, advanced to its first state title game since 2005, the year the Panthers won their lone title. Overall, they earned their seventh state trip.