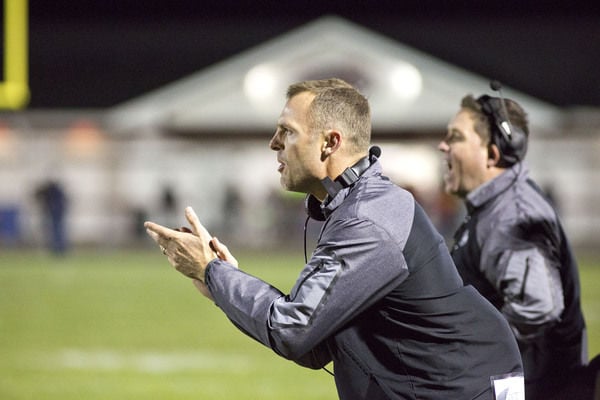 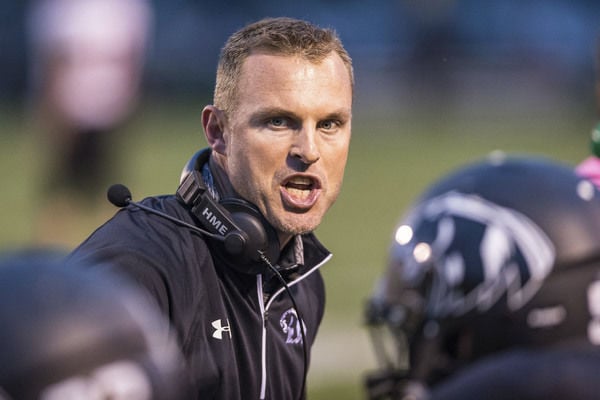 Elkhart Truth photo/Russ DraperNorthWood head coach Nate Andrews gets the Panther offense fired up to take the field in first quarter at Andrews Field as they square off with the Warsaw Tigers on Friday, Oct. 7, 2016, in Nappanee. 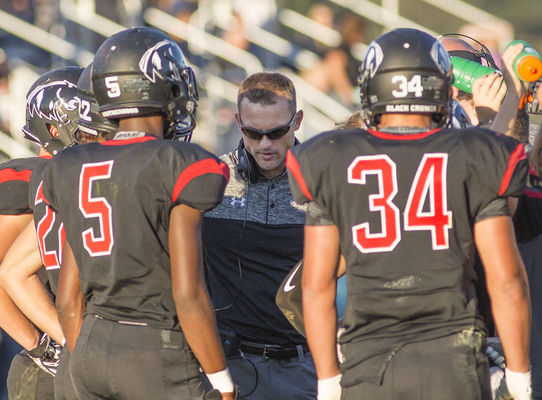 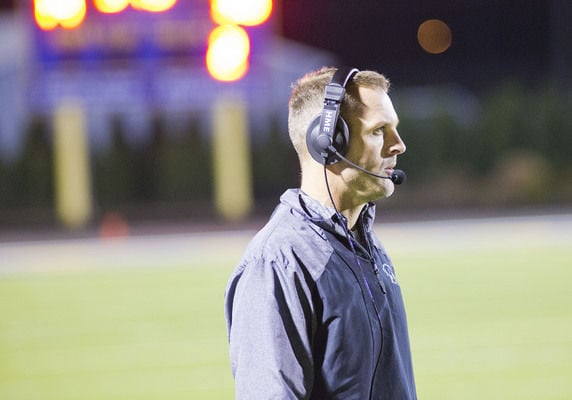 Elkhart Truth photo/Russ DraperNorthWood head coach Nate Andrews gets the Panther offense fired up to take the field in first quarter at Andrews Field as they square off with the Warsaw Tigers on Friday, Oct. 7, 2016, in Nappanee.

He wasn't even angry then.

"No doubt about it, I would've told you that when I was a kid," Andrews said of his feelings when he lost his father, legendary NorthWood head football coach Jim Andrews, in a March 8, 1992, car accident.

Nate Andrews, 39, is wrapping up his third year on the job that his dad occupied for 20. He coaches home games at the field named for his father.

"It stinks that you don't get to share in the best moments," said Nate, who will guide the Panthers into Friday's Class 4A state championship against fellow unbeaten Indianapolis Roncalli at Lucas Oil Stadium. "And people would say this (game) is the best moment, that he'd be so proud, and, well, yeah, he would be, but it's not like that.

"It's missing little things. It's, 'Hey, Dad, how would you handle this ballgame?' (It's) my wedding, the birth of my kids. ... Those are the hard ones," Andrews said.

While his family brings him on-the-sleeve joy, one also doesn't need to strain to see sadness emerging from Nate Andrews' face and hear it emerging in his choked-up voice nearly a quarter-century later as he shares the degree of loss he's felt without his father in his life.

But anger? The man who exudes an 8-year-old's energy and an 80-year-old's soul says his faith has trumped that one.

MAN OF THE HOUSE

From the instant the accident happened, there wasn't much time for that.

And Trevor Andrews made sure his younger brother understood as much.

"He was 16 years old then and he sat me down and looked me straight in the eye and said that we gotta be the men now," Nate recalled of Trevor. "My sister (Kelli, 12 at the time) and mom (Sheri) were both in the vehicle. We didn't know if either one of them was going to make it to be honest. They both went through a lot (physically) and still do. I'm thankful we still have them."

Trevor Andrews was preparing to leave for college in a couple years, making Nate the man of the house in his absence.

"I knew my mom and sister were hurting and I'd be going away to college and it would be the three of them," Trevor said. "I knew Nate would handle it."

What Trevor and Nate both remain emphatic about, though, is that their childhoods were not destroyed.

He cites the community in which he grew up as partially responsible for that.

"A lot with me is internal, but at some point you have to have some encouragement – some outside influence," Nate Andrews said. "And I feel that here."

Given the community support he received after his father's death and the strong legacy Jim Andrews left building the Panthers program into a perennial power, Nate Andrews yearned for a chance to lead NorthWood's football program in his father's footsteps. Nate Andrews described it as his "dream job" when he was hired three years ago.

The opportunity came after spending several years as an assistant at Zionsville, then a combined seven years as head coach at Lapel and Western.

"No matter where I'm at, I want to coach hard and develop better young men," Andrews said. "It's special here because there are a lot of people here who I feel like helped raise me."

Trevor, who is associate head coach at the College of William & Mary in Williamsburg, Va., and in his 16th year there, acknowledges that at one time he imagined himself as the head coach at NorthWood as well, but "I fell in love with the college game once I played it ... and it became more and more evident Nate wanted it, so I kind of backed off. It's his ultimate deal."

That flies in the face of how competitive Trevor and Nate were as youngsters.

"Our relationship growing up was that I used to pick on him, nag at him," Trevor admitted. "He was a little bit of a neat freak. I would mess with stuff in his room to get a rise out of him and it drove our parents nuts. But it was also a very competitive relationship as far as sports. He was always nipping at my heels, but I was always 20 months older, so I was bigger, stronger, faster."

The brothers were both elite three-sport athletes at NorthWood before Trevor headed off to play football at Dayton and Nate went to play at Ball State.

As a senior, dual-threat Trevor quarterbacked the Panthers to the 1993 3A state title game against Roncalli, ending with a 14-12 loss to the Rebels. He was named Indiana's Mr. Football runner-up.

Nate as a sophomore was a key two-way performer for the Panthers and added two more unbeaten regular seasons as a standout player under Rich Dodson, who several years later became his stepfather.

Each brother also starred in wrestling, with Trevor emerging as state runner-up at 171 pounds as a senior, then Nate winning that same weight class two years later as a senior.

Nate finally got the upper hand on his older brother in the 100-meter finals at the NLC championship track meet.

"I wanted was to be the fastest guy in the NLC, and then he smoked me in the finals," Trevor said of Nate. "He obviously went on to be much faster than me, but I was so sad at the time. I was in shock when he came up to me, so I don't know what he said. But for as competitive as he is, I think he almost felt guilty."

If so, it's one of many sensitive things tough guy Nate Andrews has felt – be it about his dad, his family, his faith or NorthWood football.

"He is wound tight," Trevor Andrews agreed of his brother's intensity. "But his heart is always in the right place. And with Nate, it's not about him, but his family, that community and those kids he's leading."