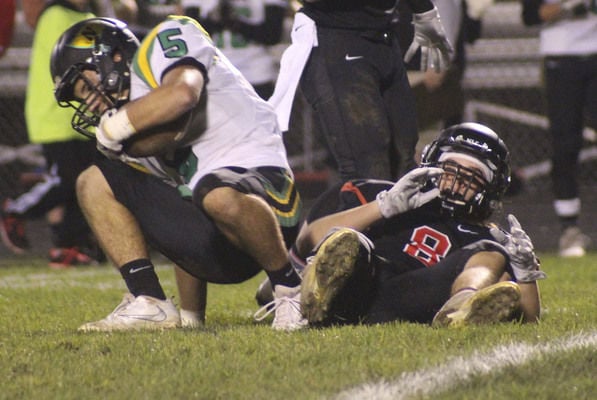 Elkhart Truth photo/ Paige Mallory PassmanNorthridge’s Brad Schwartz (left) gets up after being tackled by NorthWood’s Landen Gessinger at NorthWood on Oct. 28, 2016. 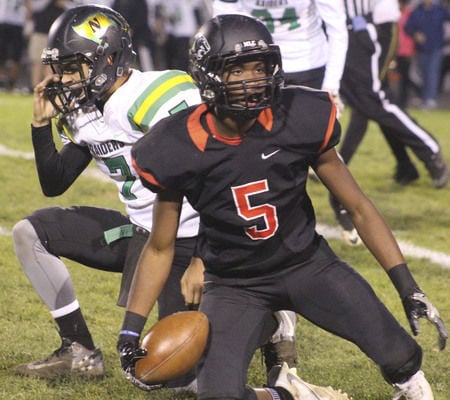 Elkhart Truth photo/Paige Mallory PassmanNorthWood’s DeAndre Smart (5) looks toward the sideline after makign a play as Northridge’s Julius Graber makes the stop at NorthWood on Oct. 28, 2016. 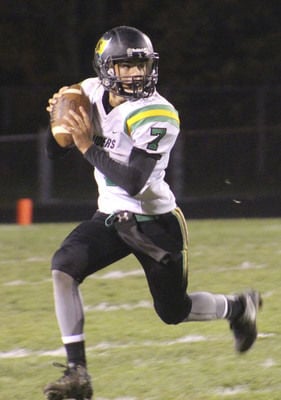 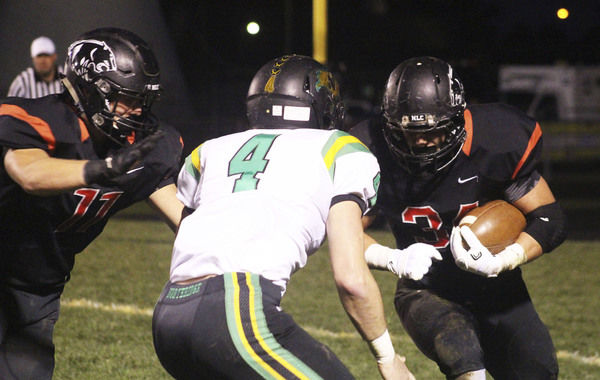 Elkhart Truth photo/ Paige Mallory PassmanNorthridge’s Brad Schwartz (left) gets up after being tackled by NorthWood’s Landen Gessinger at NorthWood on Oct. 28, 2016.

Elkhart Truth photo/Paige Mallory PassmanNorthWood’s DeAndre Smart (5) looks toward the sideline after makign a play as Northridge’s Julius Graber makes the stop at NorthWood on Oct. 28, 2016.

NAPPANEE — Brayton Yoder ripped off NorthWood's longest offensive play of the night in a 44-13 Class 4A sectional semifinal win over Northridge on Friday at Andrews Field.

No particular surprise there, but the junior also happened to record the longest play of the night among those that started out with Northridge on offense.

Yoder's 70-yard interception return 2:31 into the third quarter punctuated the No. 2-ranked Panthers' all-around prowess and gave them a 38-7 lead as they sailed into a sectional championship next Friday at East Noble (8-2).

"I was dropping back and I saw their receiver wasn't really watching the ball when the quarterback threw it," Yoder said of his in-stride pick-six along the sideline from his cornerback position. "I bit on it and luckily I caught it. ... It was a rush. I wasn't sure I was going to be able to outrun them, but it was a huge rush when I did."

"The thing about Brayton is he's trying to adjust, learn a bit on the run, learn how to play defense," NorthWood coach Nate Andrews said of a two-way performer who also finished with a team-high 86 yards rushing, including a 54-yard scamper. "He's a natural offensive player, but because of his speed, we need to play him on defense. He's learning."

Mostly, though, the Panthers (11-0) were schooling rather than learning Friday.

Quarterback Trey Bilinski fired four first-half touchdown passes, two of them to Drew Minnich during the final minute of the second quarter — thanks to a DeAndre Smart interception sandwiched between those two scores — and NorthWood had 337 yards of offense by intermission.

"I think we got their best effort, or close to it, the first time around," Andrews said, referring to the Raiders slowing the high-powered Panthers before falling 14-0 during the regular season, "and we knew we were going to get it again.

"The thing about it is," Andrews continued, "as we told our kids, they wanted our best shot the first time around and we didn't give it to them. We tried to make it an effort this week to give them our best shot, because that's what they wanted, and that's the way it should be."

So, did it indeed wind up it your club's best shot, Coach?

Andrews paused and grinned. "We need to play better next week," he declared.

Northridge (3-8) trailed just 8-7 late in the first quarter, but a Bilinski-to-Bronson Yoder 30-yard TD bomb on the final play of the period began a parade of 36 straight NorthWood points.

Raider coach Tom Wogomon was left to wonder what might've been had the first-quarter break come with the Panthers still up just 8-7.

"We had said, let's see where we're at at the end of the first quarter," Wogomon said, "because we wanted to hopefully get NorthWood to play a little tight. You know, they've got more pressure to win than we do.

"We fought really well," Wogomon added, "but that's a really good football team, no doubt about it. Man, they stretched us. They put the ball where they need to."

Smart made all of his eight receptions for 113 yards in the first half, including a TD catch. Bronson Yoder finished with exactly 100 yards of offense, including 44 through the air on two catches with a TD and 56 along the ground on nine carries. He also had a two-point conversion, as did both Minnich and Payton Bear.

"It's a huge honor to play with these guys," Brayton Yoder said, "because they're all great guys. None of them are selfish and it's just a lot of fun to be on this team, offensively and defensively."

For Northridge, sophomore quarterback Julius Graber ran for a 3-yard score and hooked up with junior Brad Schwartz on a 58-yard TD pass. In fact, every one of Graber's seven completions went to Schwartz — good for 157 yards.

On defense, junior end Micah Yoder was a Raider force, nearly picking off one short pass, breaking up another and making a tackle for loss.

"We're a young group," said Wogomon, who started nine non-seniors on offense and seven on defense. "We'll lick our wounds and see where we're at ... but I like the core coming back. We've got some young skill. We gotta find some linemen, but this is a group that's gonna grow."