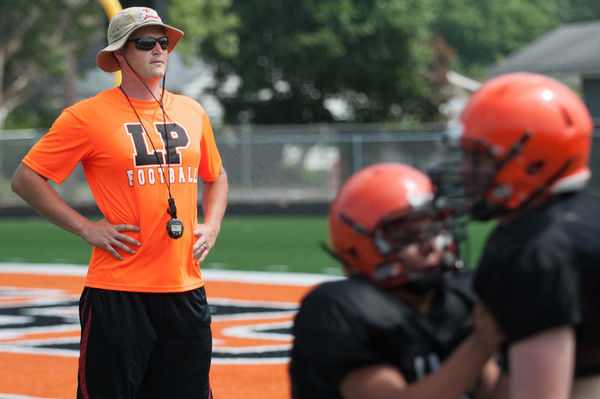 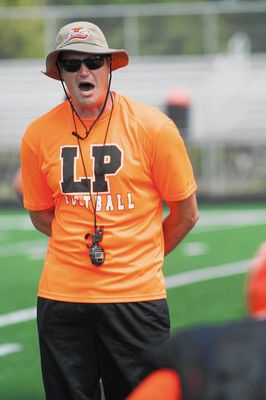 AP photoLaPorte head football coach Dave Sharpe gives instructions to his players during a practice early in the 2015 season. Sharpe, a 2000 Jimtown grad, and the Slicers host No. 2-ranked Penn in a Class 6A sectional championship Friday.

AP photoLaPorte head football coach Dave Sharpe gives instructions to his players during a practice early in the 2015 season. Sharpe, a 2000 Jimtown grad, and the Slicers host No. 2-ranked Penn in a Class 6A sectional championship Friday.

Dave Sharpe seems to be emulating his legendary father in many ways, and doesn't mind admitting it, from the career path he's following, to embracing the inherent value of a career in education, to the dedication he's pouring into his efforts, right on down to the X's and O's of his football teams.

"Oh, wow, everything," Sharpe said this week when asked in what ways he's influenced by dad Bill Sharpe, the ex-Jimtown High School head coach. "When I'm coaching, I can hear his voice in my head from when I was playing for him. And I hear the athletic director and teacher.

"Obviously, he's my number one influence," continued Sharpe, a 2000 Jimtown grad who played for two of his father's four state title teams and assisted on another. "He's the best there is at seeing the whole picture. As an athlete, I was lucky to have him as a coach. And to have him as a dad, that's incredible."

Incredible also describes what Dave Sharpe's LaPorte Slicers have been this season relative to that program's overall history.

After eight years as an assistant at Jimtown — the first three under his father, the final five under Mike Campbell — Dave Sharpe became head coach at Jimtown rival Glenn, going 5-7 and 7-3 over two seasons, before deciding to pursue the LaPorte opening. His initial Slicer club went 6-4 last fall.

"Growing up in Jimtown, I didn't know much about LaPorte," Sharpe said, "but when I researched it, I decided to apply."

Size-wise, LaPorte's not like Jimtown at all, with more than three times as many students, but Sharpe still discovered plenty of similarities.

"It comes down to some blue-collar roots, generation after generation of tough, hard-working people," Sharpe said. "It's bigger (than Jimtown), but it's interesting. The neighborhoods are very compact, the houses on top of each other, and we get a lot of those scrappy, undersized kids who love to play the game.

"We have really tough kids, and one thing I'd say about this season is that we've won every fourth quarter with the exception of the one game we lost, so they never give up. They know it's going to be a fight to the end."

And Sharpe, 35, knows, or at least suspects, his own coaching career is still just beginning.

"Oh yeah," Sharpe said of whether he envisions himself in it for the long haul. "My dad always said it's a crazy way to make a living, but you can't live without it. ... You realize the impact you have. You can have an impact all the way to the freshman level, and the athletic field is a great classroom to try to get a message across."

Sharpe and wife Kristen, a Concord grad, have two daughters, Lindsey, 4, and Katelyn 2.

"Coaching can be a strange occupation, but my wife is incredibly supportive," Sharpe said. "We may not have much time together for three or four months, but other times, you have a lot."

Sharpe's time with his own parents continues, too. Though Kathy and Bill Sharpe, who retired as Jimtown coach in 2007 and as athletic director in 2013, are residing in Syracuse after building a lake home there, Bill has attended all but one of LaPorte's games this season.

And the man who went 288-54 in 28 years at Jimtown with 17 sectional, 10 regional and six semistate crowns to go with those four state titles, gets to see much that he recognizes with the Slicers' full-house backfields and five-man defensive fronts.

Such looks account for just some of that emulation that oozes from Bill Sharpe's son.

But, are they different in any notable football ways?

"Oh, gosh, I don't know how he was when he was in his 30s," Dave Sharpe said of his dad, "but I get pretty emotional and passionate on the sidelines. The Bill Sharpe I know was more even-keeled, but me, if we have a big play, I can't help but go bananas. He usually didn't go bananas."