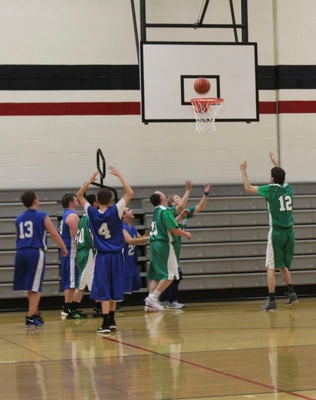 A team from Allen County plays a team from St. Joseph County during a Special Olympics basketball tournament in Wakarusa Saturday. 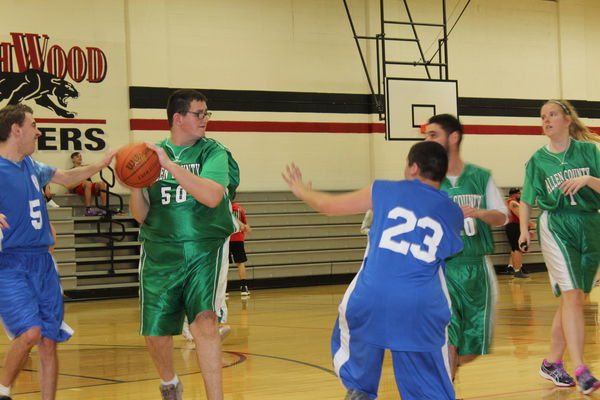 Eli Connell, Number 23, reaches for the ball as his team from St. Joseph County plays a team from Allen County during a Special Olympics basketball tournament in Wakarusa Saturday.

A team from Allen County plays a team from St. Joseph County during a Special Olympics basketball tournament in Wakarusa Saturday.

Eli Connell, Number 23, reaches for the ball as his team from St. Joseph County plays a team from Allen County during a Special Olympics basketball tournament in Wakarusa Saturday.

WAKARUSA — Teresa Rhodes has a lot of young people around who call her grandma.

The South Bend woman has been involved with St. Joseph County Special Olympics for seven years, though this is in her first year coaching basketball. She was behind one of the 27 teams from 10 counties who played in the 11th Tip-Off Tournament in Wakarusa Saturday.

The athletes under Rhodes’s watch range in age from 13 to 61. They’re grouped in teams of 12 by ability level.

“Some of them call me ‘mom’ or ‘grandma,’” she said, as another team from St. Joe County was playing a team from Allen County on one of the courts in Northwood Middle School. “They can’t always say ‘coach.’ Grandma is fine.”

Her own son is also involved in basketball, 27-year-old Tony Rhodes. He’s participated in a range of athletics in his seven years with the program, including track and field, relay, long jump and shot put, in additional to acting as assistant coach for another basketball team.

Teresa Rhodes said she decided to try out coaching after helping with fundraisers and other activities for years.

“I saw such amazing things, so when they needed help coaching, I did it,” she said. “The athletes are happy to do it. They get to compete like everybody else, and lose or not, they love it. They love doing their sports.”

The St. Joe team that was playing at the time, which included just a few of the 70 athletes who came over to Elkhart County, won its game 28-11. In addition, 14-year-old Eli Connell picked up a “good mental attitude” award during the game.

“We should go over there and show grandma,” coach Jennifer Brown told him.

Connell said it was his second year in Special Olympics. He also participates in track, softball, bowling and volleyball, but said track’s his favorite.

“It gives you the chance to play with other athletes who are somewhat like you,” he said. “It’s a learning experience.”

Joan Newell, 22, from Elkhart, also picked up a good attitude award during one of her games. She’s been in the basketball program since age 11, and also participates in track, bowling and softball.

“I like how the coaches interact with the athletes,” she said. “It really helps the athletes. It makes me feel comfortable.”

She also helps with setup and tear-down during events like this, and greets people as they come in. She helped Shailyn Matthews, coordinator for Elkhart County, hand out some of the awards after each game.

Matthews described the Elkhart County tournament as a “pre-sectional sectional,” a step on the way up to larger tournaments. She said this was the first year that they had enough players to include a senior division, for those under age 21.

She added thanks to the boys basketball players from Goshen and NorthWood high schools who volunteered as referees.

“It’s a great connection we have with the community,” she said.