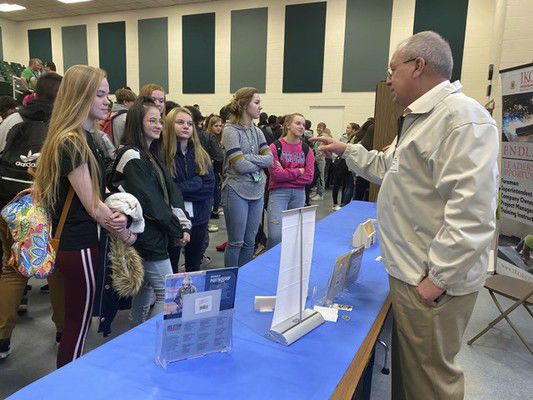 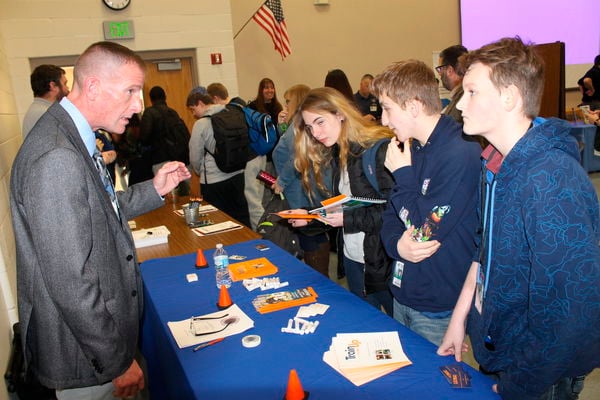 Jeremy Brewer,left,  speaks to students about possible careers in skilled trades during Concord High School’s first-ever “Career in the Trades” event on Thursday. 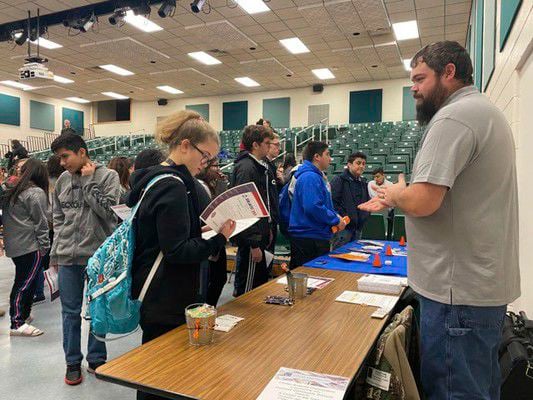 Dan Corwin speaks on electrical trades with freshmen at Concord High School during the school’s first-ever Career in the Trades event on Thursday.

Jeremy Brewer,left,  speaks to students about possible careers in skilled trades during Concord High School’s first-ever “Career in the Trades” event on Thursday.

Dan Corwin speaks on electrical trades with freshmen at Concord High School during the school’s first-ever Career in the Trades event on Thursday.

DUNLAP— Not every student is college-bound after high school.

To that end, Concord High School hosted a first-ever “Careers in the Trades” event for its freshmen students to expose them to other options.

The event was organized by the nonprofit Career Analysis Organization which partnered with area businesses and organizations to bring the event to fruition.

More than a handful of representatives from careers that included carpentry, electrical, plumbing, pipefitting, roofers and bricklayers were on hand to showcase job and apprenticeship opportunities in their fields.

As baby boomers approach retirement, the demand for skilled trade workers is on the rise, she said. At present, many high schoolers are unaware that skilled trades are an option for them after they graduate.

“College isn’t for everyone and sometimes people think that college is their only option,” Yoder said. “We want to educate students that there are other career options that don’t incorporate college that are equally important. With a number of people retiring from trades, we really need these young people to come in and fill those positions.”

Abraham Gordillo, founder of Reliable Roofing and Construction, told students the average skill trade salary for a beginner is $26,000 per year while most experienced workers make up to $80,826 per year.

“I never imagined myself being a doctor, lawyer, and I would very much dislike being an accountant, yet, we all need doctors lawyers and accountants,” he told the students. “The same goes for us tradesmen.

“We are in a decline and the demand is growing. We all learn differently and not all of us are good students in an academic setting and require hands-on training,” he continued. “The trades are a great choice for you.”

After high school, Skyy Oliver said she previously wanted to go to college and pursue a psychology degree, but after Thursday’s event, she’s now unsure.

“This event was really an eye-opener and made me question what I want to do for a career now,” she said. “I can still see myself going to college, but I can also see myself doing carpentry.”

Another student, Jaydan Spurlock, said he doesn’t believe he’ll attend college after high school and appreciated learning that he has other options.

“I’m grateful to know that I have a lot more opportunities than to just sit in a classroom and not have a guarantee that I’m actually going to use that degree,” he said. “I see myself pursuing skilled trades a lot more than going to college.”

Grant Edmiston said he was surprised by the multitude of career opportunities in the skilled trade field.

“You really don’t need to go to college because they teach you everything you need to know if you are willing to put in the time,” he said. “So in the end, I learned you can get far in life without much education.”

Romy Swartout, an English teacher at Concord High School, said during the first semester, the students went on field trips to explore careers that were more college-driven and Thursday was all about exposing them to other possibilities that don’t require a post-secondary education.

“A lot of kids still don’t know what they want to do after they graduate, and that’s ok, but we’re just trying to expose them to more options to make sure they have more an idea than kids did in the past, she said.