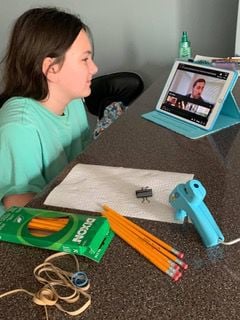 Audrey Hiatt, a fifth-grader at Moran Elementary School, listens to an instructor at Premier Arts’ new Virtual Academy before participating in a costume contest activity. 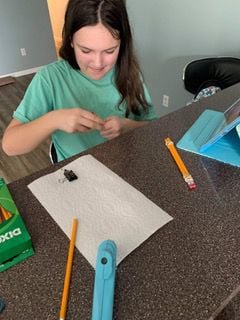 Audrey Hiatt, a fifth-grader at Moran Elementary School, listens to an instructor at Premier Arts’ new Virtual Academy before participating in a costume contest activity.

ELKHART — In the world of theater, there’s a popular phrase, “the show must go on.”

That rings true for Elkhart’s Premier Arts as the community theater group is currently adapting to a new form of stage – amid social distancing.

With the closure of the Lerner Theatre due to the global coronavirus outbreak, the nonprofit recently launched a free “virtual academy” that offers lessons to help keep people active and engaged in the arts from home, organizers said.

“People are stuck at home during this pandemic and e-learning for parents is kind of a challenge, so every day at 1 p.m. there will be a new arts-related lesson that everyone can participate in to keep them active and motivated and looking forward to something,” said Craig Gibson, executive artistic director at Premier Arts.

“We’re all looking for that silver lining and I guess to some degree the silver lining is that we’re becoming much more resourceful,” he said.

One participant, Audrey Hiatt, a fifth-grader at Moran Elementary School, said she looks forward to the new activities daily, adding that there’s always a new lesson.

“I like that we can do dance and also get voice lessons,” she said. “It’s fun to do while being stuck at home.”

The Lerner Theatre, where the group typically operates, is closed through at least the end of April, forcing the group to explore a new way of preparing for its upcoming production of “The Sound of Music.”

For this production, Premier Arts recently held virtual auditions. More than 100 prospective cast members were narrowed down to 37, making it the smallest cast the group has had.

Now, the group is rehearsing online to prepare to perform the production as soon as the Lerner reopens. Gibson said the group is hoping to showcase its efforts by the end of May or beginning of June.

“I felt that was super important during this downtime to keep going so that once we are able to gather together, we have a product to go right away,” Gibson said. “And the fact that the show we’re putting on is ‘The Sound of Music’ is a happy coincidence because (this musical) deals with people dealing with very adverse times but having ultimate hope and strength and sacrifice and coming out on the right end of it. So, I think ‘The Sound of Music’ will be just what people need to see when we gather together.”

Although making adjustments can be hectic, Gibson said the challenges aren’t foreign to the group.

“Theater is different than other occupations. We’re recreating our world every six or eight weeks,” he said. “The technical aspect of this has been a challenge, but our technical directors jumped into ‘how do we fix it’ mode and we have an interesting motto here at Premier Arts … Whenever we have something new come up, our motto is to say we start with ‘yes’ and try to set forth plans to make it come to fruition.”

As for the other lineups at Premier Arts, Gibson said he anticipates they’ll continue without modification to the date should the Lerner Theatre open as scheduled.

“Right now, we’re still operating on schedule, just differently,” Gibson said. “Nothing is known for certain yet, but as soon as we’re ready to gather, we’ll be able to perform with the community, which I think is going to be key to entertaining people and lifting the spirits and helping them put this time behind us and moving forward in a positive way.”