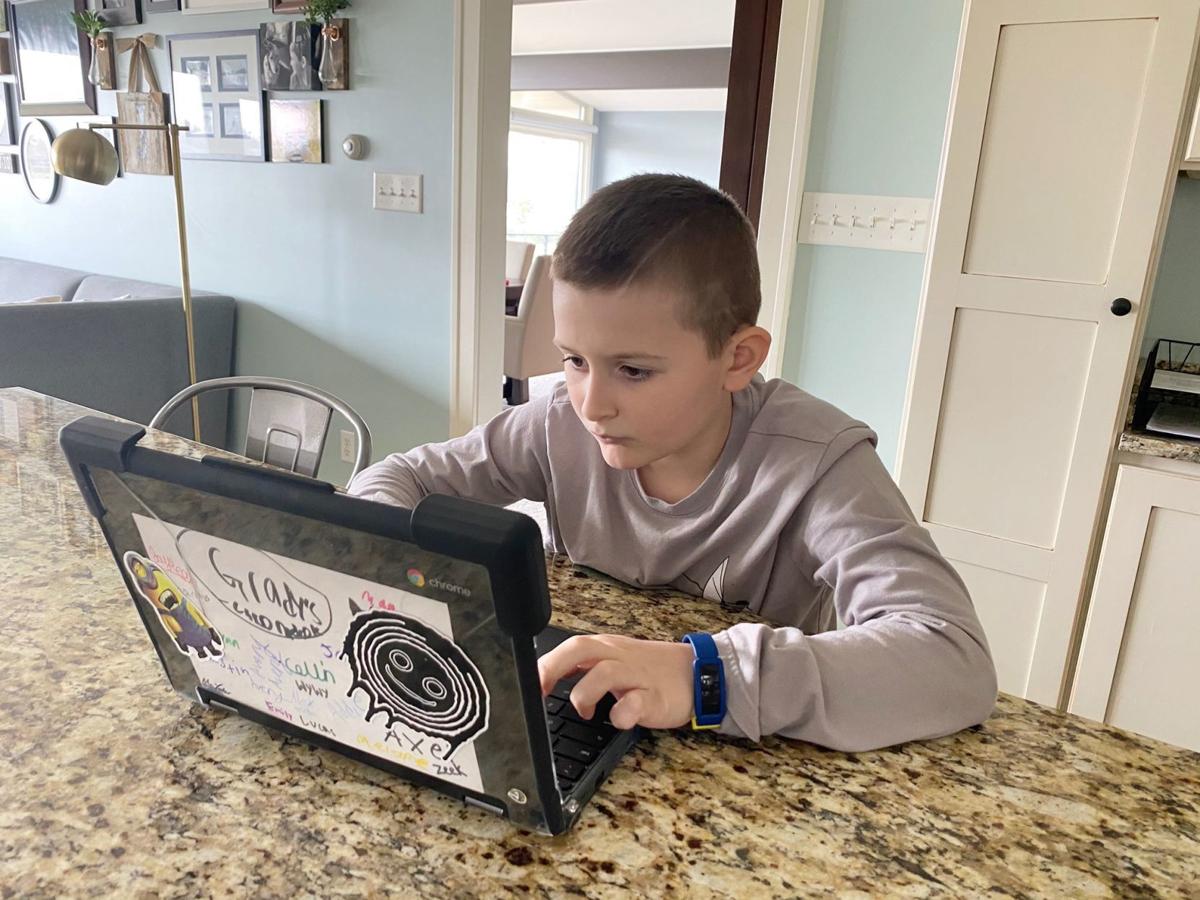 Grady Johnson, a third-grader at Concord Ox Bow Elementary School, completes e-learning work as school is out amid the coronavirus outbreak. 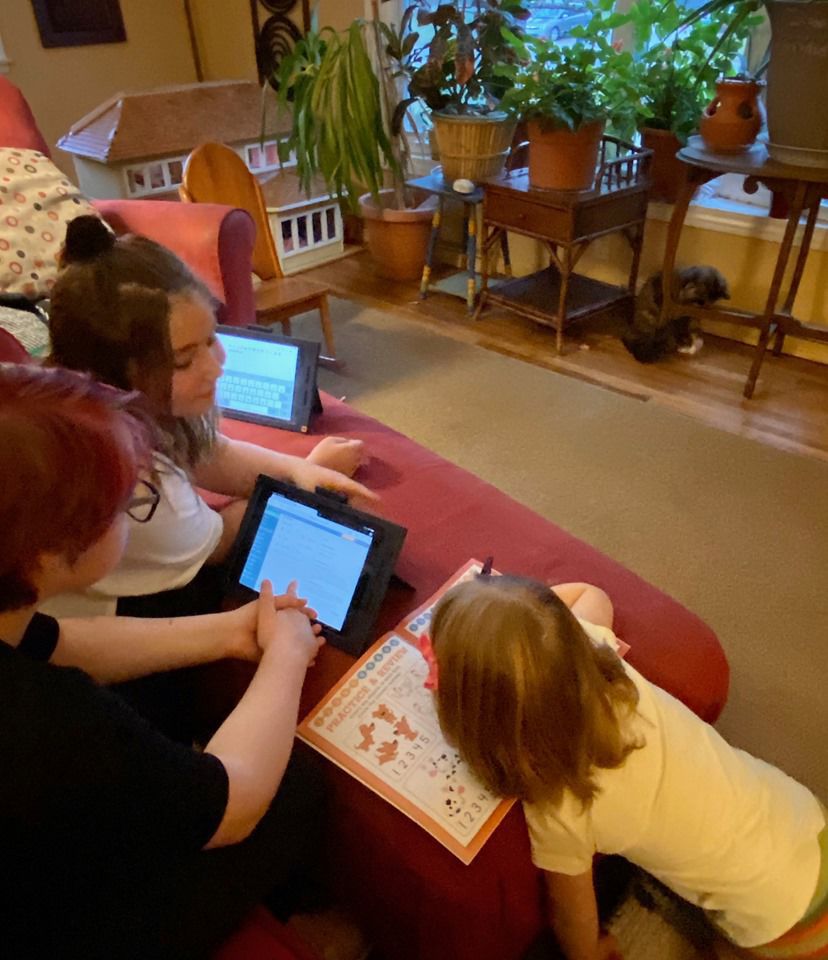 From left, Rowan, Amara and Marlow Ternet complete e-learning assignments as school is closed amid the coronavirus outbreak. 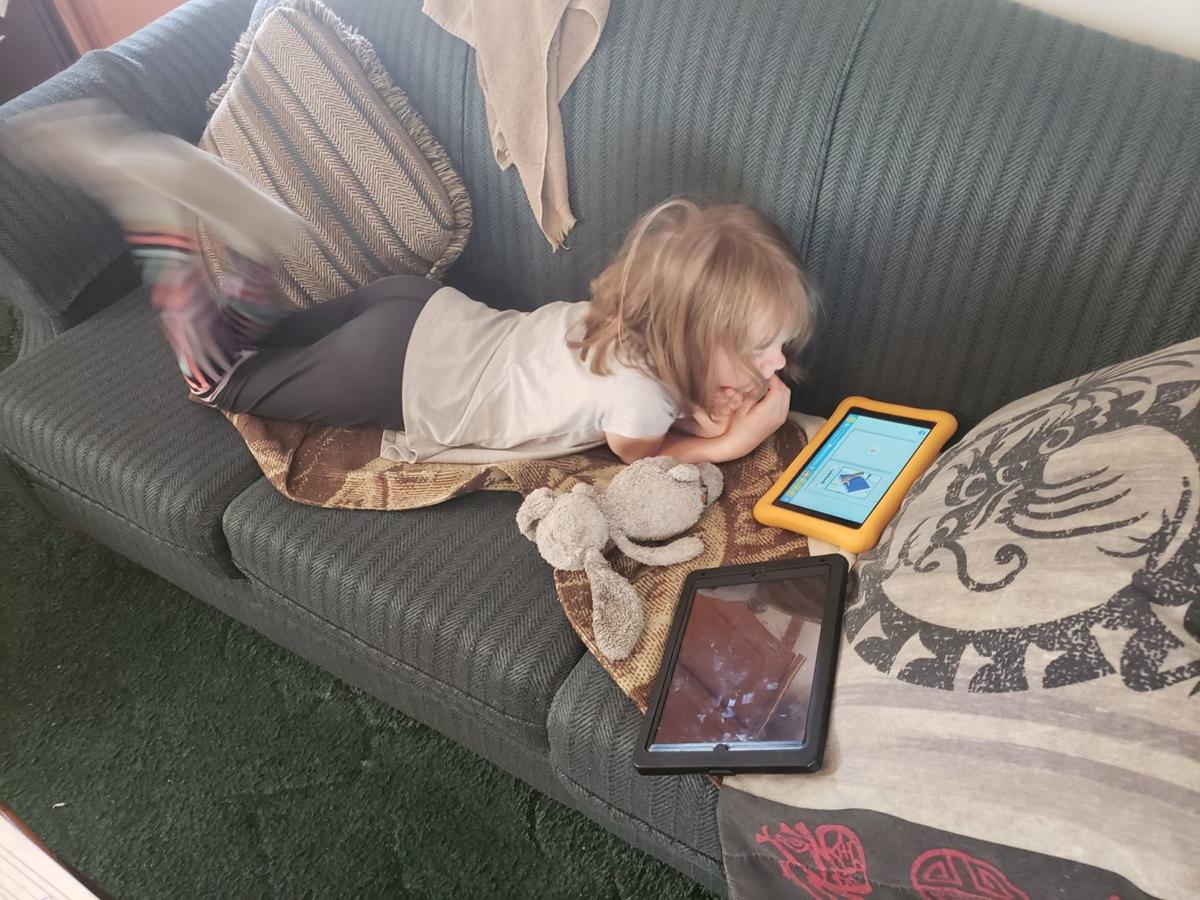 Lilith Castro, a kindergartner at Beardsley Elementary School, works on e-learning course work while school is closed amid the coronavirus outbreak. 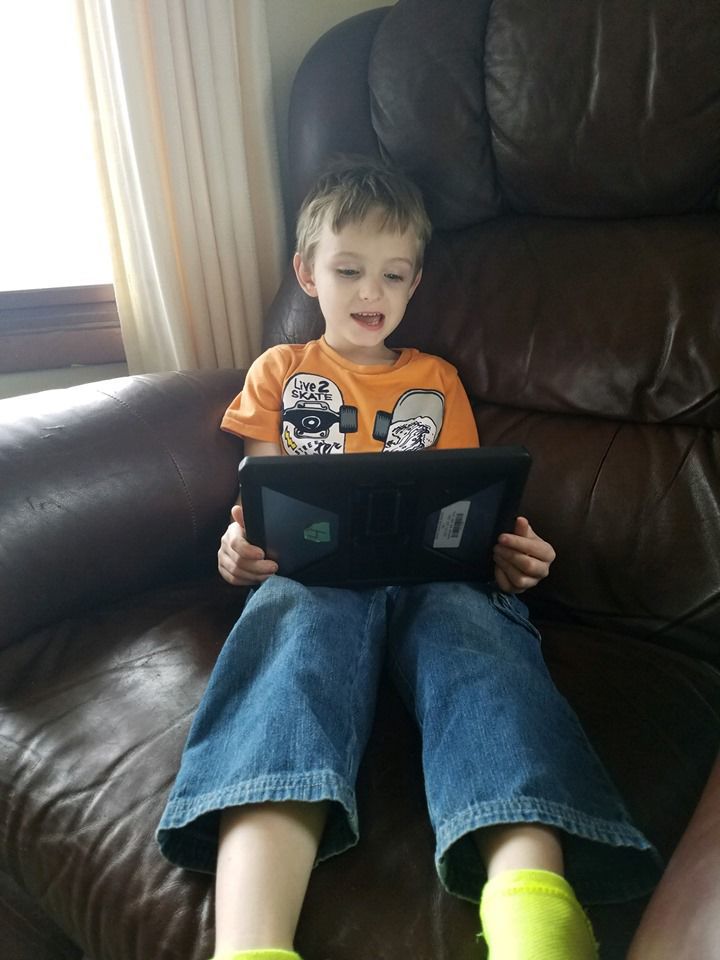 Blaytin Collins, a kindergartner at Bristol Elementary School, works on e-learning course work while school is closed amid the coronavirus outbreak.

Grady Johnson, a third-grader at Concord Ox Bow Elementary School, completes e-learning work as school is out amid the coronavirus outbreak.

From left, Rowan, Amara and Marlow Ternet complete e-learning assignments as school is closed amid the coronavirus outbreak.

Lilith Castro, a kindergartner at Beardsley Elementary School, works on e-learning course work while school is closed amid the coronavirus outbreak.

Blaytin Collins, a kindergartner at Bristol Elementary School, works on e-learning course work while school is closed amid the coronavirus outbreak.

ELKHART — The shutdown of Indiana schools to prevent the spread of the coronavirus is forcing many local parents to enter a new role as homeschool teachers.

While many parents acknowledge the need for stringent measures, they also worry whether e-learning will prepare their children for the next grade level as opposed to a traditional classroom setting.

Since schools have closed, Robert Castro said he and his former partner have taken turns assisting their 6-year-old daughter, Lilith, a kindergartner at Beardsley Elementary School, with e-learning assignments.

“I took off two weeks at work (when schools first closed), ending Friday, using up all my vacation,” he said. “Her mom is working from home at her job, but I like to help and be a source of strength during these times so it’s definitely been a change.”

To create a semblance of normalcy, Castro said at home he tries to keep his daughter on the same school schedule she had when school was in session

“She goes to bed before 10 p.m. and wakes up pretty much whenever between 8 and 9 a.m.,” Castro said. “Her e-learning days are Mondays, Wednesdays and Fridays, so when she gets up, we eat, brush teeth and all that normal jazz, then get to work doing her assignments before we can do anything fun.”

Although he said he believed closing schools was the right move, he is unsure whether e-learning alone will prepare his child for first grade.

“But at the same time, I’m surprised with all the stuff that is being taught in kindergarten,” he said. “We didn’t learn to write sentences and stuff when I was a kid. But I think with active parenting participation, just like all things, she will be OK and learning.”

Another parent, Terra Ternet, said she and her husband, Jacob, both work during the day, so trying to fit in homeschooling in the evening has created havoc.

The two have three children — Amara, a seventh-grader at North Side Middle School, Rowan, a fifth-grader at Eastwood Elementary School, and Marlow, a preschooler at Hillcrest Community Childcare.

So far, Ternet said, her kids have been adjusting to e-learning well and have been keeping up with much of their assignments on their own. She said her children typically wake up at 9 a.m., get dressed and start on their classwork early so if they have questions, they can ask their teachers.

“My husband and I have to help with some questions here and there, but they’re pretty motivated themselves, so that’s been good so far,” she said. “And their teachers have all been wonderful about getting back with them if they have any questions, which has been very helpful.”

However, adapting to a new social structure of staying at home while social distancing is becoming a challenge for the girls, Ternet said.

“They enjoy having their free time, but they’re starting to get bored and wanting to see their friends,” she said.

“Things run rampant in schools,” she said. “One case of (the coronavirus) and it probably would have been everywhere. Schools are breeding grounds for things like this.”

Despite the abrupt change in the school year, Ternet said she believes her children will be prepared next year but expressed uncertainty for students in less fortunate circumstances.

“I’m concerned for those children being raised in households where more emphasis isn’t going to be placed on education,” she said. “This could be because the parents just don’t value education or, and I think this is more often the case, because the parent is raising the child alone and/or is not financially and/or emotionally stable enough to put more focus on education. And this isn’t even taking into account the intellectual level of the parent themselves. It’s such a tough situation, and I really hope our community is able to pull together to support those families.”

For Kayla Johnson, homeschooling her son, Grady Johnson, a third-grader at Concord Ox Bow Elementary School, hasn’t been a big challenge, she said.

“I substitute teach at Ox Bow minimally, but other than that, I was already working out of home anyway, so it was pretty easy for me I guess when he had to be schooled from home,” she said.

“But it was different in that I need structure, so we did make a home schedule that both he and I can follow to make sure that we’re managing our time well.”

Overall, she said, Grady also is adjusting well to e-learning, adding that his teacher has been a great asset in helping to make the transition smooth during this unsettling time.

As for next year, she said she believes Grady will be prepared for fourth grade, but “I know that nothing replaces learning in the classroom.”

“The main adjustment has just been having to sit down and help them with their work,” he said. “I’ve had to spend the most time with my youngest because he has a hard time understanding multiple pages of work.”

He said a normal routine consists of waking his children up around 9 a.m. and beginning e-learning shortly after breakfast until their work is completed.

Although he said he believes closing school was the right decision, he said he isn’t sure if e-learning will be enough to prepare his kids for the next grade level.

“I’m not sure this e-learning will be enough and I worry my kids are going to be behind when school picks back up,” he said.