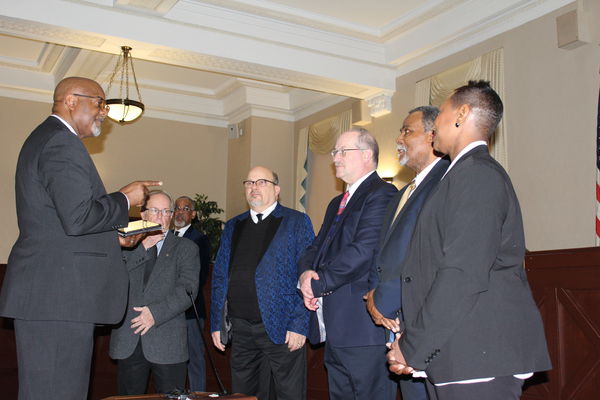 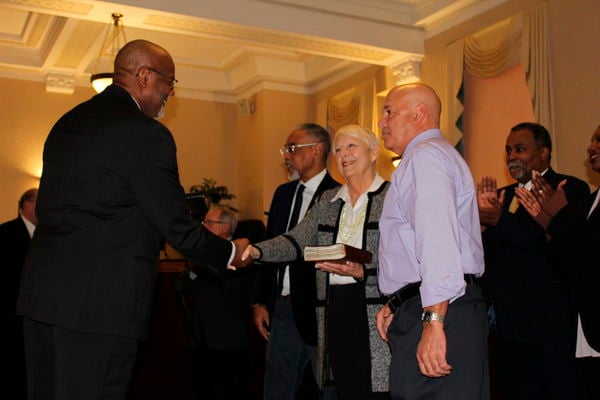 ELKHART — After taking the oath of office himself Saturday, new Elkhart Mayor Rod Roberson conducted a swearing in ceremony for the city’s other elected officials.

Roberson, a Democrat who captured more than 56 percent of the vote in November, presided over the ceremony for 10 other elected and re-elected leaders in City Hall Wednesday.

He recognized past officials as well as the family, campaign volunteers and other supporters who packed the council chambers to watch the moment.

“I’m just humbled and grateful for the support I received, thank you,” Barrett remarked. “And I’m going to work hard coming right out of the gate.”

The three at-large city council members who were sworn in were Arvis Dawson, Mary Olson and Kevin Bullard.

Roberson thanked Grodnik for taking a red-eye flight home from Seattle in order to administer the oath of office to him Saturday. He said it was an act of service that should set the tone for the new administration.

“I am absolutely honored to be able to, for the first time, swear anyone in,” he said. “So this whole event started with an act of humbleness and an act of giving, and it should end that way. We will begin this council and this administration in a manner that will be cooperative and in accordance to one another. The civility that we’ve shown in these proceedings will continue throughout this term.”

I believe Mayor Roberson deserves a fair chance at his vision of Elkhart! But to be sure I will be vigilant! I still believe the City's involvement in real estate is questionable. Access the website Elevate and you can see the huge amount of property in the downtown area that is owned by the city. None of which is contributing tax dollars!

Actually, voter turnout was 35.74% for Elkhart County, according to the County Clerk's Office. The number you gave is incorrect.

Actually I believe Max's post was sarcastic! Also Rasmus your statement, as you posted was a county wide percentage. Not Elkhart City? And that 35.74% is of eligible voters. not population! And people living outside Elkhart, Goshen, Nappanee, Middlebury, Waky, Bristol and Millersburg had no election to vote in!

You are correct that the number I posted is countywide. I am not sure how many voters were actually registered within the City of Elkhart, but here are the numbers that show that the 10% claim is false:

6,372 people voted in the Elkhart mayoral election. According to the U.S. Census Bureau, 52,000 people lived within the city in 2019. That means that about 12% of the entire population, including children and others not registered to vote, voted. So by that alone, the 10% of registered voters claim is wrong.

I want to be clear that I am not posting this to discuss how much of a mandate the mayor has - I am only doing it because the first comment made a false statement.