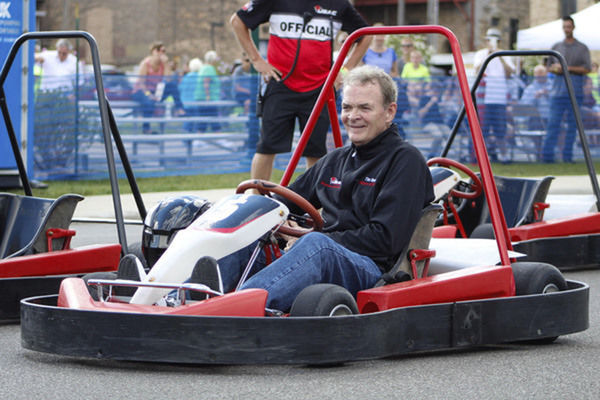 Mayor Tim Neese takes part in a go-kart race during the 2017 Thor Industries Elkhart Riverwalk Grand Prix that he restarted. 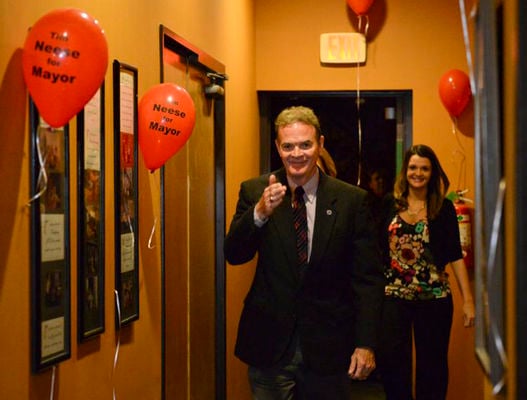 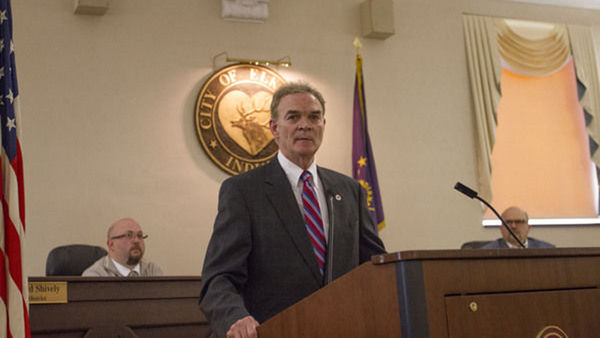 Truth file photo Mayor Tim Neese speaks in the Elkhart Common Council Chambers in 2017. Neese and the City Council had a contentious relationship despite hopes in 2015 that Neese’s election would mean a better mayor-council bond than under the Dick Moore administration. 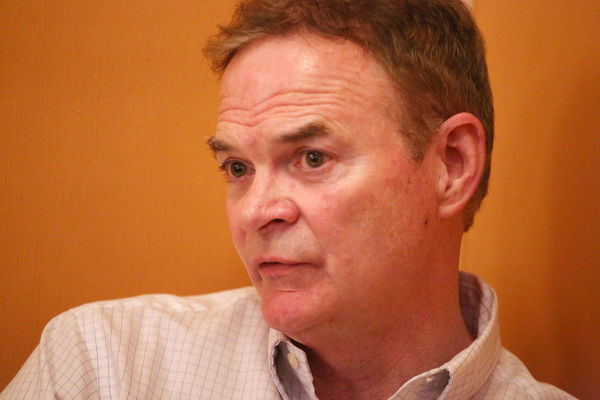 Truth file photo Tim Neese ran for Elkhart mayor and in 2015. He has served more than 30 years in public office, as his career also took him to the Indiana Statehouse and the Elkhart City Council. He has never lost an election.

Mayor Tim Neese takes part in a go-kart race during the 2017 Thor Industries Elkhart Riverwalk Grand Prix that he restarted.

Truth file photo Mayor Tim Neese speaks in the Elkhart Common Council Chambers in 2017. Neese and the City Council had a contentious relationship despite hopes in 2015 that Neese’s election would mean a better mayor-council bond than under the Dick Moore administration.

Truth file photo Tim Neese ran for Elkhart mayor and in 2015. He has served more than 30 years in public office, as his career also took him to the Indiana Statehouse and the Elkhart City Council. He has never lost an election.

ELKHART — Mayor Tim Neese is wearing jeans and an untucked shirt. It’s an unusual look for him, at least when he is in his corner office at Elkhart City Hall. But then again, that office doesn’t look itself either.

Walls used to be filled with pictures, like the one signed by “Big Bang Theory” actor Kevin Sussman. Tabletops and shelves were filled with memorabilia that, among other things, sent a message that Neese likes basketball. There was a home-like quality.

But now, on Dec. 31, it’s down to one picture of Elkhart’s first mayor, Henry C. Wright, a small bookcase that serves as Neese’s last desk, a phone, a computer on the floor, two trash containers, two small tables and two chairs. During the interview, a man walks in and takes away Neese’s chair mat.

Yet, there’s still work to do. The interview is delayed a few minutes as city attorney Randall Arndt stops by with a document that needs signing. Neese, whose chief of staff has promised that the administration would keep working even on the last day, doesn’t want to sign just anything, so he starts asking questions. He wants to know what one of his last acts as mayor will do.

He feels fine about it all, he says when the interview begins, and quickly turns to talking about his decision not to run for re-election. He made the decision a year ago, as he and the Elkhart Police Department faced national media attention after a video showed two officers beating a handcuffed suspect at the police station.

Back then, he didn’t say the police scandal had anything to do with the decision.

“The titles of dad and grandpa are more important than the title of mayor,” he said back then, pointing to family as the reason for stepping out of politics. But now, he admits a few other issues influenced his decision.

“Some council members were very difficult to work with,” he says.

He is frustrated that City Council defunded two of his staffers in 2018. The same year, they also defunded two code enforcement positions, despite Neese’s protests.

But members of City Council have said Neese shares in the blame. He has not been accessible, some say. A resident who has gotten the council’s sympathy accused Neese of bullying her at a town hall event in the spring of 2019.

When Neese announced that he would not run, Dickerson said the mayor had good intentions, but “I am also very, very thankful that he recognizes when it’s time to focus on family and what’s important at home, and I fully respect that decision.”

Councilman Brian Thomas, R-2, said he was surprised when Neese decided one term would be enough.

“I think most people think he’s done a good enough job that it would have warranted another term,” he said.

But Neese’s last year was one that may well be remembered for the police scandal that broke in late 2018. Time and time again, the mayor tried to convince residents he could fix the Police Department, as several officers were looked at with critical eyes for mishaps and criminal acts both on and off duty. A nine-month-long review of the department concluded in December and suggested roughly 90 policy recommendations to deal with issues such as use of force and racism. It all started with the video of the two officers punching the suspect to the ground, and eventually, that played into the mayor’s choice not to seek another term.

“That was part of the decision, yes,” Neese says now.

He says he did not know about the issues within the police department until the video became public and he learned that then-Chief Ed Windbigler, whom Neese appointed, had described the incident as his officers “going a little overboard.” Neese asked Windbigler to resign as a consequence of his downplaying the seriousness of what had happened.

Before the video came out, Neese had taken steps to improve civilian oversight of the police. He created merit commissions for both the police and fire departments, appointing civilians to hear from the chiefs whenever there are disciplinary issues. However, the commissions have little power, as they cannot change the disciplinary action unless the chief determines an issue to reach a certain level of severity. That rarely happens, and meetings are usually short.

How the city changed

Though he says he is not interested in legacies, Neese acknowledges that the issues with the police will be part of his. But he says the city also changed for the better in his four years, which have brought a historic amount of investment in the city, and especially in the River District.

That year, permits for about $140 million of construction were approved, according to the mayor.

And, in his own words, the face of the downtown has changed during his term. It now consists of the new Elkhart Health & Aquatics Center, which opened in 2019; Hotel Elkhart, which will reopen in 2020; and the Lerner Theatre, which reopened in 2011, Neese says.

“I think we’ve seen a resurgence or a renewal of pride in downtown Elkhart,” he says.

Neese has championed the River District Revitalization Project, of which the aquatics center is a cornerstone. Public investment of about $30 million is expected to draw $250 million to $300 million in private investment in projects such as the Stonewater apartment complex, a new Martin’s Super Market and new retail space – with more to come. Under Neese’s leadership, the city has narrowed Jackson Street and made improvements to sidewalks throughout the district in an attempted to make an urban and walkable environment rather than a section of town people drive through.

But the project has not come without criticism. Many residents feel that Neese has put too little focus on lower-income housing, for which there are no plans in the River District. But Neese thinks the criticism is unfair.

“Most developers don’t set out to build low-income housing, because they want to make a profit. And there’s nothing wrong with making a profit,” he said.

If more low-income housing is to be made available, it has to come through different means, he says. In 2015, Neese ran in part on a promise to improve the city’s code enforcement and restore blighted areas. That is how to do it, he says.

But code enforcement has been one of the areas most criticized during Neese’s term. Residents and landlords showed up to several City Council meetings in 2018, complaining that code enforcement seemed arbitrary and telling stories of code enforcement officers not always following the rules and having issues with listening to appeals. That was what led to the City Council defunding two positions in the department.

Yet, Neese says there have been improvements, which building commissioner Jim Holtz has also been arguing this year. He said the department is taking a friendlier approach.

As a candidate, Neese also said he would tackle the issue of vacant buildings downtown. But that issue remains, with the former Chase building on Franklin Street and the five-story section of the Elkhart Truth building on Second Street being prime examples of empty offices.

Neese says he would like to see every building occupied but added that a mayor has only so much power, which includes making sure the buildings are up to code.

“But I think that there is a responsibility by the businesses or the individuals that own buildings to maintain them as well,” he said. “But yeah, if there is one vacant building anywhere in the City of Elkhart, then certainly that’s one too many.”

An accomplishment that Neese likes to put in the spotlight is his ability to bring events downtown. He says the number of such events have grown from five to more than 60 per year. Examples include when he brought back the go-kart grand prix after a two-decade hiatus and closed off multiple blocks when the Hall of Heroes Comic Con expanded from being inside The Lerner Theatre to taking up Central Park and portions of Main Street as well. That was when he got the photo from “Big Bang” actor Sussman.

And more events may come as a result of Neese’s efforts. He and former Fire Chief Chad Carey have lobbied to be the host city of the national 3M Scott Firefighter Combat Challenge.

“Normally it goes to cities larger than Elkhart, but one of the planners advised me that the lay of the land would accommodate a national competition,” he said.

All it would require, he says, is to increase seating at the same spot that normally hosts the local firefighter challenge, at High Street and Waterfall Drive by Central Park.

Neese, leaning back in his office chair in the middle of the empty floor, says his own future is still undecided.

“I have some employment possibilities, but nothing definitive at this point,” the 64-year-old says. “I would like to work a few more years.”

As he speaks, he has about 25 hours left of his current job. At noon Wednesday, Jan. 1, Rod Roberson is scheduled to be sworn in as Elkhart’s new mayor. He and Neese have met a few times during the transition.

The advice Neese passes on?

“Listen to people, educate yourself and then make a decision. Don’t be a micro-manager, but be hands-on,” Neese says.

The best part of the job, according to the mayor who knows what it’s like to be a member of City Council and the Indiana General Assembly, is that it comes with the ability to fix problems right away.