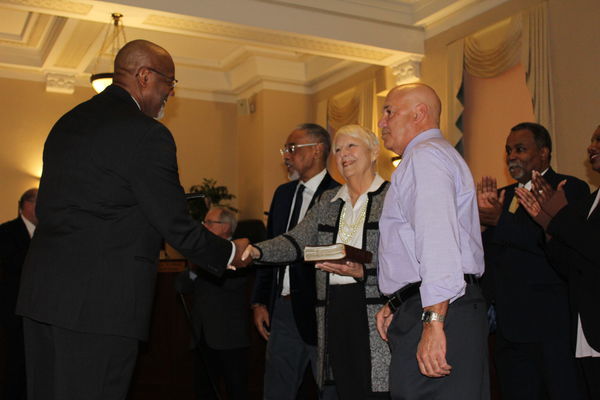 ELKHART— Mary Olson, the city of Elkhart’s longest-serving councilmember, died Monday after a battle with pneumonia, according to friends. She was 74.

Olson, a Republican, served on the city council for nearly 30 years. She was first appointed in 1993 to fill the term of the late Charles Darling, an at-large seat she has held for seven terms, often leading the ticket as the highest vote-getter.

She leaves behind her husband, Dave, and three daughters.

Friends and colleagues of Olson describe her as a power of attorney for the people who was strongly devoted to finding solutions to issues in her community.

“Mary was a big believer in accountability and making sure that actions were genuine, and she stood up for her principles very strongly,” said Carol McDowell-Loshbough, one of Olson’s closest friends.

McDowell-Loshbough has known Olson for 41 years and served on the city council with her for six years. She said Olson was an advocate for her constituents and was never afraid to take the hardest cases and try to turn them around.

One issue McDowell-Loshbough and other friends recalled was a time when the sewer lines failed in a neighborhood along the lower St. Joseph River, and Olson stepped in to push the city to take action and was a champion of that call.

“She took a bottle of water and sat it on (then-Mayor Jim Perron’s) desk and showed how dirty and tainted the water was and got public services all the way through Greenleaf Manor,” McDowell-Loshbough said.

Raised in Minneapolis, Minnesota, Olson lived in Elkhart for more than 40 years. She worked for former U.S. Congressman Jon Hiler and served as president of the Indiana Association of Cities and Town.

Former Elkhart Mayor Tim Neese said Olson was a solid thinker who was always willing to cross party lines regardless of the issue.

“Mary was always very even-tempered,” he said. “She was an individual during my time as mayor that I’d speak with about various types of ordinances and worked very well with her … and knew I would when I was in the mayor’s office.

Other friends and colleagues say that Olson was willing to work with anyone.

Councilman David Henke, R-3, met Olson when he was first elected to council in 1999. He said Olson always made herself available to talk about issues happening throughout the city, he said, benefiting from strong connections she had with her constituents.

“She knew the back story to a lot of things that new people would not have known,” Henke said. “And when people from years ago would have issues, Mary is who they’d call because they remembered the relationship.”

Henke said he maintained a close relationship with Olson. The two talked at least twice a week about any topic. “Although we didn’t always agree, we respected each other’s differences,” he said.

But even though Olson was elected as a Republican, she didn’t wear that as her identity, Henke said. Elkhart Mayor Rod Roberson, a Democrat, agreed with that sentiment, noting that Olson supported him when he ran for mayor in 2019.

“She stood up for nonpartisanship. She wasn’t a partisan person, and that’s something I stand for as well; so we are very like-minded,” he said.

Roberson has known Olson for 20-plus years. He was elected for an at-large seat on the city council in 1999 and served four terms with her.

“Mary was a consummate servant; she really wanted to serve the community as a whole,” he said. “When she had an issue that she felt was for the good of the people, she stood on it and would ensure that everyone, from the mayor to everyone on the council, was well aware of where she stood on an issue.”

But Olson didn’t let disagreements prevent her from working with people on issues.

“When she disagreed with me, she was very well-spoken about her disagreement and was never disagreeable,” Roberson said. “And that to me shows a person that can hold their position and let you know exactly where they stand if they disagree.”

Elkhart City Judge Charles Grodnik met Olson over 40 years ago and said their daughters grew up together.

But it wasn’t until they both started working for the city when they realized they had an even closer connection.

“I was sitting in my office at the City Hall and I had a drawing of my high school that I got from my 30th reunion, and Mary comes in and looks around and asks, “Why is my high school on your wall?” Unbeknownst to both of us, we went to the same high school – Washburn High School in Minneapolis. I graduated three years ahead of her.”

He said her passing is a great loss to Elkhart.

“She was a seasoned legislator and never felt it was necessary to take an extreme position although she was ready to say no when something wasn’t appropriate.”

Aside from being a seasoned public servant, friends said Olson will be best remembered for being caring.

“Some people would call that a bleeding heart, but I’d call it a caring heart,” McDowell-Loshbough said. “She was always there to help. And for her friends, she always held us accountable. She’d support us, but also challenge us to do the right thing – to be strong and carry life forward.”

Mrs. Olsen was an amazing woman, and a great role model. I am so sad to hear of her passing, but I am glad I had the opportunity to know her.