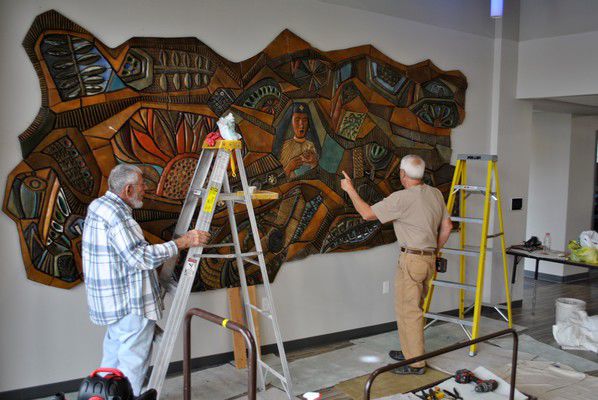 Wayne Harshberger, left, and Bruce Gowdy put finishing touches on one-fourth of a historic pharmaceutical mural at the ETHOS Science Center on Friday. 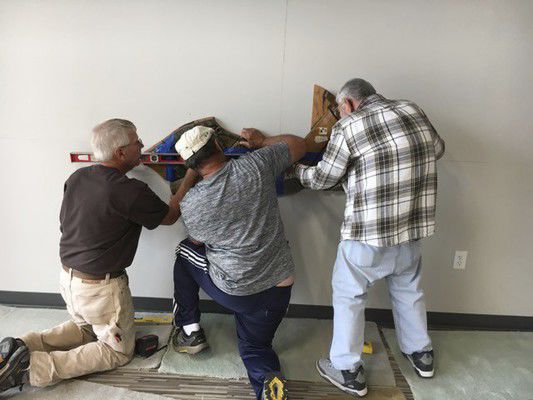 Crews in the beginning stages place the mural on the wall at the ETHOS Science Center. 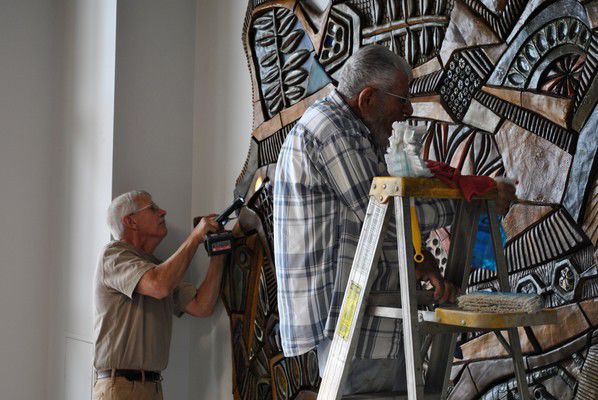 Wayne Harshberger, right, and Bruce Gowdy put the finishing touches on one-fourth of a historic pharmaceutical mural at the ETHOS Innovation Center on Friday.

Wayne Harshberger, left, and Bruce Gowdy put finishing touches on one-fourth of a historic pharmaceutical mural at the ETHOS Science Center on Friday.

Crews in the beginning stages place the mural on the wall at the ETHOS Science Center.

Wayne Harshberger, right, and Bruce Gowdy put the finishing touches on one-fourth of a historic pharmaceutical mural at the ETHOS Innovation Center on Friday.

ELKHART — A piece of Elkhart’s pharmaceutical history has a new home.

Nearly 40 pieces of a mural from the former Miles Laboratories are on a wall near the entrance of the ETHOS Innovation Center.

The stoneware mural was designed at the suggestion of Walter Beardsley, chairman of the board of Miles Laboratories, in 1965 by Raul Angulo Coronel, a Southern California artist.

It’s made of 4,000 hand-formed pieces of high-fired, glazed clay. It was shipped to Elkhart from California and originally mounted in the Miles cafeteria in 1966, which later became Bayer.

The mural was rescued in 2011 when the building was demolished.

The mural was broken into four sections. Two sections were installed at the Lerner Theatre and a third at the ETHOS Innovation Center. The fourth piece is still awaiting a location.

Work started Tuesday on attaching the mural piece depicting the history of medicine to the ETHOS Innovation Center on Elkhart’s north side. The mural is like a giant jigsaw puzzle and weighs in at over 2 tons.

The installation at ETHOS was overseen by Goshen stonemason Wayne Harshberger, who has had experience working with the mural before its installation at the Lerner. He took apart the piece at Miles.

Harshberger said the project is a challenge, but one he is proud of since it’s preserving local history.

“I have to pinch myself sometimes to make sure this isn’t a dream,” Harshberger said about the installation process. “This mural is a great piece of art and the history behind it is astounding – it takes us into the early process of making medicine.”

Bayer Corp. sold the building to ETHOS in 2016 for $1. ETHOS Innovation Center helps children and adults engage with science and technology through hands-on programs.

The center provides opportunities to connect science to everyday life through problem-solving, discovery and critical thinking. It also provides classroom teachers and their students with benchmarks set by national standardized tests, according to its website.

John Taylor, CEO of the innovation center, said when the ETHOS building was renovated into its new center, where the former Bayer office complex was located, the wall was reinforced to prepare for the mural’s installation. He said he’s happy to bring back a piece of history to a site connected to where it was once originated.

“While most of the Bayer plants are gone, including the plant that the mural was in originally, we’re still in one of the buildings that still stands,” he said. “And with Elkhart, there are so many people that were involved working at Bayer and I see it as a tribute to them. It’s on the same overall property of the original site and it’s a piece of Elkhart that people should hold on to. It’s amazing to look at and now as we have children come in here, their parents and different adults and programming, we’ll get to enjoy that.”

The piece is almost complete. On Friday, Harshberger and Bruce Gowdy, who also did the mural’s renovation in the 1980s, were cleaning and putting the finishing pieces on the structure.