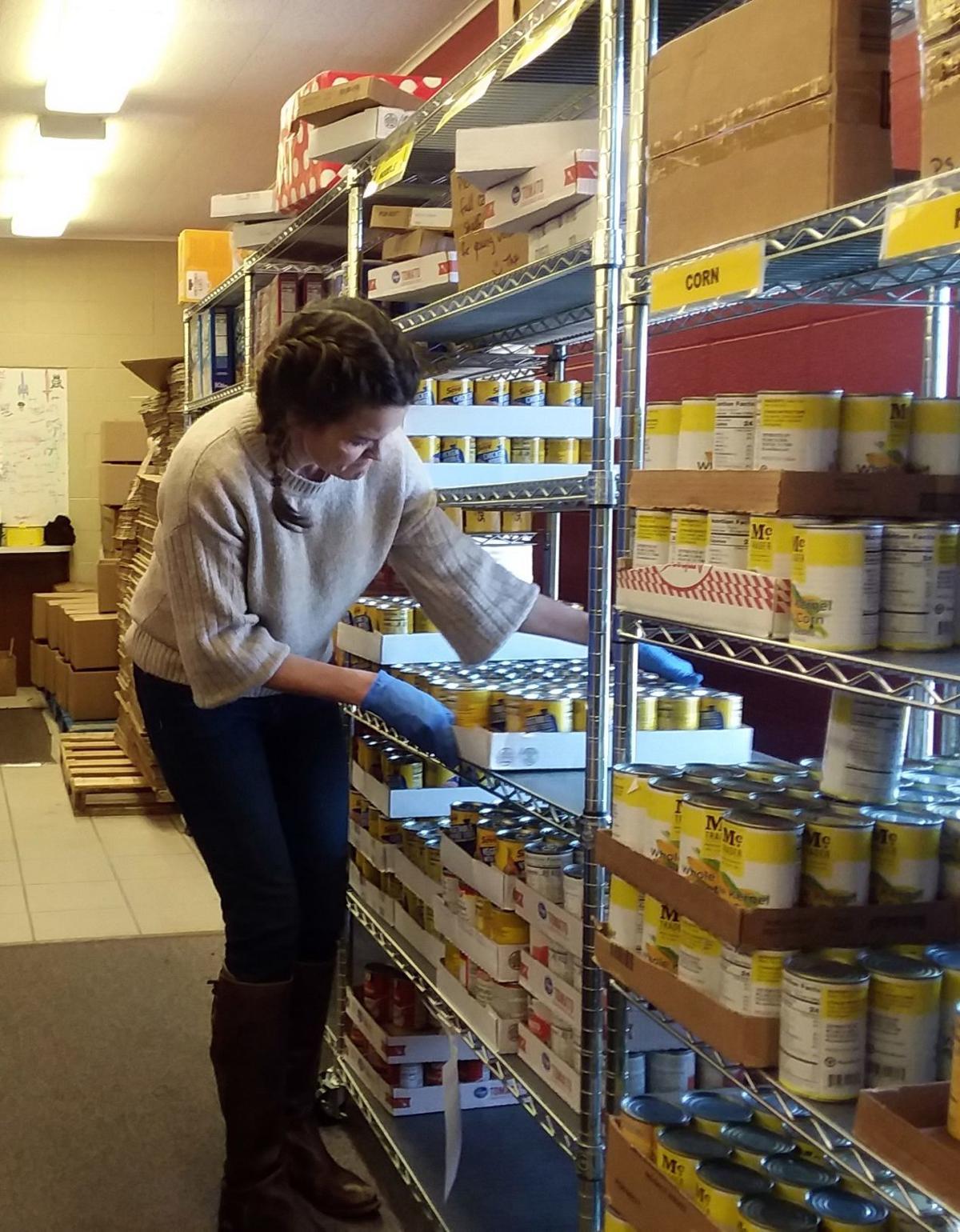 Melissa Lucas, of Bristol, sorts through food at the Middlebury Food Pantry. 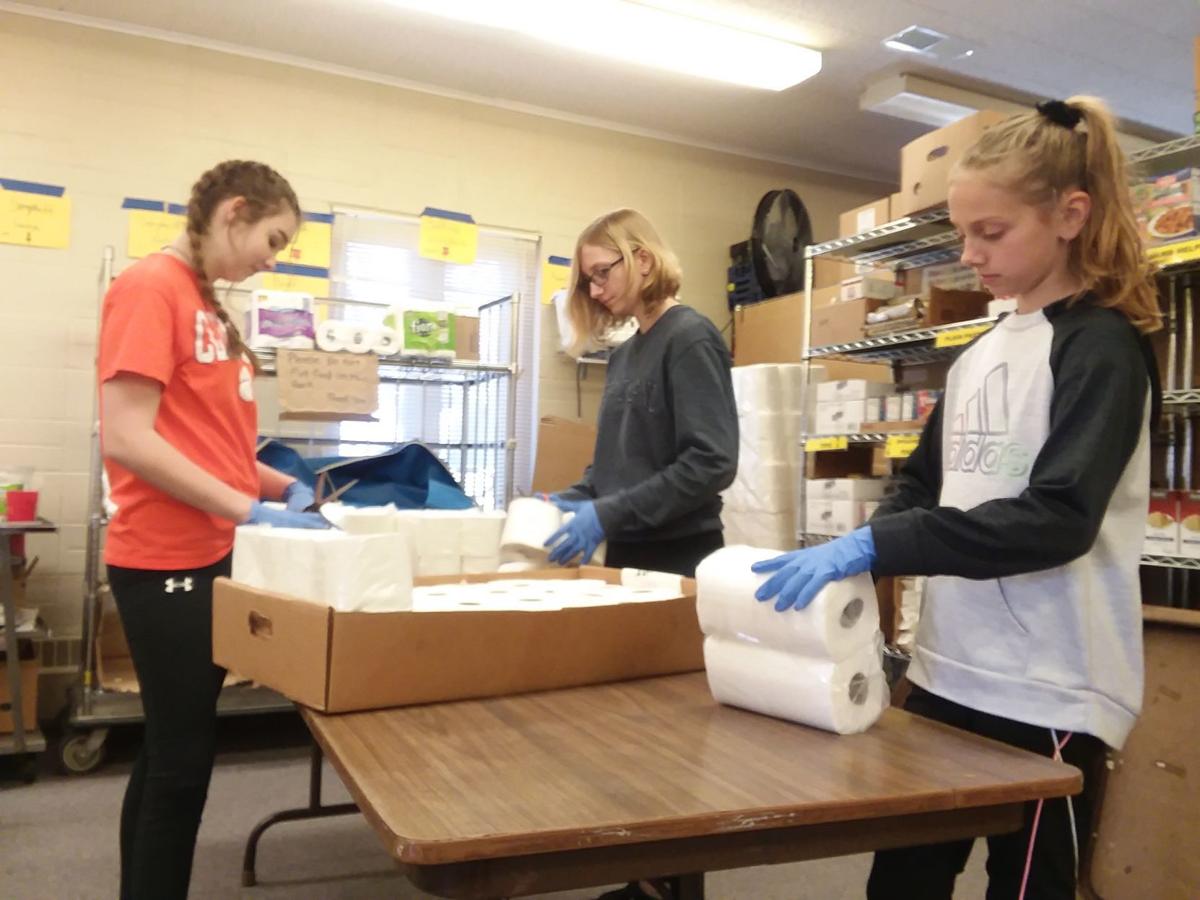 Devon Lucas, 14, of Bristol, and Cassidy, 14 and Miyah Miller, 11, both of Goshen, prepare toilet paper to go into bags to be distributed at the Middlebury Food Pantry.

Melissa Lucas, of Bristol, sorts through food at the Middlebury Food Pantry.

Devon Lucas, 14, of Bristol, and Cassidy, 14 and Miyah Miller, 11, both of Goshen, prepare toilet paper to go into bags to be distributed at the Middlebury Food Pantry.

ELKHART — In the wake of a state request to remain open at all costs, Elkhart-area food pantries are preparing to nearly double the number of attendees in the coming weeks.

In the past week, Church Community Services’ food pantry has seen a 56 percent spike in the number of families waiting for food, as more families are left without a paycheck during the coronavirus outbreak.

Food panties around the county have instituted protocol changes to encourage social distancing, asking guests to wait outside the doors, 6 feet apart, as volunteers wearing gloves and face masks bring food out to them.

At Susanna’s Kitchen, an Elkhart-based soup kitchen, protocols have changed, too. Kitchen manager Judie Hyatte-Howie said the salad and PB&J bar are both closed down, and volunteers are packaging those items for their patrons. Tables have been pulled apart and the seating capacity decreased from 90 to 52, although patrons can still wait outside until there is an open table.

“If they’re waiting, we will always serve them,” Hyatte-Howie said. “We’ll just do it a little differently. If we have to stay open a little longer, we will.”

Hyatte-Howie said fewer people have been attending the daily lunches, perhaps because of concerns about the coronavirus. They’ll remain open as long as the USDA is providing commodities. At the local food pantries, though, more traffic is expected.

“With people finding out they won’t be working, they’re very frightened,” Middlebury Food Pantry director Pam Bingaman said. “We will share whatever we’re able to get. That’s always been our policy. We’re a little different in Middlebury, where we try to give a week’s worth of food as opposed to just two or three days, and that’s something that might have to change in the coming weeks.”

With increased traffic and limited supplies, both Middlebury Food Pantry and Church Community Services are considering lessening rations so they can feed more people. They’re expected to see double the number of hungry in the next two weeks.

“We’re already talking about how we’re going to have to reduce the amount of food each family gets,” said Tom McArthur, executive director for Church Community Services. “It’s counterproductive and counterintuitive, but you have to share. We have to make the food go around.”

The good news, if there is any, McArthur said, is that The Food Bank of Northern Indiana seems to have enough food for restock, but many food pantries are in need now thanks to the increase in traffic.

“Right now we’re feeding 10 percent of Elkhart city’s population,” McArthur said. “Within a couple weeks we expect it to be as much as 20 percent. There’s a lot of high anxiety around here, and I don’t know if we can handle double the traffic in the next two weeks, but we’re going to do everything we can.”

For Bingaman and the Middlebury Food Pantry, though, the outpouring of support is worth noting.

“My phone is ringing all the time, and half the time it’s people seeing how they can help,” she said.

Although many volunteers, who tend to be seniors or high-risk individuals, are being encouraged to stay home and protect themselves, people wanting to help are calling pantries all over the county in an effort to see what they can do to lessen the burden on newly struggling families.

“What I’m finding more often than not, in the workforce, all I run into are grumpy people that are frustrated and frightened, but in the food pantry world, all I’m finding are generous people that want to do whatever they can to help.”

Some pantries are no longer accepting new volunteers or food donations. Instead, they’re asking for cash to help subsidize the needs of the public.

At Middlebury Food Pantry, which frequents Aldi, the same limitations that have been put on the general public have also been put onto organizers, so they can’t buy as much food at once as they need. Instead, they’re being asked to purchase gift cards to hand out for items they can’t gather at the pantry.

“So far we’ve been blessed to never run out of food,” Bingaman said. “The community is stepping up in a big way to provide help wherever it’s needed. My time right now is spent trying to organize that help.”