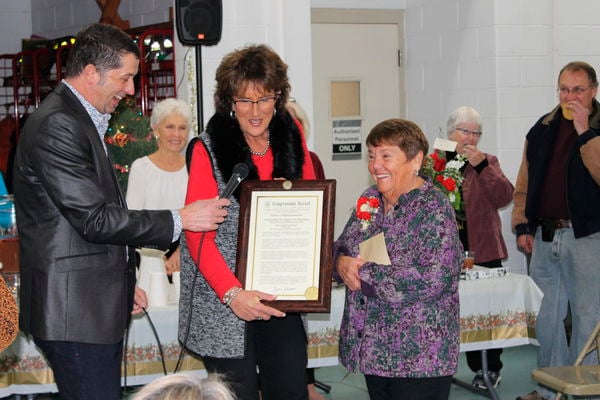 U.S. Rep. Jackie Walorski, R-Jimtown, presents Bristol Clerk-Treasurer Mary Ryman with the Congressional Record during her retirement party on Saturday. Ryman, who’s been the town clerk-treasurer for 46 years, was also awarded the Sagamore of the Wabash. 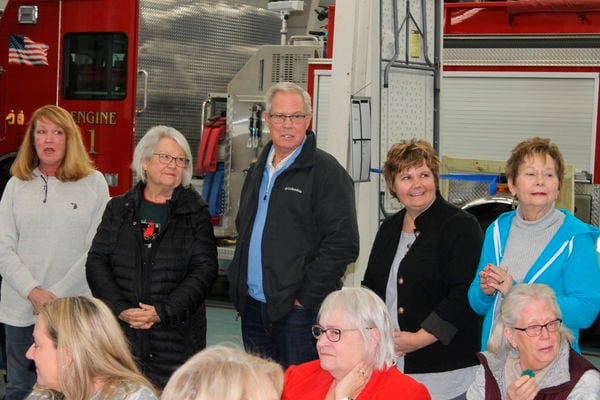 Family, friends, and colleagues of Bristol clerk-treasurer Mary Ryman gather at the Bristol fire station for her retirement party on Saturday. 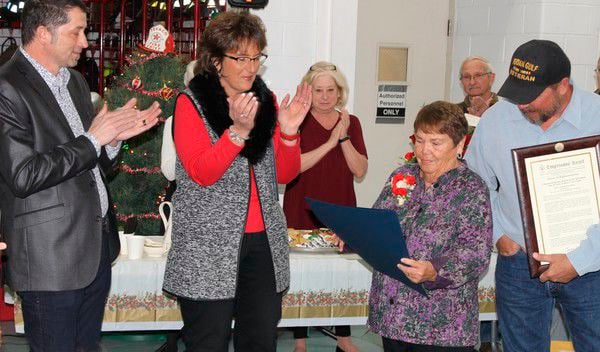 U.S. Rep. Jackie Walorski, R-Jimtown, presents Bristol Clerk-Treasurer Mary Ryman with the Congressional Record during her retirement party on Saturday. Ryman, who’s been the town clerk-treasurer for 46 years, was also awarded the Sagamore of the Wabash.

Family, friends, and colleagues of Bristol clerk-treasurer Mary Ryman gather at the Bristol fire station for her retirement party on Saturday.

BRISTOL — Mary Ryman, 76, walked into the Bristol fire station Saturday expecting a small gathering for her retirement party as she prepares to end her 46-year tenure as Bristol’s clerk-treasurer at the end of this year.

She was right to some extent, but there was more.

The reception was well-attended by dozens of Ryman’s family, friends and fellow servants who warmly greeted her with hugs and well wishes.

Ryman, a Republican, has been the town’s clerk-treasurer since 1973 when she was appointed between election years and has since served 11 terms.

She will be succeeded by Cathy Antonelli, a Democrat, who won the November election for the post.

During the reception, former and current colleagues shared reflections of her. Among those was Jeff Beachy, current town council president, who said Ryman’s encouragement was his primary reason for running for council.

“Me and my wife moved to Bristol about seven years ago, and about a year or so later, there was a referendum on the ballot to add a fifth seat to the council, which we did,” he told the crowd. “My aspirations as a young boy growing up was to never become a politician, and when that referendum passed, Mary called me the next day and encouraged me to run. She thought I’d be good, and I listened.”

As an elected official and community member, Beachy said one of his top goals is to make sure he provides as much service to Bristol as Mary did.

“Your guidance since I’ve been on the council has been wonderful,” he told Ryman. “You’ve taught me a lot and I always think about how can I do a good job and serve like Mary.”

Visibly emotional, Ryman thanked everyone for coming and played a part in her long-standing career.

But little did she know, this was only the beginning of her celebration.

She was surprised shortly thereafter by U.S. Rep. Jackie Walorski, R-Jimtown, who informed the crowd that Ryman is currently the longest-serving town clerk in Indiana before presenting her with two state awards.

Walorski first presented Ryman with the Congressional Record. The Record signifies Walorski’s acknowledgment of Ryman’s accomplishments in the United States Congressional Journal, written and spoken before Speaker of the House, Nancy Pelosi.

“Mary’s unparalleled commitment to her community exemplifies what it means to be a Hoosier and a public servant,” Walorski read. “Her unmistakable passion for making Bristol a better place inspires all who know her. With her retirement, she leaves behind a legacy full of accomplishments, but her impact on the community is sure to last far into the future.”

Then Walorski presented Ryman with an award deemed as the highest honor Indiana’s governor can bestow – The Sagamore of the Wabash.

The honor is given to those who have rendered distinguished service and whose leadership has contributed in a significant way to making Indiana a better place in which to live, work and raise a family.

“Mary you’ve made it perfectly clear that you’re full of wisdom, advice and all the kindness in the world,” Walorski said. “Thank you for dedicating your life to making our community a better place. It’s an honor to present the Sagamore of the Wabash to you on behalf of Gov. Eric Holcomb.”

Feeling surprised was an understatement, Ryman said after she accepted her awards.

“You feel humility because they make it sound so important, but I was just doing my job,” she said. “These awards just make me feel very warm inside to know that people recognized and appreciated my work.”

Asked what she’ll miss most about the job, Ryman quickly responded, “The people.”

“When my kids were younger, they’d say, ‘Mom, is there anyone you don’t know in this town,’” she said, laughing. “We knew everyone then. People come in and pay their water bills and buy cemetery lots and you build relationships with them whether you’ve known them for many years or just a few months – it’s just wonderful.”

As for her next step, Ryman said she doesn’t have a clue, but she’ll remain in Bristol. Her sister, Sally Fuller, added that she and Ryman don’t take the word “retirement” well.

“We call it ‘transitioning,’ so if anyone else is hiring, Mary’s available,” Fuller said, laughing.