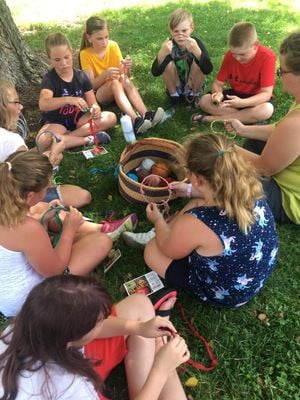 Youngsters in the Summer Fun kids camp work on the community weaving project in Middlebury. 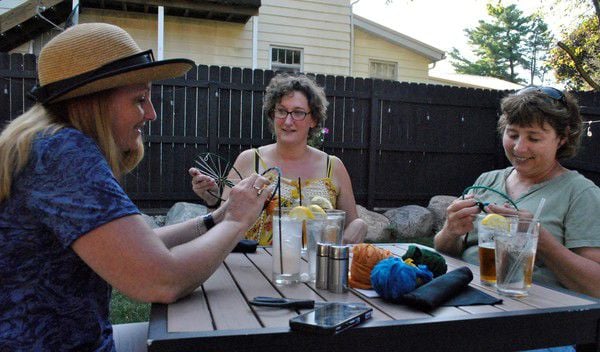 Kris Mueller, Desiree Beauchamp-Boucher and Monica Yoder work together on the community weaving project at West on Warren. 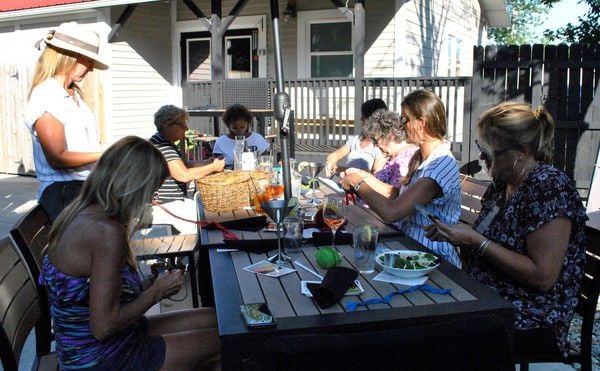 Members of the community gather to work on the Middlebury weaving project at West on Warren.

Youngsters in the Summer Fun kids camp work on the community weaving project in Middlebury.

Kris Mueller, Desiree Beauchamp-Boucher and Monica Yoder work together on the community weaving project at West on Warren.

Members of the community gather to work on the Middlebury weaving project at West on Warren.

MIDDLEBURY — Residents are rallying around a weaving project meant to beautify a local restaurant but one that is also crafting community.

“It’s way more than I thought it was going to be,” participant Kris Mueller said. “It’ll be interesting to see how everything comes together and how it will work.”

Carrie Beachey, leader of the Middlebury Arts Council, said she was approached about a few years ago by West on Warren Gallery and Grill about designing a fiber arts installation in the bar section.

“With that space in mind, I came up with the idea to do all these different-sized weavings in different colors,” she said.

The project is one of the first for the Middlebury Arts Council, which began in September 2018. This year has primarily been spent figuring out the hierarchy and the goals of the newly organized group, but Beachey said one of the council’s goals is to get the community involved in artistry around town.

Beachey herself specializes in public art. She’s already produced two Little Big Idea Grant projects this year. The first was the Fiber Art in Art Alley. In September, she and her husband, Phillip,  created a community engagement project in downtown Goshen in the 100 block of South Main Street in which local artists and experimenters were encouraged to work with them to weave together natural materials on wire fencing.

Little Big Idea Grants, awarded by Vibrant Communities Elkhart County, range from $250 to $1,000. The grants a re meant to encourage creative, fun and engaging projects in communities across the county.

Now producing her third project, using a Little Big Idea Grant received in May, Beachey is ready to produce a work in her hometown.

“I think it’s a lot of fun doing these projects,” Mueller said of the community weaving activity. She met with her friend Monica Yoder at West on Warren recently to join with almost 20 Middlebury residents curious about the project.

Beachey makes various sizes of circular weaving looms and brings them to public places, such as West on Warren, where interested residents are taught to weave and are encouraged to pick up a loom and try their hand at it. Weavers can start a new one or finish one someone else has already started, which lends to the diversity of the project.

Public weaving sessions are free to the public, all materials are provided, and all ages are welcome to attend. No registration is necessary.

Beachey and the Community Collaborative Weaving project can be found from 6 to 8 p.m. Tuesdays in August at West on Warren’s patio, with rain location at the Middlebury Chamber of Commerce, and from 6 to 9 p.m. Wednesday, Aug. 12, at the Spruce House. The Wednesday session also serves as a Middlebury Arts Council chat, offering residents the opportunity to come out and learn more about the council. There will also be a pot luck.

Anyone who attends three or more work days will have the opportunity to create a 4-inch weaving project of their own to take home. Participants are not required to purchase food or drink at West on Warren during these project times.