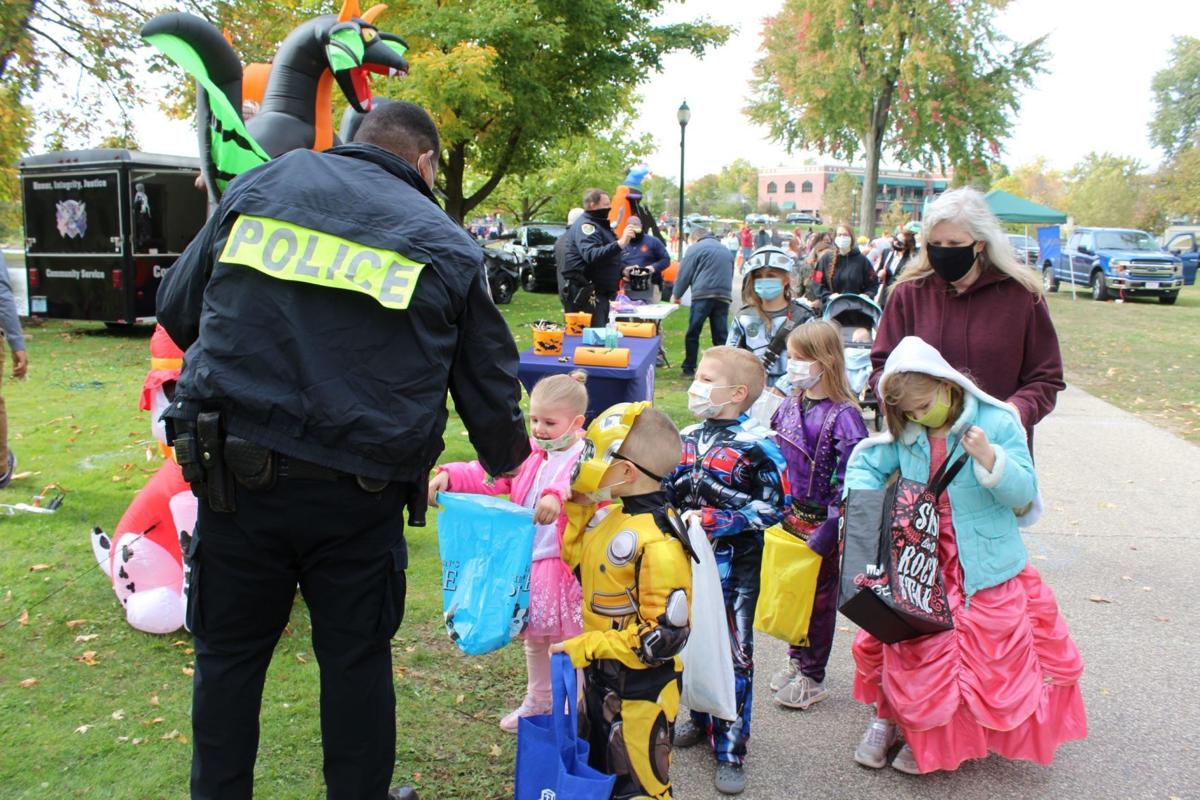 Elkhart Police Lt. Wayne Bias hands out candy to a group of trick-or-treaters Saturday at Island Park. Dozens of organizations participated in the annual event, which drew a long line of socially distanced groups of children and their parents. Everyone at the park was required to wear a non-costume mask and maintain distance from other groups. Mayor Rod Roberson on Wednesday said the community can still enjoy some activities, if done properly, while still protecting public safety.

Trunk or treat at Island Park 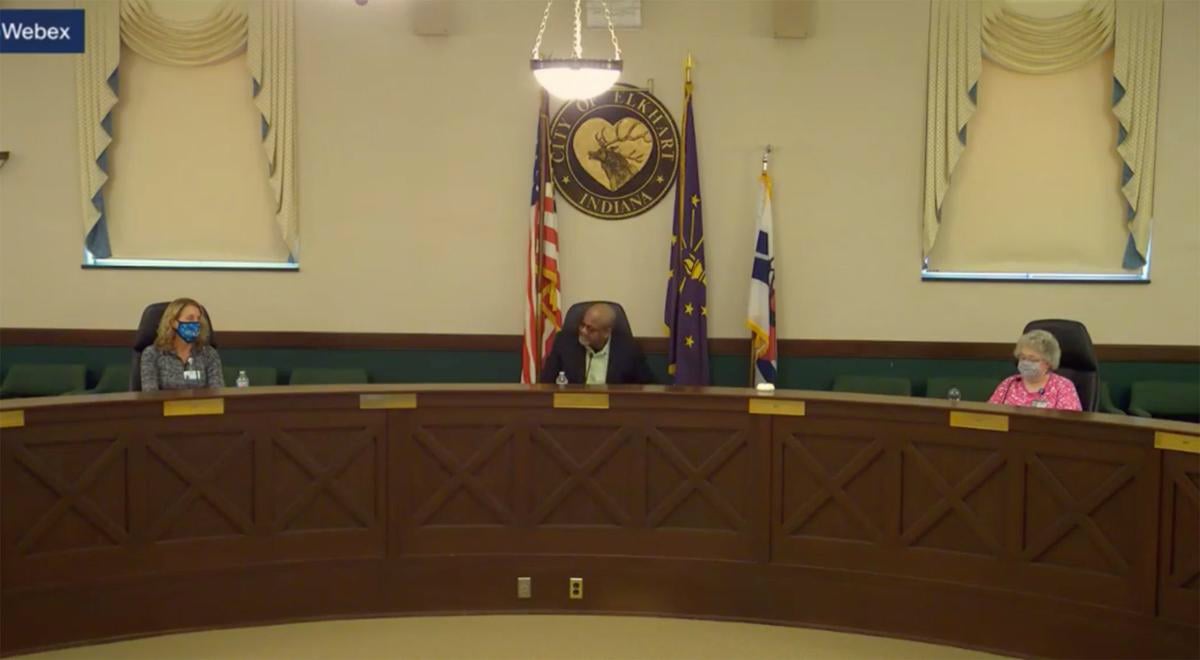 Elkhart Police Lt. Wayne Bias hands out candy to a group of trick-or-treaters Saturday at Island Park. Dozens of organizations participated in the annual event, which drew a long line of socially distanced groups of children and their parents. Everyone at the park was required to wear a non-costume mask and maintain distance from other groups. Mayor Rod Roberson on Wednesday said the community can still enjoy some activities, if done properly, while still protecting public safety.

Trunk or treat at Island Park

ELKHART — Two of Elkhart’s most prominent doctors joined Mayor Rod Roberson on Wednesday evening to get across to the public that Elkhart County is experiencing a serious public health crisis.

“We’re having to evaluate all of our procedures, all of our surgeries that might need an inpatient bed, we have to look at those very closely and we’re going to have to start postponing some of those,” Bache said.

The problem is not having enough beds, Bache said. The hospital does not have enough staff to handle a continued increase without cutting other procedures. Right now, Elkhart General has about 30 percent more patients than what is the normal capacity. And that’s not the end of the hospital’s problems.

“Our staff is getting sick,” Bache said. “The people who work at the hospital live in this community, and when you have a rate of infection as high as it is in our community, we start to see our people getting sick.”

She asked the public to consider that, while they may be healthy and not at risk even if infected with COVID-19, they could spread the virus to others who are not as fortunate.

“I feel like we have an obligation as a society to care about the health of the community at large, and to me, it’s a fairly selfish belief that, ‘Just because I might not get sick with this, it’s OK for me to do things’ that may increase the spread of this virus in the community and endanger lives of our neighbors,” Bache said.

Dr. Lydia Mertz, Elkhart County’s health officer, said the recent surge locally and statewide came after Gov. Eric Holcomb moved Indiana to the final stage of his Back on Track plan, for instance allowing restaurants and bars to operate at capacity, though still with social distancing. According to Mertz, many people misunderstood Holcomb’s decision and thought it meant that the state was now in the clear and people could go back to normal activity.

But in fact, Elkhart County and Indiana as a whole are experiencing the worst parts of the pandemic to date, and Mertz has said the county will reintroduce restrictions on things like large gatherings and restaurant capacity. The Elkhart County Health Department expects the county to move from orange to red in the state’s COVID-19 alert system next week. That would be the point when some restrictions would be reintroduced, Mertz said in an interview Thursday. She said she does not want to use that power but that it would be necessary.

“This is not something I want to go through over and over again. In July, we went through this and now we’re going through this,” she said. “I don’t want to do this every couple of months until next summer.”

That does not mean everything needs to be canceled this year. Roberson said the City of Elkhart recently held a successful “Trunk or Treat” event at Island Park. He had planned to cancel, but the city took extensive measures to ensure that participants social distanced and wore masks. The city cannot give tickets for not wearing masks, but it can tell people to leave the park, he said.

Mertz agreed with Roberson that such events can be done safely.

“That’s an example of how you can have something that’s normal or a yearly activity. You just have to do it differently than what you did last year. But people can still come and have terrific fun,” she said.

Events such as funerals and weddings can also be OK, Mertz said, but many families tend to think that as long as they cut attendance, people do not need to wear masks. That has caused many people to get infected, according to Mertz.

The doctors were asked at the town hall what advice they give to families as some major holidays are coming up. They agreed that very small gathering and wearing masks if different households come together is key.

This is something Bache’s own family has to deal with, she said, as they tend to have very big get-togethers where people travel to see each other.

“And we have just decided as a household that we’re not going to do that this year,” she said. “Grandma and grandpa are not coming, and aunts and uncles are not coming. And it’s hard, but it’s really just not a safe environment right now.”

Mertz said there is nothing wrong with wearing a mask around family. Doing so shows that you are willing to protect them, she said. Families might also want to turn to Zoom, Skype or FaceTime.

“You may be able to have a more normal Thanksgiving next year if you can keep everybody alive this year,” she said.

Some continue to doubt whether the coronavirus pandemic is real or as severe as it is portrayed. Roberson addressed that concern at the end of the hour-long town hall.

“Dr. Bache is real. She’s sitting beside me and she’s just told you that there aren’t any more beds at Elkhart, at Memorial. And in Bremen, there are some,” Roberson said. “You may not have the opportunity to get served if we don’t find a way to stem this.”

ELKHART — Elkhart County and the state both broke their one-day record for new COVID-19 cases Thursday.