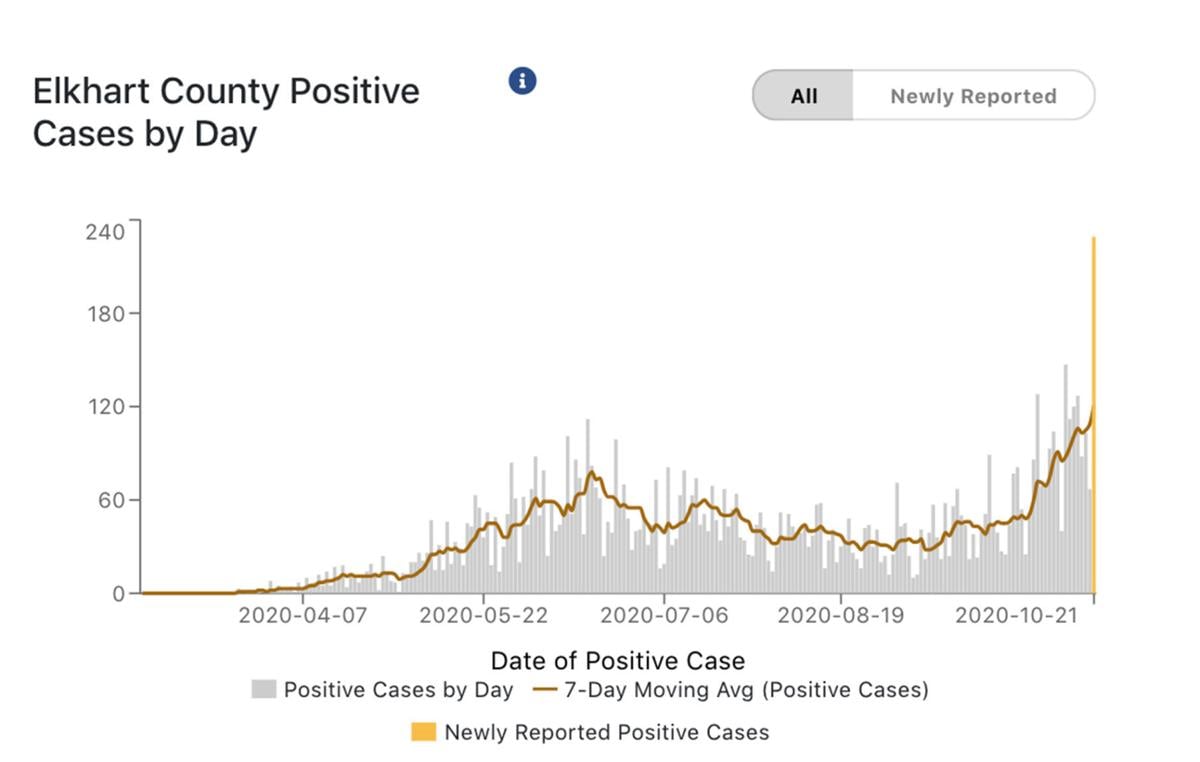 Elkhart County set a new record of new COVID-19 Wednesday, shown by the yellow bar to the right, as 229 new cases were recorded. The previous record, from a week earlier, was 147. 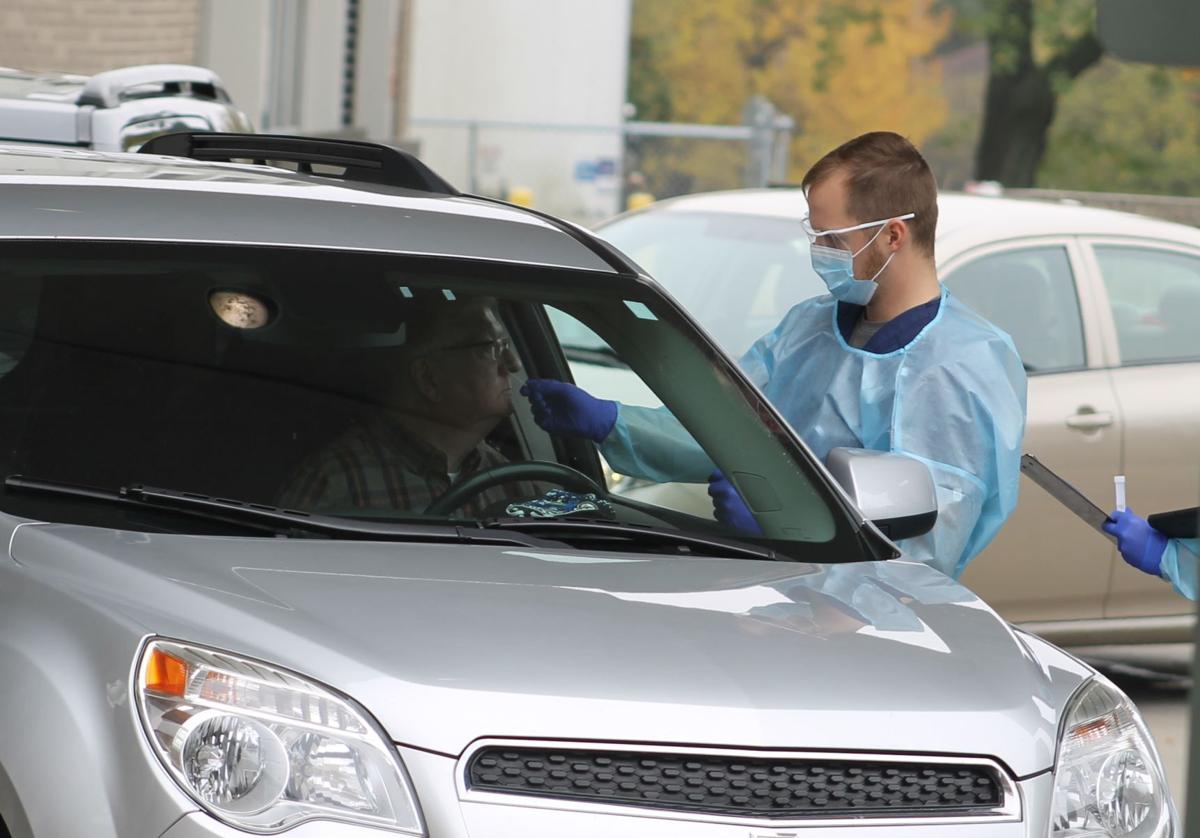 Cars line up at a drive-thru COVID-19 testing site Thursday at Elkhart General Hospital. The number of confirmed COVID cases in the county and across the state jumped to record-setting highs, the Indiana State Department of Health reported Thursday.

Elkhart County set a new record of new COVID-19 Wednesday, shown by the yellow bar to the right, as 229 new cases were recorded. The previous record, from a week earlier, was 147.

Cars line up at a drive-thru COVID-19 testing site Thursday at Elkhart General Hospital. The number of confirmed COVID cases in the county and across the state jumped to record-setting highs, the Indiana State Department of Health reported Thursday.

ELKHART — Elkhart County and the state both broke their one-day record for new COVID-19 cases Thursday.

Elkhart County topped 200 cases in a day for the first time Wednesday with 229 new cases. The previous record, set last Wednesday, was 147. The new tally pushed the county’s seven-day average up to 121 cases per day, which is also a new high.

Statewide, 42 additional deaths were reported. They occurred over multiple days. Forty-two is also the highest seven-day average of deaths the state has ever had. That occurred in April. The current seven-day average is 22, up from about 10 per day from July through mid-September.

In Elkhart County, the positive test rate continues to climb. The seven-day average for individuals is 22.2 percent, 0.1 percent below the record set on April 14. The seven-day average for all tests has moved from 5.22 percent a month ago to 11.2 percent as of Oct. 15, which is the latest date that has non-preliminary data for the positive test rate.

A positive test rate for all tests of under 15 percent kept Elkhart County from moving from orange to red COVID-19 alert status this week, according to health officials, but the Elkhart County Health Department said that could well change by the end of this week.

The number of people getting tested has reached a seven-day average of 365 as of Oct. 15. That is well above the about 220 a day in parts of September, but below the more than 400 a day in June.

In total, Elkhart County has had 8,759 confirmed cases of COVID-19. To date, 58,836 county residents have been tested, and 135 have died. About 94.8 percent of the deaths in Elkhart County occurred among people who were 60 or older. Those who are 59 or younger make up 79.7 percent of the residents who have been infected. The biggest number of infections is among people between 20 and 29.

“The increase in the number of new cases we are seeing is very troubling,” she said. “Our hospitals are already at capacity. Please stay six feet from people not in your household, wear a mask that covers your mouth and nose in public, and wash hands frequently. If you are exposed to someone who has tested positive, or if you have any symptoms, even mild ones, please get tested.”

Trump said it would magically disappear and that we are “rounding the corner”....does he even read the briefings or think he supporters are that dumb to believe him? The United States hit an all time high of over 83,000 new cases in one day...he has no plan and won’t lead the country by example. He has failed this country. 225,000 Americans have died. He does not deserve a 2nd term...we cannot afford not to vote him out. Wear a mask, wash your hands, keep a distance, scientist and health officials know what they are talking about and this is not a hoax....it real!

and STILL the governor doesn't want to do anything and implement restrictions....STILL....and you wonder why the CDC and the State of Indiana didn't want to release their report. He is just as bad as Trump....no action, and when he does, it's too late....

What absolutely floors me is that neither the mayor or the commissioners will go against Holcomb and tighten things up. Things are as bad as they have EVER been in Elkhart, and all we get are "Recommendations"......Its obvious that people that are left to their own judgment aren't able to solve this on their own. Nat'l guard at nursing homes? Potential Field hospitals in Elkhart? What does it take? One of your own family members in the hospital?

Few reasons why I am not suprised and expected a spike, outside of professionals warnings. As I a trucker, I'm seeing previous "hotspot" citizens running north, most notably Floridians. I also see huge numbers not wearing mask, not washing hands, at numerous truck stops in the south and east. I hope people dont take this personal, but the vast majority acting in such a manner are Whites. I guess since they contract the virus at a lower rate and so many places I drive are Trump strongholds, they dont care. "It is, what it is".

Ah, so THIS is what "rounding the turn" looks like. Wouldn't it be easier to just say record breaking cases abound?

Holly Cow! Thanks for keeping us updated. I guess it isn't magically disappearing like trump said it would. What's wrong with people....just wear a stupid mask... Employers and Businesses need to make sure and enforce it.. If people aren't going to wear it, then keep them out and start issuing penalties and civil fines.... Hospitals are getting full...Doctors and Nurses are working long hours in dangerous conditions... We knew this was coming....Start looking out for others. Wear a mask, wash your hands and keep a distance. Trump is mocking the leading pandemic scientist because he is "tired" of hearing about it.... It's not a hoax! It's real, and it isn't going away until a vaccine is here.... Listen to Health Officials and scientist....do your part! Over 222,000 Americans have died, and trump is "tired" of hearing about it..."It is what it is" Donald Trump 8/4/2020

Hey Joe! You finally said something that makes sense. Was your hands, wear a mask, and distance. And then it ain't dangerous. The bug won't permeate your skin. Remember when! Remember the initial info on covid. Lots of untruths or maybe misinformation. Remember aids Joe! Same things were said about covid! Remember when. By the way Joe! Did ya get your flu shot?

A wise man once said nothing at all...