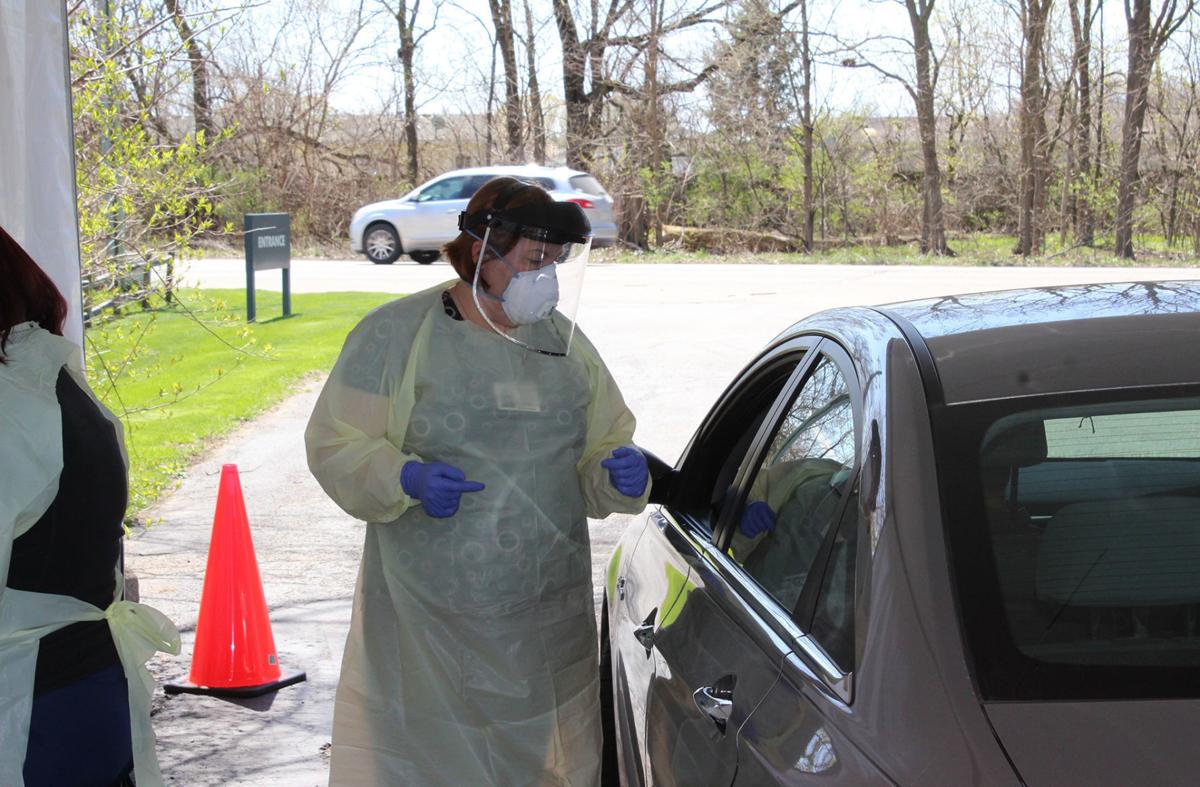 A man is tested for COVID-19 in a drive-thru tent at Concord Family Medicine in Elkhart in this April 20 file photo. Forty-three new infections were reported in Elkhart County on Wednesday. 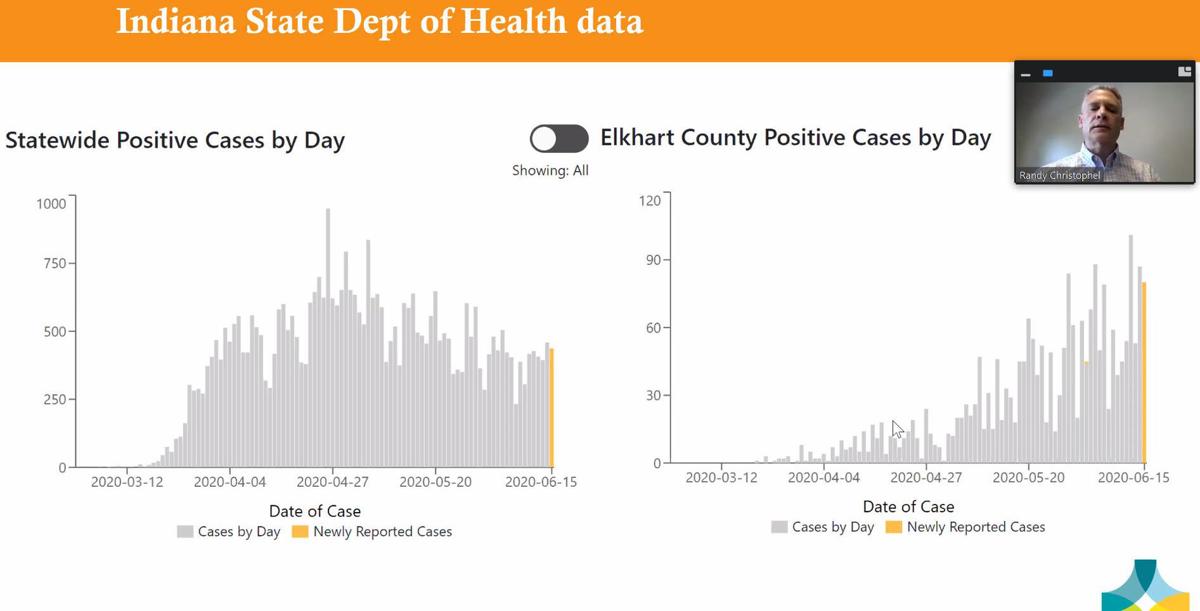 A man is tested for COVID-19 in a drive-thru tent at Concord Family Medicine in Elkhart in this April 20 file photo. Forty-three new infections were reported in Elkhart County on Wednesday.

GOSHEN — As COVID-19 cases in Elkhart County continue to rise, hospital officials warn that their capacity could soon feel the pinch.

Randy Christophel, president of Goshen Health, spoke to the Goshen Common Council on Tuesday night about the trend in positive coronavirus cases and what it could mean for hospitals in and around Elkhart County. He said the county had reached No. 2 in Indiana for the number of positive cases per 10,000 residents, after experiencing a delayed increase cycle compared to the state overall.

“The state kind of peaked back here in later April, and so as the governor started rolling out the phased reopening plan it made perfect sense from a state perspective, ‘cause you could see the downward trend,” he said. “When you lay Elkhart County next to that, we’re heading exactly the opposite direction, and so still very much on an increasing trend.”

The total number of positive cases in the county was 2,248 as of Tuesday evening, and he said he expected Elkhart County to pass Allen County on Wednesday. State data later showed that to be true, as 2,280 total cases were reported in Elkhart County compared to 2,277 in Allen County. That gives Elkhart County the third highest number of infections recorded since mid-March, behind Marion and Lake counties.

Younger people make up a larger share of Elkhart County’s positive cases than you see elsewhere, he said. Almost 15 percent of cases are in the under-20 age group, compared to 5.7 percent in the rest of the state.

“I think that that speaks to the manufacturing community that we have, maybe some of these younger people working,” she said during a weekly update Monday. “And also just being out and socializing more. We’re in the graduation party season, things like that. I think people just need to continue to be diligent and to continue to be safe.”

Christophel noted that, despite earlier concerns about having enough ventilators and intensive care units, the issue now is simply having enough hospital beds. He pointed to the recent spike of 101 new positive daily cases and said it should translate into 15 new hospital admissions.

“Our experience is about 15 percent of positive cases get admitted to the hospital. So when we see 101, that means 15 of those will eventually get admitted to the hospital,” he told council. “Our correlation studies show it’s on average about six days after a positive test result is when somebody gets admitted. So that’s important from a hospital capacity standpoint.”

For much of April, the number of admissions for COVID-19 patients at Goshen Hospital was between zero and two a day. It increased to two or three a day in May, with some days as high as four or five.

“So that 101 day, that was three days ago. Move forward another three or four days and this chart, in terms of admissions, will keep going up,” he said.

Christophel said a quick check of hospitals in the region showed that their beds are starting to fill up.

“Anecdotal hospital capacity information, and this is from a phone call around to the hospitals yesterday: You’ve got Lutheran and Parkview in Fort Wayne, very full, quite busy,” he said. “We still have capacity, but at this rate, we will run out. If this continues, we will be tight on capacity here within the next week or two at the most.”

He said he had similar conversations with other hospitals, including Beacon facilities in Elkhart and Memorial.

“This trend is concerning because it’s starting to press hospital capacity,” he said.

Bache remarked in her own update on seeing the number of hospitalizations pick up, something they’re watching closely. She said they’re being diligent with where they place people who show symptoms.

“Anybody who has any symptoms or anybody who has any risk, we are testing them upon admission to the hospital so that we can appropriately cohort them and make sure that we have all appropriate infection prevention measures in place,” she said. “All of our COVID patients are in special units that are for only the COVID patients, and that allows us to really keep our practices and keep our other patients safe and separate.”

Speaking on what is contributing to the rise in cases, Christophel said the willingness to guard against the virus is flagging among area residents. People are also becoming impatient about getting back together in family and social gatherings.

“People just don’t want to comply with any restrictions. So you start to see mask utilization going down, social distancing going down,” he said. “Hearing lots of stories of inconsistent application of safety precautions in employers. Some are doing great, some are kind of loose. We’ve even heard stories of plant managers kind of forcing people to come in when they weren’t feeling well.”

Christophel had strong words about the messaging that’s come out from local officials.

“I could get picked on about this, but there’s been just truly lack of urgency in some of the messaging going out, from the health department and our county leaders,” he said. “We could have done better with this. It’s easy to be a backseat reviewer on this, but in terms of restrictions or putting mask requirements on, we’re behind and we’ve got to do better with our messaging getting out.”

As a consequence, he said, the county is seeing a disproportionate share of positive test results in the Hispanic and Amish populations. He acknowledged that efforts have started in that regard.

Official messaging will also have to change to better counter negative sentiments about wearing face masks, Christophel said. He also hopes that presenting testimonials from coronavirus patients who have recovered will hit home where other messages have started falling on deaf ears.