If you need to purchase a subscription.
You are the owner of this article.
Edit Article Add New Article
You have permission to edit this article.
Edit
Hometown
News
Obituaries
Sports
Features
Schools
Business
Opinion
Classifieds
E-Edition
Subscribe
1 of 2

In this still image from an April 19, 2014, YouTube video, then-Sheriff Brad Rogers, right, shakes hands with Oath Keepers founder Stewart Rhodes before speaking at the Nevada ranch of Clive Bundy. 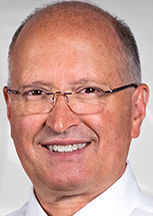 GOSHEN — As he watched the deadly events that unfolded at the U.S. Capitol, Elkhart County Commissioner Brad Rogers spoke against the violence of a mob that included members of a right-wing militia group he once stood with.

The FBI has charged several people who it says are members of the Oath Keepers for their alleged involvement in the Jan. 6 storming of the Capitol building, which ultimately left five people dead. It describes the organization as an anti-government militia that recruits current and former military, law enforcement and first responders.

Joe, you can’t believe the FBI is not political.

Apolitical? Joe! What alternative world do you live in? I leave you with this name. James Comey! lol

Brad is dyed in the wool crazy. Those who voted for him make me sad.

Spinning Big Time... I don't recall him disavowing the Oath Keepers back when he went out to the Bundy's...and wore the local sheriff uniform....Only know after the insurrection caused by the republican president and encourage and enabled by the republican party (including 3 in Indiana) that he NOW disavows....nope...not buying it...too late...

Wow, how inclusive of Frisco and Navy. Did the man commit a crime? You are both welcome to run against him and take his job, then we can see what is in your closet, hidden under the dirty laundry. Pathetic...

Watch what they do and not what they say. He keeps fighting to deny covid risks by wanting to open everything up while this deadly pandemic continues to rage out of control. Who can say 400,000 dead and not feel deep and total sadness and grief.

The FBI cared in 2014 when they came to interview him.

The fbi is political the last 2 decades . They never came to investigate the burning of a trump supporters truck , a hate crime, mle the hate crimes committed against the lady on main street . We know the fbi s true colors so your statement holds no water

Revolution, your opinion has no factual meaning. The FBI is apolitical. They learned the lesson of J Edger.