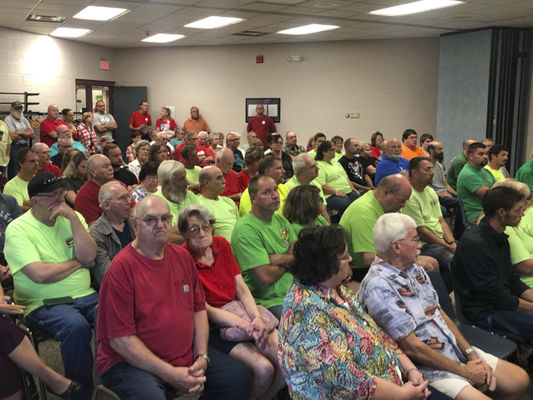 More than 100 people attended the Elkhart County Plan Commission meeting on Thursday as the panel voted on a proposed expansion of the Osceola Dragway. Supporters of the expansion generally wore green, while opponents wore red. Many had to stand in the back or outside the room during the three-hour hearing. 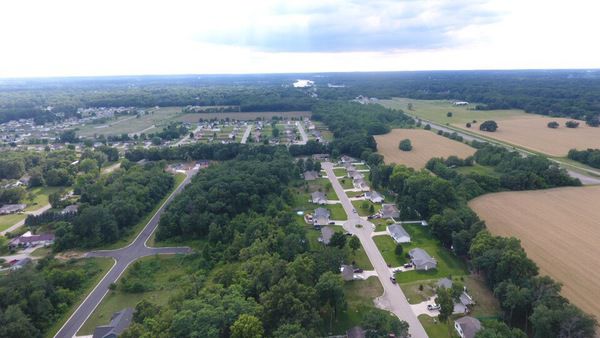 This photo from a drone shows the Osceola Dragway to the right and residential areas to the left. Plans call for the addition of a race track and other developments by the strip's new owners.

More than 100 people attended the Elkhart County Plan Commission meeting on Thursday as the panel voted on a proposed expansion of the Osceola Dragway. Supporters of the expansion generally wore green, while opponents wore red. Many had to stand in the back or outside the room during the three-hour hearing.

This photo from a drone shows the Osceola Dragway to the right and residential areas to the left. Plans call for the addition of a race track and other developments by the strip's new owners.

GOSHEN — For those hoping that the Osceola Dragway on Ash Road will expand, a marathon meeting of the Elkhart County Plan Commission brought new hope Thursday.

Three hours into the meeting, after a presentation by a racetrack representative and dozens of proponents and opponents voicing their opinions, the Plan Commission voted 8-1 in favor of a plan to improve the existing drag strip, put up a business park and install a racetrack.

Homeowners in the residential neighborhood surrounding the drag strip do not want the additional noise and traffic they expect the racetrack will produce. Proponents, however, believe the plan will bring new business and give drivers with a need for speed a safe place to live out their passion.

Ruth Chizum, the longtime owner of the drag strip, has been looking to sell for more than a year and has found a buyer in Terry McMillen, who wishes to turn the drag strip into Hoosier Motorsports and Business Park.

More than 100 people showed up to the Plan Commission meeting, where many had to stand and some didn't fit in the room. To make it easy for commissioners to see who were in favor of what, most proponents dressed in green, while opponents dressed in red. A show of hands indicated those in favor of the expansion were in the majority at the meeting, though not by a large margin.

The existing drag strip is in the part of the 171-acre property that is farthest from homes, and trees shield homes to one side from part of the noise created by the fast cars. Still, many of the homeowners in the area said the drag strip is loud on the weekends.

The proposed racetrack would have its fastest section just 100 feet from a residential neighborhood, and that has many homeowners concerned about even more noise.

Kevin Foy, who lives north of the St. Joseph River, is worried that his property value will decrease.

"I've lived there for 30 years, and I'm hoping to sell my house and get myself a profit when I do sell it. But with the changes that are being made, I may have a loss in value," he said.

One idea, proposed by Lyle Fisel, received support from people in attendance. He said he likes the project, but not in a residential neighborhood.

Though emotions sometimes ran high, Fisel said, again to applause, that having a public hearing and a vote is the right way to decide such matters.

"This is the way democracy is supposed to work, and as a fellow veteran, there's veterans on both sides of this argument, and we wouldn't be here if it wasn't for what you people have done, so thank you," Fisel said.

Ken Jones, of Jones Petrie Rafinski, who spoke on behalf of the developers, said McMillen wants to be a good neighbor and develop a quality site that brings something new to Elkhart County.

He said there is a substantial treeline between the location of the new racetrack and the nearby houses. In addition, a 6-foot tree-covered and fenced barrier will be built to reduce noise and improve safety.

Jones said the racetrack and business park would add traffic to an area that some residents say is already too busy.

"We're hoping too, anyway. But we're going to make it better than it has been for 62 years," he said.

According to Jones, 500 vehicles of spectators could be parked by the track, and McMillen hopes that will happen.

Jones assured residents that they won't need to worry about their sleep because of the proposed development, as both the drag strip and the racetrack will be in use only during the daytime.

Both he and some of the proponents of the plan said improvements would benefit the community, as law enforcement could use the racetrack for training, students could learn about engines, and people with a heavy right foot will have a good alternative to street racing, which some in the audience admitted to having done before they learned of the drag strip.

Osceola Dragway on Friday will celebrate the 62nd anniversary of its first race, Ruth Chizum said.

"Everyone that built and moved into those houses should have known there was a motorsport facility," she said.

She said that even before the drag strip, there was a motorcycle dirt track. Before then, there was an airstrip built in the 1940s.

Chizum also said Osceola Dragway has always been a place that has gotten people of all ages to come together.

"We have always been a family-friendly facility and often enjoyed three generations of racers," she said. "I'm very excited about Hoosier Motorsports' proposed improvements and developments for the next generation of racers."

She argued that the community can feel safe about having McMillen as a new owner of the Osceola Dragway, which has been owned by the Chizums for its entire history.

"Terry McMillen, who is a longtime Elkhart-area resident, is a prominent and well-respected figure in motorsports on the national level. I feel comfortable and honored to turn the reigns over to a man such as Terry," she said.

Not all in the room shared Chizum's trust in the new ownership.

Sally Hernandez, who brought a petition against the proposed development signed by 235 people, said rezoning Osceola Dragway as M2, a heavy industrial zone, would allow McMillen, or owners after him, to make further additions without a public hearing.

Planners, however, said no additional changes could be made without approval as the proposed zoning change would be a planned unit development, or PUD, which is specific to the proposed development and would require future public hearings should the owners wish to further develop the site.

Hernandez, in presenting the petition against the development, complained that nearby property owners had learned about the proposed change only a week earlier, limiting their time to organize against it. She said only 160 property owners, those within 300 feet of the drag strip, had been directly notified, despite there being 800 homes within half a mile.

County staff recommended approving the improvement of the existing drag strip and developing the business park but encouraged the commission to deny the development of a new racetrack.

In an 8-1 vote, the Plan Commission recommended that the entire plan should be approved by the Elkhart County Board of Commissioners when it meets at 9 a.m. Monday, Oct. 21. Jeff Burbrink voted against the recommendation.