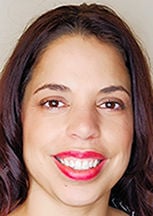 Elkhart County Health Officer Dr. Bethany Wait gave an update to the county Board of Commissioners on Monday. She said more than 20,900 people have received their first dose of the COVID-19 vaccine locally and about 12,271 people have been fully vaccinated.

Hispanic residents make up about 7 percent of the state population – and even more locally – but represent only 4.6 percent of vaccinations.

The health department hopes to vaccinate 300 people a day, a number she said they might hit this week. Elkhart General Hospital is distributing about 600 vaccines a week and Goshen Health is doing 400, she said.

Bad weather caused bottlenecks in the supply lines from the federal stockpile to the states, meaning the county didn’t get its full shipment last time, Wait said. She said Vista Community Health Center made up the difference.

“We should get our full shipments back in this week. I have to say thank you to Vista, because they did give us 250 vaccines because we didn’t get our shipment in,” she said. “And so we appreciate that and we will pay them back as soon as we get our shipment in.”

The vaccine is available to people 65 and older, in addition to health care workers and first responders. She said the state has not yet announced when it will be opened to people 60 and older.

State data show that the moving average for positive cases has remained in the 20s for much of February.

“As for numbers, they’re looking better. We had just a small bump over the Super Bowl weekend, but otherwise we’re looking pretty good,” Wait said. “Our hospital numbers did double because of that, but our hospitals are still pretty good. And when I say ‘double’ it went from like six to 12 individuals, at Goshen Hospital that is.”

Based on the positivity rate, Wait said she expects the county to stay where it is on the state’s color-coded advisory system.

The state uses the number of weekly cases per 100,000 residents, which in Elkhart County is currently 77, along with the positive test rate, to determine a county's color code.

“I anticipate that we will stay yellow this week,” Wait said. “Our percent positivity is 5.29 percent. It needs to be under 5 percent to go to blue.”

As a result, she said special events will continue to be limited to 50 percent capacity. Wait said she’s most concerned with weddings as the health department is approving event plans.

That’s because enforcing safety measures like face masks is being left up to the families involved, according to Wait.

“We’re getting a lot of requests for weddings. The event places though do not do any of the supervision while the event is going on. It would be up to the individuals who are renting the hall,” she said. “So I am going to start talking more with those particular businesses about what we can do, as I’m a little bit concerned about spreader events.”

Some venues are putting caps on attendance, she said in answer to a question from Commissioner Suzie Weirick. Wait said that follows some bad experiences with guests last year.

“The feedback that we’ve gotten from them has been that when we reopened in October, November-ish, they had events where people refused to do social distancing, refused to wear masks, and were either belligerent or offensive to the employees who worked at the different event centers,” Wait said. “We will respect what the event centers want to do. If they want to set their capacity, that is fine with the health department. We will not make them follow the 50 percent capacity if they don’t feel like they can enforce it safely.”

This article was updated to correct an erroneous statement on how each county's color code is determined.