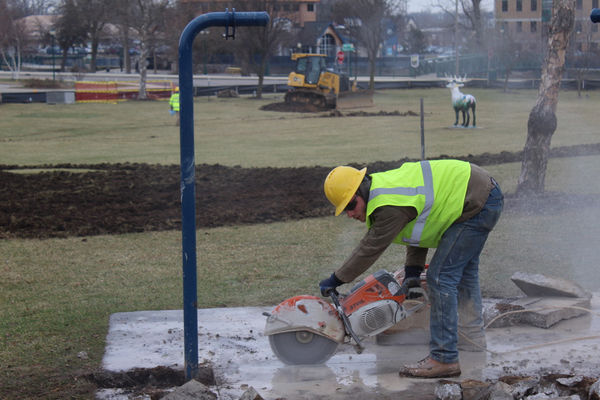 A C&E Excavating worker cuts down a swing at Central Park in Elkhart on Monday afternoon. 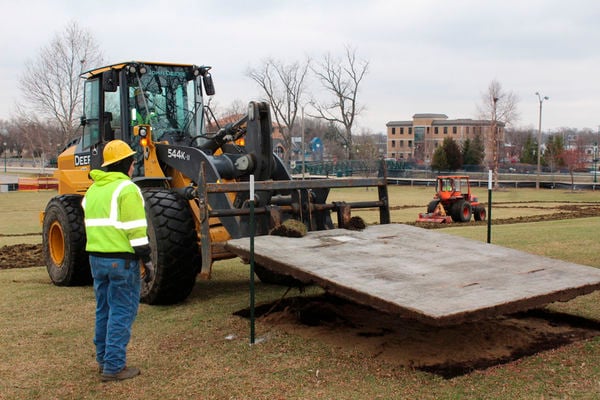 A wheel loader removes a cement block from Central Park as renovation of the park begins Monday.

A C&E Excavating worker cuts down a swing at Central Park in Elkhart on Monday afternoon.

A wheel loader removes a cement block from Central Park as renovation of the park begins Monday.

ELKHART — Work on the Central Park renovation in downtown Elkhart began on Monday.

A crew from C&E Excavating started preparing the park for construction by removing the topsoil, lifting out cement blocks and cutting down swings in the park.

The city plans to spend millions to give new life to the Civic Plaza and Central Park, in what is being called Central Plaza.

The current design for the new greenspace features a cafe, restrooms, scene, event lawn, quilt garden and shaded area under new trees. A playground has been shown in some plans and could be a part of a second phase.

If the plans for Central Plaza become reality, the green space would grow somewhat, while the size of the plaza would almost be tripled. The two would be connected where they are now separated by a parking lot, and so parking would decrease from 270 to about 170. New underground parking lots have been proposed to go under two buildings that could go up along Franklin Street.

Putting up those buildings is among the most controversial aspects of the project, as some residents fear buildings could block the view of the Lerner Theatre and IUSB Elkhart. Others say the block of Main Street that holds the Civic Plaza and the Prosecutor’s Office separates the two sides of the downtown shopping area, so new buildings on the south side of the plaza would help draw the two sides together.

Rundell Ernstberger Associates, the company charged with designing the new space, said a decision on the buildings would not only depend on public input but also the local economy in the next few years.

The cost of the entire Central Plaza project is unclear, as many decisions have yet to be made and phases need to be awarded. Phase one has an estimated price tag of $4.5 million.