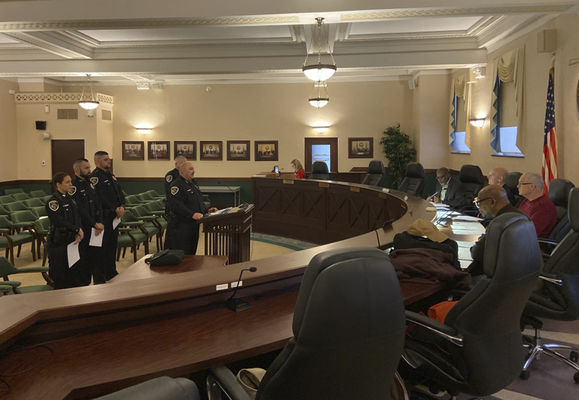 ELKHART — Four Elkhart police officers were applauded on Monday for stopping an armed robbery and preventing a possible hostage situation.

The officers were called to the Dollar General at 1800 E. Bristol St. on Oct. 2, after a family member of a store employee had overheard the robbery on the phone.

Patrolmen Paul Vandenburg, Breann Hall, Seth Watkins and Emily Lamkin quickly secured a perimeter around the business. Watkins then saw movement at the back door as a suspect tried to escape from the building. The officers ordered the suspect to come out, but the suspect retreated.

Believing the robbers were still inside and knowing that store employees were in immediate danger, the officers devised a quick entry plan to prevent a hostage situation.

Upon entry, the officers found two suspects by the front door, and the suspects surrendered without incident. Officers rescued two store employees from an office inside the business.

“The administration from the Police Department commends the officers for their actions, which prevented a possible hostage situation and led to the arrest of two dangerous suspects,” Chief of Police Chris Snyder told the Police Merit Commission on Monday.

He also praised the department’s training, which he said is how officers learned to put together action plans and follow through.

“But, more importantly, it shows what our officers are able to accomplish,” Snyder said. “It’s just another great example of what they’re doing to be out there every day and protect our community.”

Police Merit Commission President James Rieckhoff said he wished there were more members of the public who had been there on Monday morning to see the officers receive their commendation.

“I thank you on behalf of all the folks who aren’t here,” he said.

Unrelated to the commendations, Snyder told the commission that four officers received written reprimands. Two others face one- and two-day unpaid suspensions.

Elkhart police will not share further details on actions that led to reprimands.

Snyder said there was a higher-than-usual number of disciplinary items on the commission’s December agenda because the department, with the help of an independent review, is reworking its process.

“To make sure that we are fair to our officers but that we are transparent to the community,” Snyder said.

Discipline was a heavily discussed issue a year ago when Snyder took over the department after former Chief Ed Windbigler was asked to resign. As Snyder’s first year as chief is coming to an end, he said that he doesn’t expect his officers to never make mistakes, especially since he has many relatively new officers.

Michael VanScoik was promoted from patrolman on Oct. 7. Then, on Oct. 21, he was promoted to evidence detective. Snyder said that having disciplinary action and promotions come up for the same officer during one merit commission meeting is not a problem.

“We’re not going to let a minor reprimand, like a written reprimand, interfere with the advancement of somebody’s career, as long as one has nothing to do with the other,” he said.

As an example, he said that if an officer had disciplinary issues with vehicle pursuits, that officer would be an unlikely candidate for training others in that subject.

Cpls. Travis Hamlin and Benjamin Martin were both promoted to sergeant effective Nov. 4.

Sgt. Nathan Lanzen, who is one of two Elkhart officers named in a wrongful death lawsuit, was reassigned to the Services Division as a training sergeant.

Patrolmen Emily Swindle and Derek Baldridge submitted their resignations in October. They joined the department in 2017 and 2018, respectively. According to Snyder, their resignations were both the result of wanting to live closer to family.