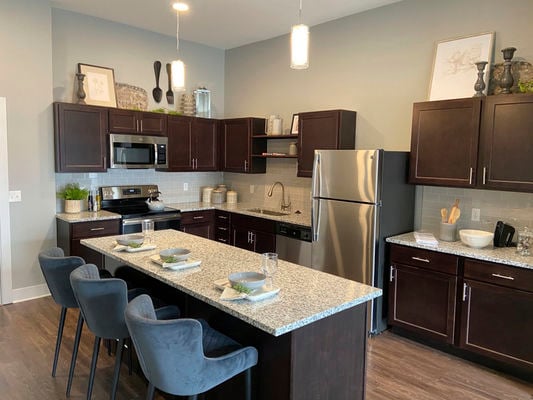 A furnished kitchen in a two-bedroom apartment at Stonewater at the Riverwalk shows prospective residents what their new home might look like. 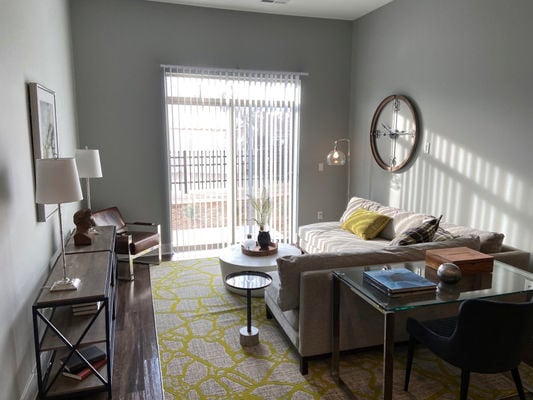 An apartment on the first floor of the Stonewater at the Riverwalk has been furnished to show prospective residents what their new home might look like.

A furnished kitchen in a two-bedroom apartment at Stonewater at the Riverwalk shows prospective residents what their new home might look like.

An apartment on the first floor of the Stonewater at the Riverwalk has been furnished to show prospective residents what their new home might look like.

ELKHART — The city’s newest apartment complex is open for business.

And for those who have been looking for a new home with high-end amenities in the River District right between Elkhart Avenue and the Elkhart River, there is still hope. About 90 percent of the Stonewater at the Riverwalk apartments have yet to be rented, and monthly prices start at $760. The largest homes start at $2,650.

Property manager Kerri Seufert said the first residents moved in on Nov. 12, with 18 of the 203 apartments being occupied by Christmas.

“We’d like to have a little bit more, but, unfortunately, we opened at a slow season for leasing,” she said.

The apartment complex, which is also known by the name of its developer, Flaherty & Collins, was supposed to open in the spring of 2019, but cold weather a year ago delayed construction at 318 S. Elkhart Ave.

According to Seufert, Stonewater is the only place in Elkhart to offer what she calls luxury apartments.

“You really can’t find the amenities that we have here anywhere else in Elkhart,” she said.

Those amenities include a 24-hour fitness center, a wellness studio, and an outdoor saltwater swimming pool surrounded by outdoor space facing the Elkhart River. Pets are allowed, and there’s a pet grooming room on the first floor. Though all apartments come with washers and dryers, the complex also has a dry-cleaning service.

“Just of lot of different stuff going on here in Stonewater,” Seufert said

And though Stonewater is a gated community, residents can house their guests at two guest apartments that are essentially hotel rooms that can be rented for $100 per night. Guests have access to all the amenities.

Having guest apartments inside the apartment complex is out of the ordinary, Seufert said. Flaherty & Collins decided to include the rooms because they anticipated that new residents who might be downsizing would be used to housing guests at their homes rather than sending them to a hotel. Guest apartments mean they would still be able to do that.

The one- and two-bedroom apartments all have as many bathrooms and walk-in closets as bedrooms. Studio apartments range from 563 to 613 square feet, while one-bedrooms are 742 to 768, two-bedrooms are 1,049 to 1,201 and townhomes are 2,116 whether they have two or three bedrooms.

Resident Shari Durkin, who lives in one of the studio apartments with a balcony and a view of the Elkhart River, said her new home is just the right size and has everything she needs.

“It’s perfect,” she said. “When my friends and family visit they’re so impressed.”

Stonewater is the first of several new residential projects to be completed within the River District. Next door, Great Lakes Capital is building nearly as many units as well as a new Martin’s Super Market and 6,000 square feet of other retail. Other developers plan to build mixed-use development and townhomes near the new Elkhart Health & Aquatics Center, and 15 high-end condominiums are about to be built at the former Alick’s Home Medical property in the 900 block of East Jackson Boulevard. The Flaherty & Collins development itself includes 7,000 square feet of retail along Elkhart Avenue, though that has yet to open.

Outgoing Mayor Tim Neese, a Republican, has placed a large focus during his term on revitalizing the district and bringing more residential development, as he says too many people commute to Elkhart each day when they could be living here and paying property taxes.

But Neese and others involved in the revitalization of the River District have faced criticism for a lack of new low-priced housing there and throughout the city.

“Even though we are a gated community, we’re affordable. Our rents are something that anybody can afford,” she said.

And being in the River District helps make moving worth the cost, as many new and prospective residents tell Seufert that is a major attraction. The geographic features alone, with apartments facing the Elkhart River, are important to many. And others like a view of downtown, Seufert said.

For Durkin, it means a lot that the River District is under transformation to become a walkable community.

“I had spent spring break in Spain living downtown in a city for a week, and I was able to walk everywhere and I just loved it,” she said.

So she decided to downsize, selling her home to live in an urban setting. When she learned more about what was happening in the River District and how Stonewater would fit in, that was the right choice for her.

“I am so happy with Elkhart, how far we’ve come and the direction we’re heading,” she said. “It’s the Aquatics Center, it’s the Martin’s, it’s the emphasis on walkability.”

According to Seufert, Durkin is not alone in feeling that way.

“People are just excited to see how much this area had changed,” she said.