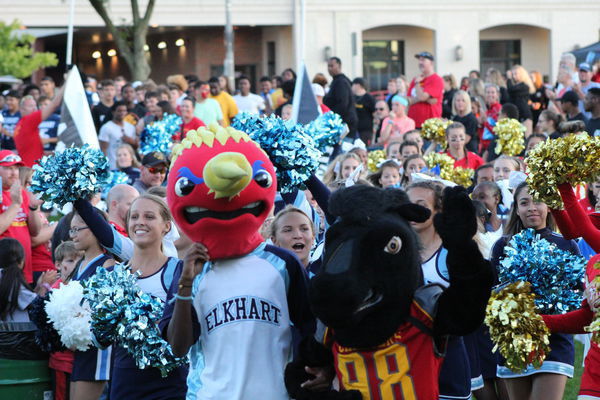 Elkhart Truth file photoStudents and their mascots rallied during the annual all-city Kickoff Classic pep rally in Elkhart in August. 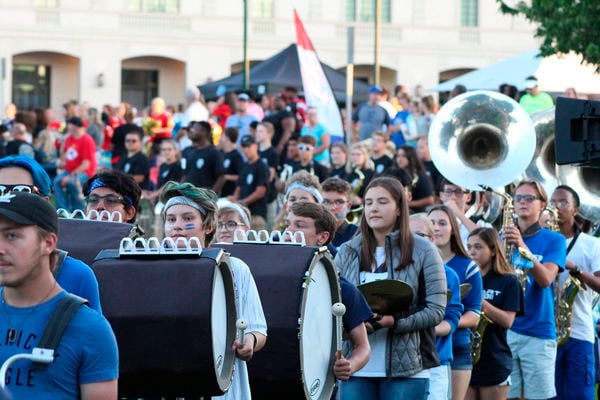 Elkhart Truth file photoStudents and their mascots rallied during the annual all-city Kickoff Classic pep rally in Elkhart in August.

The school corporation’s music department is working on the development of the high school’s new fight song. The music has been selected, but now the district is seeking the community’s help with writing the lyrics.

Lyric submissions will be overseen by an Elkhart Fight Song Committee comprised of administrators, athletic directors, band directors, students and a school board member.

The first option was to create an original song by paying a composer to write the music and lyrics.

But the concern about that choice was that the group would have no control over the quality of the piece, Burton said.

“If we didn’t like it, we would still have to pay the composer and we’d be stuck with the song,” he said.

Instead, the committee decided to use an existing college school song and adapt new lyrics that support the strengths and passion of the new high school.

“We felt this was our best option because we wanted to have that control element where we select our song,” Burton said. “We’re hoping to create a song that reflects our new beginning with the combined Elkhart High School.”

After it was decided to go with an existing song, Burton said, the committee listened to recordings of nearly 200 college fight songs and ended up choosing “War Eagle,” the school song for Auburn University.

“Most school songs in the area are college songs. There are only a few original compositions out there,” Burton said. “We wanted to have a cool song that isn’t being used by any northern Indiana schools. So, we checked all the schools in the northern part of the state, and none of the schools use Auburn as their fight song.”

The song was written by composer Robert Allen in the mid-1950s. Allen passed away in 2000. His wife, Patty Allen, is the owner of the composition and controls the licensing rights to the song.

“I’ve spoken with Mrs. Allen, who lives in New York City, about the school song,” Burton said. “She was excited to hear that we were considering her late husband’s song as the theme for our new high school.”

The committee is in the process of acquiring the rights to use the composition. Burton said the group received 50 percent approval from one of the two publishing companies that control ownership of the piece. The other 50 percent of the copywrite will be granted once the lyrics of the school song are approved for use, he said.

The committee opened the submissions window to the public this week. Ideas must be submitted by Jan. 31 to Burton at dburton@elkhart.k12.in.us.

After the submission window closes, Burton said the committee will meet and review all options and decide which lyrics are the best fit for the new school.

Burton said he expects the committee to make a final decision by mid-February.

“We are super excited about how the whole process has occurred and I think the community will really embrace the fight song,” he said. “It’s exciting and energetic.”

To listen to the song, visit https://youtu.be/xuBzYX_qYqg

I'm happy with having one high school.Blazers had been the name forever and should not been changed. That's history! My family and extended family are natives of Elkhart and we will always be Elkhart central Blazer !!! You can chand school location, change songs, change names but you can't take tradition and history out of the person! Will always be Elkhart Central and Blue Blazers!!

Atta boy, Kief. Stick with your manual typewriter and carbon paper too.