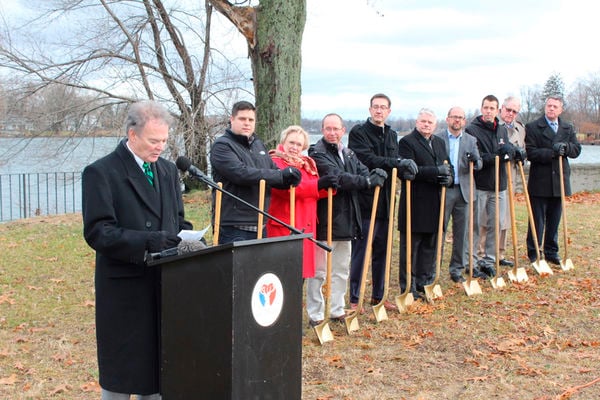 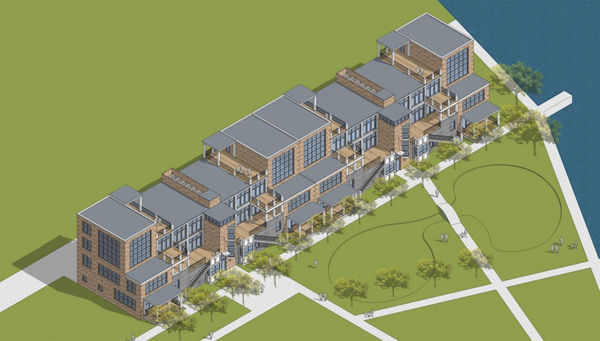 Illustration provided This rendering shows what the 15 high-end condominiums in the 900 block of Jackson Boulevard could look like.

Illustration provided This rendering shows what the 15 high-end condominiums in the 900 block of Jackson Boulevard could look like.

ELKHART — The saga of the former Alick's property between the St. Joseph and Elkhart rivers has reached a point of no return.

After a year of discussions, decisions and disappointments, the developers of 15 high-end condominiums broke ground in the 900 block of Jackson Boulevard on Monday morning, alongside Mayor Tim Neese and members of the city's Redevelopment Commission.

"Because of this vision, we are here today in celebrating another investment along the river banks of Elkhart," he said.

The city has spent about $1 million on the property, buying it for $600,000 in 2015 and then ridding it of old buildings. Portage Place Development bought it for $100,000, which is the same amount offered by the rowing club.

Neese said the Redevelopment Commission paid too much for the property, adding that the purchase took place before he took office in 2016.

Supporters of the sale to Portage Place Development have argued that the money spent can only be brought back by selling to someone who can redevelop the land and ensure the city can collect property tax in the future. It is estimated that the city's investment will be paid back in about 10 years.

Neese said the development puts money to work in the city. Developers are projecting a total cost for them of close to $10 million. But since buyers will have to finish the interiors themselves, a high estimate of the total investment is about $15 million.

"This is a very significant development for the City of Elkhart," he said.

David Weaver, one of the investors, said Portage Place boasts one of the most beautiful views on the upper St. Joseph River.

He said Portage Place will be an anchor to the east for the River District and mitigate the housing shortage in the city.

"It's time to build new housing stock and bring more investment on line in the River District.

Weaver, along with the other investors behind Portage Place, has proposed building 100,000 square feet of mixed-use development on unused land adjacent to the Elkhart Health & Aquatics Center on the western side of the River District.

Brian Smith, one of the investors, has said the price of a condominium will likely range from $200 to $250 per square foot, with the homes with a better view selling at a higher price. The condominiums will be sold as what Smith called a "vanilla box," allowing buyers to make their own decisions — and thereby also investments — for the interior. Each home will have a boat slip and a two-car garage.

According to Neese, down payments had been made for eight of the 15 condominiums before the groundbreaking. He said the development will add about $150,000 annually in property tax revenue for the city. Smith estimates it will be closer to $120,000 but said it will depend on how much the buyers put into the interiors.

The Redevelopment Commission's request for proposal earlier this year included a requirement that there would be public access to the St. Joseph River through the property — a vision of former Mayor Dick Moore, who was in office when the property was bought.

The rowing club's bid included public access through a park that would be on the eastern side of the property. Portage Place Development, however, argued that private property should not have public access, and they were able to convince the Redevelopment Commission.

Neese said a promise about securing public access made when the city bought the property was made before his term.

Another controversial part of the process came in the fall when soil borings revealed organic material under ground, making the property too unstable for building the condominiums without installing helical piers. That revelation came after the Redevelopment Commission had promised Portage Place Development that the site would be "shovel ready," and so the city ended up with the $350,000 bill to install the piers.

The original construction timeline set completion of the condominiums in the spring of 2021, but the completion date is now more unclear, as the soil issue delayed construction and the number of planned units has been reduced from 21 to 15.