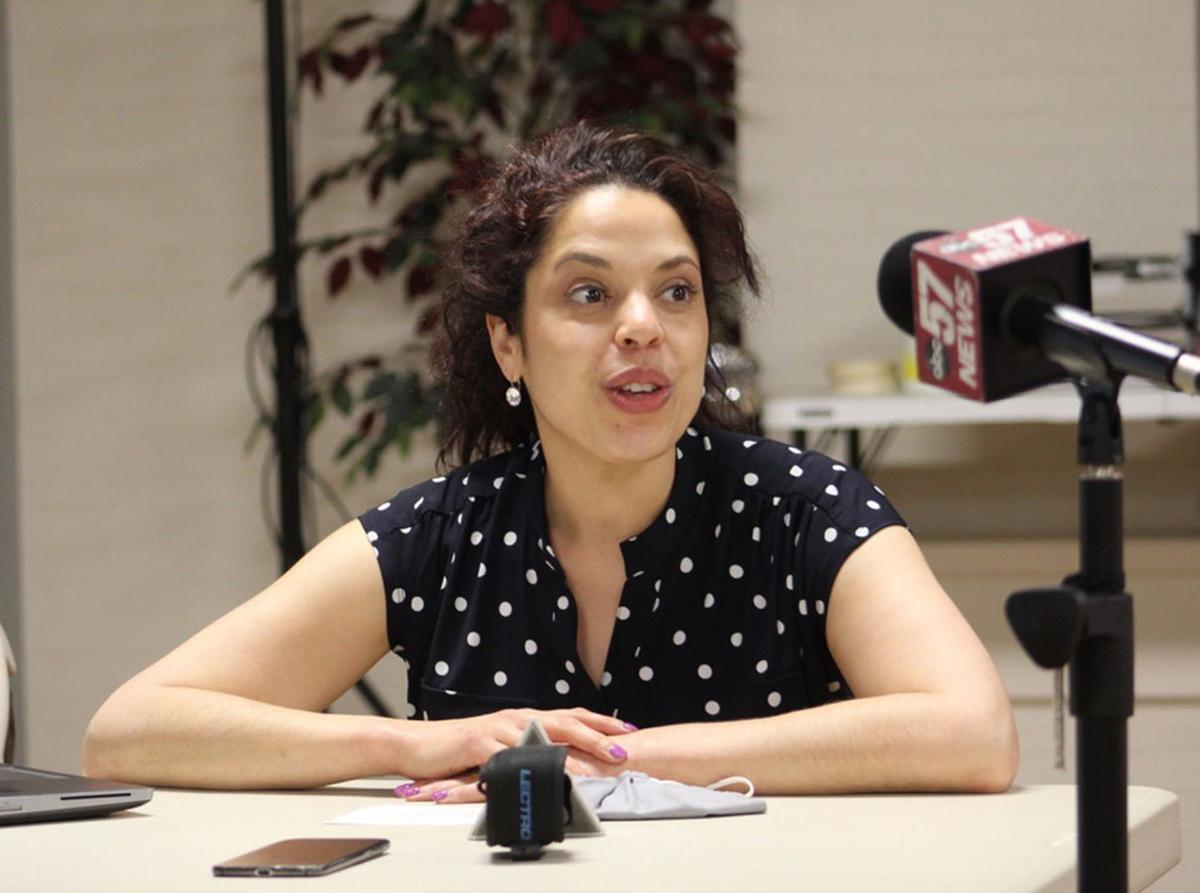 Elkhart County Health Officer Dr. Bethany Wait held a press conference Tuesday to share her concern that local hospitals are at capacity following a COVID-19 surge. She also said the county commissioners plan to end local restrictions if given the chance. 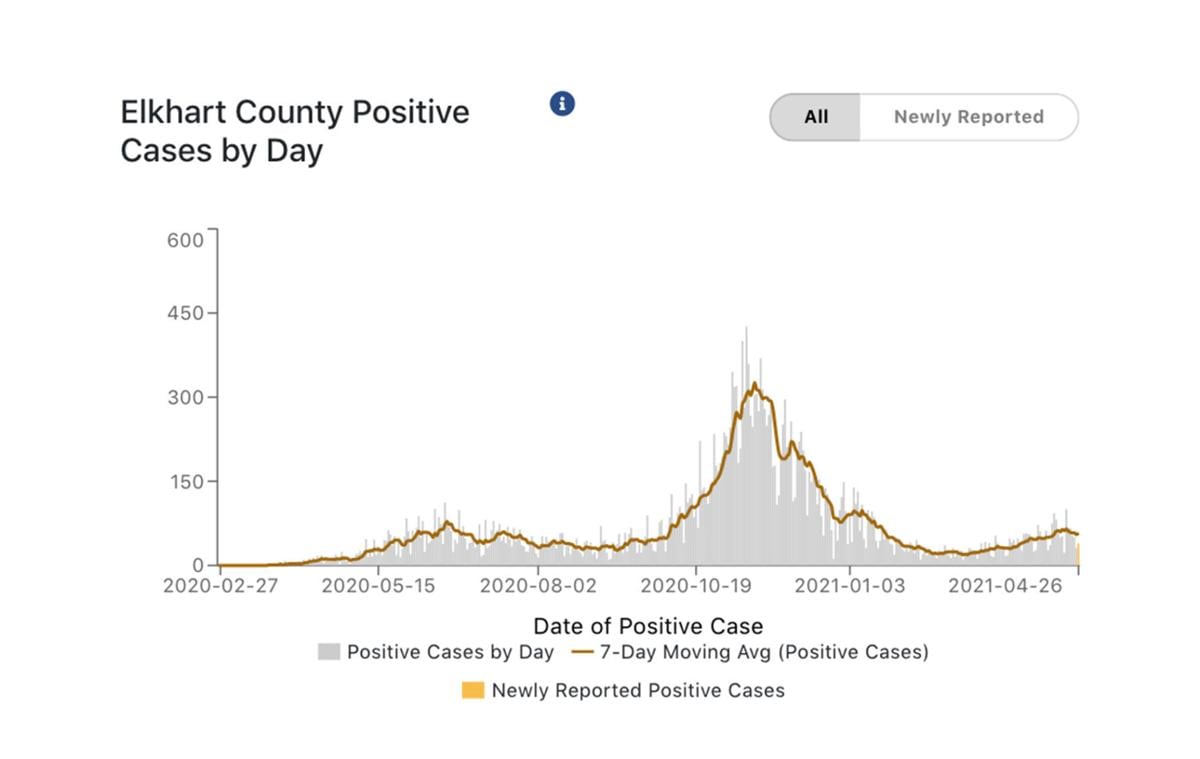 The number of daily COVID-19 infections in Elkhart County has plateaued around 60 in the past week, but hospitalizations caused by the disease have continued climbing.

Elkhart County Health Officer Dr. Bethany Wait held a press conference Tuesday to share her concern that local hospitals are at capacity following a COVID-19 surge. She also said the county commissioners plan to end local restrictions if given the chance.

The number of daily COVID-19 infections in Elkhart County has plateaued around 60 in the past week, but hospitalizations caused by the disease have continued climbing.

ELKHART — The Elkhart County mask mandate and limitations on event capacities will end if Gov. Eric Holcomb signs S.B. 5, a bill that would move power to implement restrictions from the county health officer to the county Board of Commissioners.

The commissioners informed Health Officer Dr. Bethany Wait that they intend to end the restrictions when that bill is signed, or if a veto is overridden. There would be no further coronavirus-related restrictions in the county at that point.

“Whatever the state’s going to do, we’re going to follow,” said Commissioner Frank Lucchese, R-1.

Lucchese said it is time to re-open the county now, as many – especially in at-risk populations – have gotten vaccinated, and most of those who do get sick are not hospitalized.

With vaccines being widely available to everyone 16 or older, Lucchese also argued that restrictions can no longer take the place of an individual’s personal responsibility to avoid getting sick.

“We’re starting to get to that tipping point where we have more vaccines than we do people willing to take it. Now it’s getting to the point where it’s personal responsibility. If you don’t feel safe, wear a mask. If you’ve been vaccinated, start living your life like you should,” he said.

Furthermore, while Wait has set a goal of getting 70 percent of adults vaccinated, Lucchese said he thinks it will be difficult to get more than 50 percent of Elkhart County residents vaccinated. Currently, the county is about halfway to that point.

Wait said she finds it concerning that S.B. 5 was passed and is now on the governor’s desk, and she was disappointed with the commissioners’ decision that they will end restrictions if given the chance.

“Our goal is to keep hospitals accessible, to keep schools open and to keep businesses open,” Wait said. “We’re at the brink of one of those three not being possible, but yet we’re not willing to keep a mask mandate or capacity limitations, which to me, at 2021, all that we have seen in the last year ... that I can’t get approval to continue something that needs to continue is extremely disappointing.”

Asked whether the commissioners should not take the advice of the county’s top health official, Lucchese said the local situation is looking better.

“The risk is a lot lower than it used to be, and things need to get back to normal,” he said.

The risk of death is indeed much lower than it was before vaccinations began. But Dr. Michelle Bache, Elkhart General Hospital’s vice president of medical affairs is concerned with the recent increase in infections and hospitalizations. Both Elkhart General and Goshen Hospital are at capacity, and the number of COVID-19 inpatients at Elkhart General increased by 68 percent in a week.

“Today, we are approaching inpatient numbers that haven’t been seen since the very beginning of the year,” Bache said.

Of the inpatients at Elkhart General on Tuesday, 37 were there for COVID-19. That is the highest number since mid-January. In early March, Elkhart General and Goshen Health had a combined five COVID-19 inpatients, but Goshen’s number was 27 on Wednesday, meaning that the county total was 64. Goshen Hospital’s inpatient census was in the mid-80s on Tuesday. In November, when the hospital’s census hit its all-time peak, it was in the 90s, according to a spokesperson.

The high number of patients, which health officials believe is caused by new and more contagious strains of coronavirus, could force Elkhart General to postpone elective procedures again, and wait times in the emergency room are already getting longer, according to Bache.

“This morning, I think there were 13 or 14 patients that were in the ER just waiting for a bed to open up,” she said.

Wait, at a press conference on Tuesday, emphasized that people should still go to the hospital if they have a health emergency.

“There’s always room for more individuals, so I do want to make it clear to everybody that if you have a life-threatening condition, you still need to go to the hospital,” she said.

However, there is good news. Despite the uptick in new infections (the county’s average has grown from 20 per day on March 1 to a recent plateau of about 60) and hospitalizations, the number of COVID-19 deaths is lower than during most of the pandemic, with eight deaths in March and five so far in April. In total, 433 county residents have died from COVID-19 since March 2020.

Bache and Wait said the decrease in deaths can be attributed to many at-risk Hoosiers having been vaccinated. County residents 60 or older have accounted for 92.2 percent of local COVID-19 deaths since last March, and nearly 65 percent of Hoosiers 60 or older are now fully vaccinated, with more having received their first of two doses.

Because many older people are now less likely to get infected or get severely ill, the average age for COVID-19 inpatients is much lower than earlier, according to Bache.

“We currently have patients who are in their 40s, their 30s and even their 20s, who are sick enough from their COVID infection that they require inpatient hospitalization,” she said. “Obviously, they’re still sick enough to need to be in the hospital, but we’re not seeing the very frail elderly nursing home patients. We haven’t seen a nursing home outbreak since vaccinations really started aggressively.”

While 36.3 percent of St. Joseph County residents 16 or older are fully vaccinated, the figure is 26.4 percent in Elkhart County. Statewide, the figure is 32.5 percent.

Wait said part of the explanation for St. Joseph County being ahead is that the University of Notre Dame has done a great job getting students vaccinated. As of April 15, more than 90 percent of undergraduate and professional students had received at least the first of two doses, the university said.

But Bache is concerned by Elkhart County falling behind.

“Our neighbors in St. Joseph County have almost 10 percent more of their population vaccinated than we do. We can do better than this. Help us get our infection rate down by doing your part to get vaccinated. Vaccines have been proven to be extremely effective in preventing infection, with only a few cases of COVID reported locally in individuals who are fully vaccinated,” Bache said.

The average number of Elkhart County residents getting vaccinated each day has dropped from around 1,100 per day before the Johnson & Johnson pause two weeks ago to 900 per day now. But Bache said there are enough doses to get more people vaccinated.

“We’re already to a point where our supply of vaccine is exceeding our demand,” she said. “We’re seeing no-shows for our appointments at the vaccine clinic.”

" Notre Dame doing a great job ? " They forced everyone to get the vaccinations , not cool In a supposed free country

A private school can’t do what they want? In a free country? What?

Once again Joe knows not of what he speaks nor professes to know. Dr Bache is indeed an MD. She has 2 degrees. One from IU Med school and one in Emergency medicine from University of Michigan. While Dr Waite, not a piker, has a degree in family practice. It's not like either one is practicing as an attorney with no license!

why would the practice being an attorney? They are doctors...you just mentioned it...wow...you are loosing it...embarrassing...

Well Joe she may be a doctor but not one who sees patients. More of a Beacon PR person.

States that have remained open are doing better than those that did extreme lockdowns. That's science too. Regardless, the risk vs. benefit of restricting individuals' activities has long ago tipped in favor of opening up.

I honestly had no idea how ignorant Frank Lucchese was concerning Covid until reading his comments in this article. Stunning.

Stunning to you but not most freedom loving people. Stay in your basement.

Of course the Republican commissioners don’t want to listen to science and health officials...where did we see that? Oh yeah, the orange buffoon saying it will be over by Easter....2020....trust science....truth health care workers

Bache is not a heath care worker, she is an administrator. The actual heath care workers will tell you a different story but will lose their jobs if they do. But Joe, you should stay in the basement with your masks on breathing in all that air through your dirty mask.

"Bache is not a heath care worker, she is an administrator"... Hey Sidearm, are you referring to Dr. Bache? Do you even read the articles or just comment on stuff that is clearly out of your realm of understanding. embarrassing...