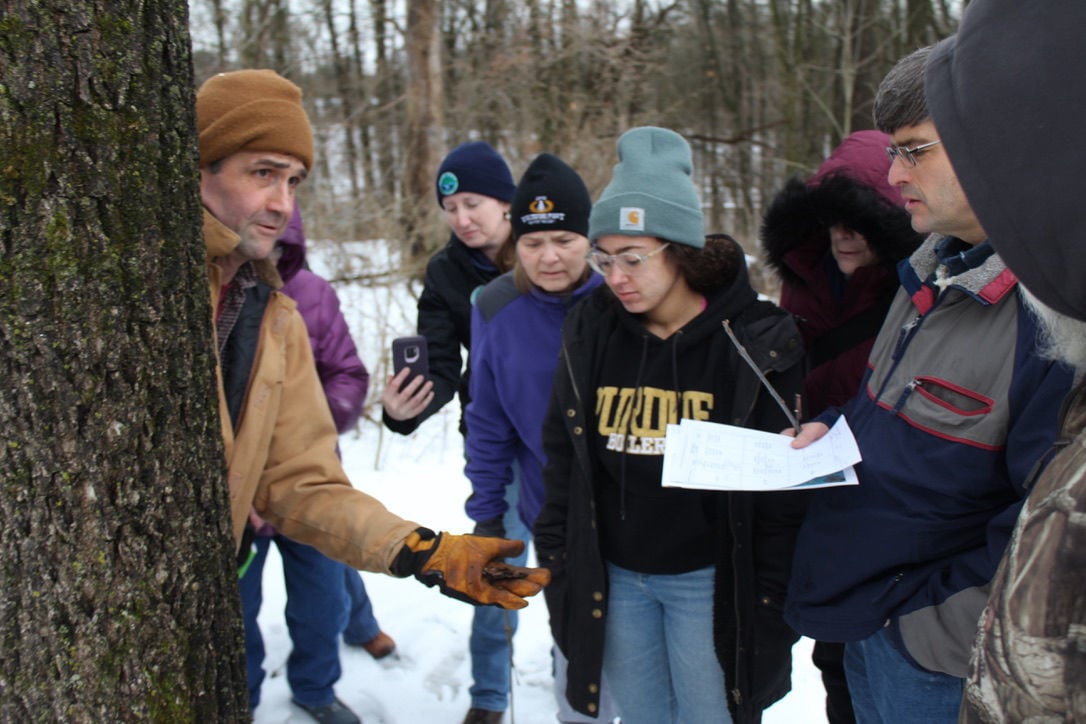 Goshen College professor Bill Minter hosted a workshop on identifying trees over the weekend at Bonneyville Mill County Park. Here, he shows how to use both the inside and outside of bark. 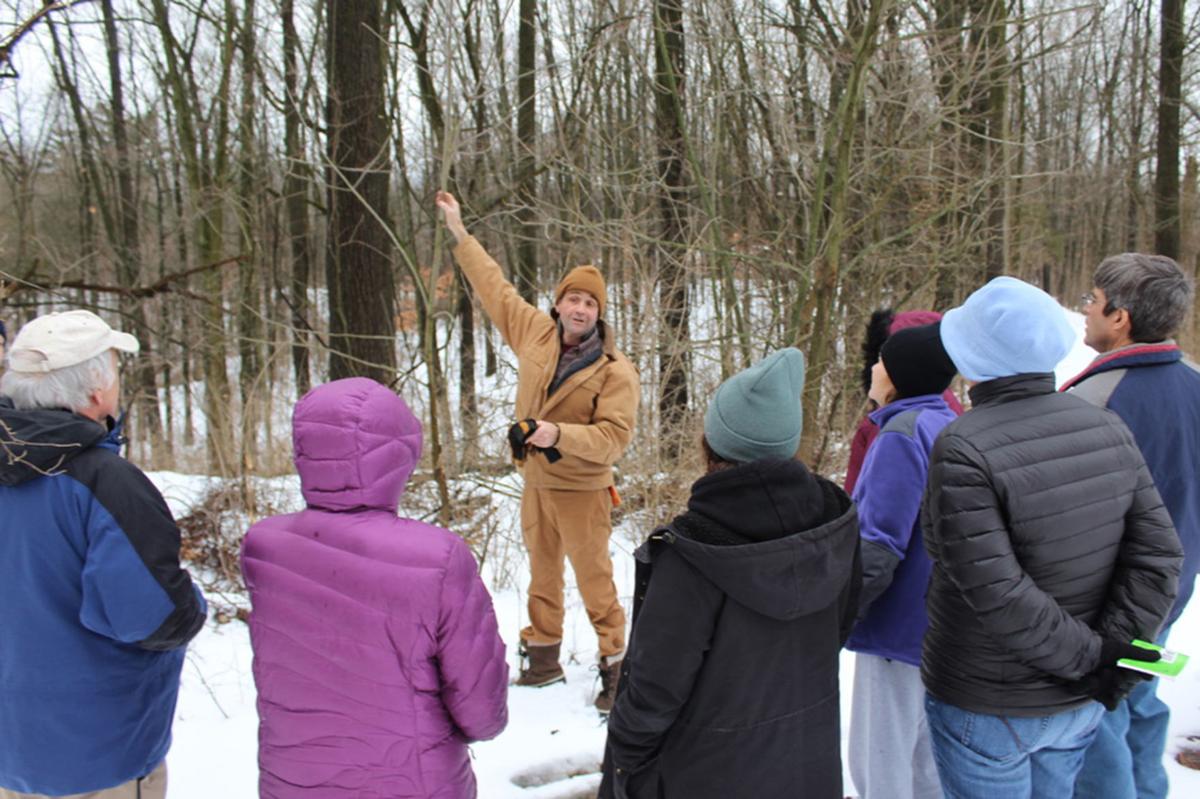 Part of the workshop showed how trees can be divided into groups of opposite and alternate growth, which may be easier to tell in winter than when trees have leaves. 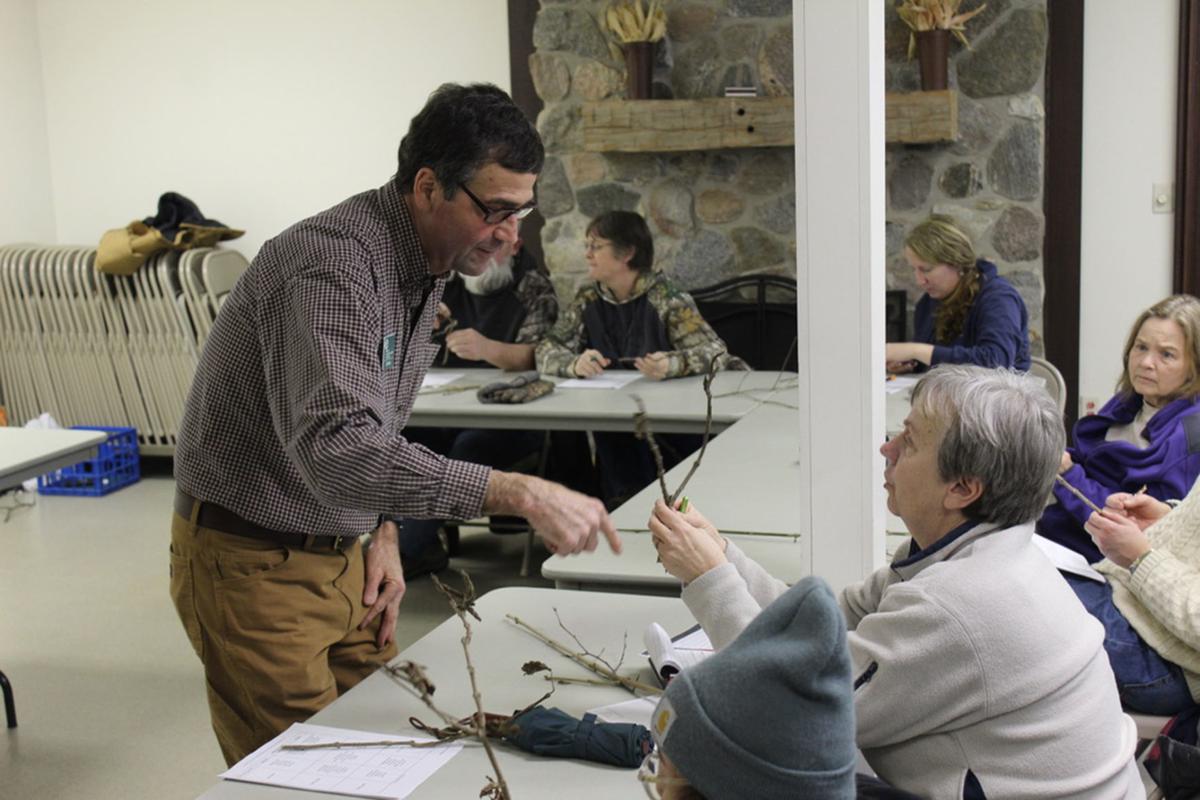 Goshen College professor Bill Minter hosted a workshop on identifying trees over the weekend at Bonneyville Mill County Park. Here, he shows how to use both the inside and outside of bark.

Part of the workshop showed how trees can be divided into groups of opposite and alternate growth, which may be easier to tell in winter than when trees have leaves.

BRISTOL — Naming trees in winter can be tricky. But be like Sherlock Homes and you might be successful. It is the art of deduction.

“It’s going to help us sort out what it isn’t from what it might be,” said Bill Minter, director of land management at the Merry Lea Environmental Learning Center of Goshen College.

He taught a winter tree ID workshop this weekend, hosted by the Elkhart County Parks in the Baldwin One-room Schoolhouse in Bonneyville Mill County Park. The workshop was sold out, as local fans of the outdoors were looking for a better understanding of their surroundings.

“This is just an interesting class to come and learn about winter trees, because sometimes – even in the summertime – you have difficulty identifying trees from the leaves,” said Tom Watson.

While it could seem like identifying trees in winter is a fool’s errand, since the leaves are gone and fallen fruits may be covered in snow, Minter believes that these months might be the best time for it.

“Actually, leaves can do more confusion in identifying a tree than some of the other characteristics I am going to talk about,” he said. “But when it’s all brown, where do we go from that?”

The first thing to look at is the soil conditions. Having a basic knowledge of what trees grow locally in dry, moist and wet conditions can help the naturalist narrow things down right away.

“This gives you kind of a reference to say ‘I need to make some decisions. This is not sandy and dry. It must be this kind,’” he said, giving participants a printout describing the conditions that native trees prefer.

Another clue comes from the shape of the tree crown. A crown that has a profile like a tall pyramid is probably a conifer. But, since those are evergreens, they certainly stand out in winter. So what if the tree has no leaves? Then it might be a tulip poplar or a blackgum – a native species that Minter said most people do not know, though perhaps they should.

“It’s my favorite tree for planting shade trees,” he said. “And that tends to have that form.”

Crowns that are rounder could belong to a whole range of deciduous trees and so does not say much on its own, unlike crowns that are somewhat vase-shaped, with branches arching out as they go up. Those are elms, Minter said.

After determining the crown’s shape, it is time to look at bark. But bark can be tricky, since it changes with the age of the tree. Color is helpful, as is determining whether the bark is rough or smooth.

Krista Daniels, a county parks naturalist, said that one very distinguishable bark belongs to the hackberry.

“Somewhere along the line I learned it looked like somebody hacked on it,” she said, making a vomiting sound that cause the class to break out in laughter. “You’ll remember it, won’t you?”

Scraping off the outer bark of a tree can also help reveal its identity. For example, northern red oak and black oak can be told apart by looking at the inner bark, where the red oak has a salmon color and the black oak is bright yellow.

But taking off a tree’s bark is something that should be done carefully and only at certain times.

“You don’t want to be wounding trees during the April through October time,” Minter said.

On the cold winter day, the fireplace in the schoolhouse warmed the group, and Minter had brought in different kinds of twitches to let his students learn how those can reveal a tree’s secrets. With the help of May Watt’s Tree Finder book, which fits in a pocket, twitch information like the shape of terminal buds, the color of the pith, and whether growth happens at alternate or opposite points of a branch will take naturalists through the tree finder until they find the right species.

And though Minter does not expect people to be able to take that information and make a determination without that kind of help, he said one acronym helps narrow down the types of trees that has branch growth that is opposite rather than alternate.

That acronym is mad horse.

“Opposite-branched species of deciduous trees are going to be maples, ashes, dogwoods or horse chestnut,” he said.

But the workshop really was not about remembering it all.

“What I’m showing you is how you can start very broadly and narrow things down,” Minter said.

To Pat Watson, getting this understanding is not just good for its own sake. Identifying serviceberry trees is something that she has a particular interest in.

“I’m interested in that because it attracts birds to help them survive throughout the entire season,” she said.

And Watson expects that the workshop will help her know what trees are native, which is something she cares about.

“I want them to keep going because that attracts the wildlife, the birds, the animals that we have in our area and give them the best chance,” she said.