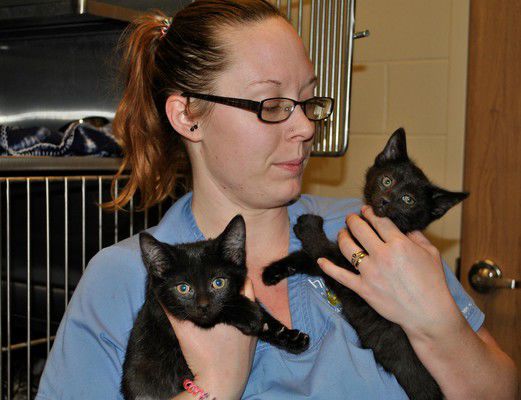 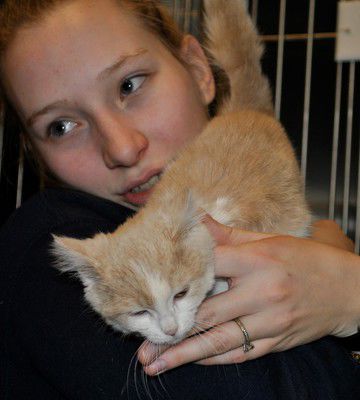 Iris, an 8-week-old kitten at the Humane Society of Elkhart County, is held by animal care attendant Sydney Justice.

Iris, an 8-week-old kitten at the Humane Society of Elkhart County, is held by animal care attendant Sydney Justice.

BRISTOL — The number of euthanizations at the Humane Society of Elkhart County has decreased drastically in the past decade, sparing the lives of thousands of cats and dogs, officials say.

“It’s kind of a situation where a lot of things have to come together for that to happen,” executive director Rob LaRoy said.

Moving into the new shelter in October 2017, the Humane Society was able to isolate sick or newly found animals from the general population to keep possible infectious disease from spreading. Temporary isolation is one of the major factors in the decrease in animal deaths at the shelter.

Since then, the Humane Society hired an on-site veterinarian, eliminating the need to pay high costs at outside clinics and allowing even more animals to survive their shelter stays.

“Almost every cat we get comes in sick or gets sick at some point,” LaRoy said. “With this many cats in one place, it’s like having a room full of kindergartners. Having the vet on staff has been a huge boost for us.”

According to a September 2019 report, the number has gradually increased over 10 years to allow for 85.4 percent of cats and 95.6 percent of dogs to leave the shelter by way of adoption or rescue fostering.

The numbers are in spite of the increase in animals entering the shelter each year.

“Our cat numbers are continuing to increase due to the amount of cats in the county which are not spayed and neutered, and it’s going to continue to grow until we find a way to control it,” Animal Control Officer Ben Mathews said. “Unfortunately our biggest animals are cats. One mother cat can have multiple litters in a year, and if we’re dealing with multiple litters a year, it really adds up.”

Last year over 1,300 animals were adopted from the shelter. LaRoy said it’s the most the shelter has ever seen.

That, in conjunction with a decrease in euthanizations, means shelter workers are regularly inundated with homeless furry friends, so they’ve begun another project to help stem overpopulation in the facility.

“We’ve really worked to try to shorten the length of stay,” he said.

While some animals stay at the shelter for just a few days, others are there upwards of six months.

One way the Humane Society is combating overpopulation is to make deals with various animal rescue groups, offering a few more easily adoptable pets if they agree to also take some of the less desirable ones.

The Humane Society also began working with more rescues overall in 2019, estimating that over 2,300 of the nearly 7,400 animals that entered the shelter last year went to rescues. Some were sent as far away as Wisconsin.

“The general overall feeling in the animal welfare community is that we’re going to care for all animals,” LaRoy said. “The history of animal control, not just in Elkhart County but everywhere, was kind of the pound mentality where we went out and rounded up stray animals and if no one claimed them then they were euthanized.”

LaRoy said that mentality changed long before 2010, but many facilities didn’t have the tools to change.

Nowadays, Animal Control’s Mathews responds to calls of lost or stray animals and brings them to the shelter not only to be collected by their owners but to be adopted by new families if need be.

Still, with an increase of 1,400 animals coming through the shelter doors in one year’s time, LaRoy said unpopular changes had to be made in an effort to keep the population as low as possible without euthanization.

“Another thing we did this year was (implement a policy where) if you have a dog or cat that you’d like to surrender, we’re making people schedule an appointment,” he said. “The appointment is usually a couple weeks out. We give them the tools to post their pet on Pet Finder or rehome their pet.”

It’s partly so the shelter can find homes for other animals in their already perpetually maxed out center, but officials also hope the waiting period will encourage pet owners to keep their pet or rehome them themselves, so the shelter doesn’t have to take on the burden. LaRoy said he’s found that many have decided to keep their pet, or found them a new home with a family member or friend.

Spay and Neuter your pet. Please. Adopt and support Trap, Neuter and Release programs! If you find a stray, there are groups that will offer to do these services for you. We need to fix the overpopulation problem. Great job to the shelter and all the rescue groups helping!