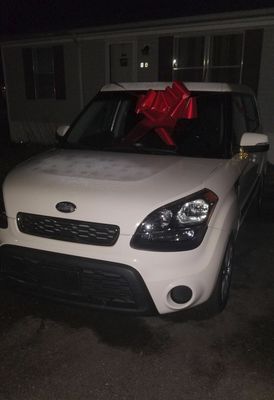 Wenger’s family was surprised to find this car in their driveway Christmas night. 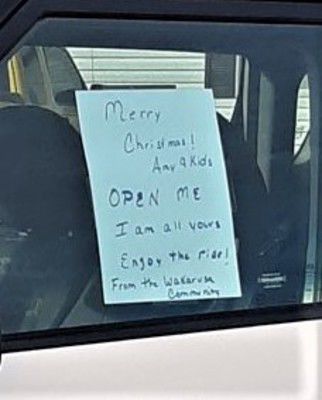 A note on the driver’s side window said the Wakarusa community was giving the vehicle to the family.

Wenger’s family was surprised to find this car in their driveway Christmas night.

A note on the driver’s side window said the Wakarusa community was giving the vehicle to the family.

WAKARUSA — A Wakarusa family received the Christmas gift of a lifetime this holiday season.

Amy Wenger, a 25-year resident of Wakarusa, was heading home from her mother’s house Christmas evening, three children in tow, and a boyfriend following in the car behind her.

“We pull around the corner, and we see this car sitting in the driveway,” Wenger said. “In my mind, I’m thinking (it’s the) neighbor’s overflow from their Christmas party.”

A bright red ribbon placed atop the car, however, confirmed that the 2013 white Kia Soul in her driveway was a Christmas gift from her friends and family in the Wakarusa community.

Wenger, a long-time advocate for the community, said she was at a loss for words.

“My words will fall so far short to summarily express the joy we felt when we realized that this was actually a gift from our Wakarusa beloveds,” she wrote in a post on Facebook shortly after receiving the gift.

As a member of the Maple Syrup Festival Committee, a volunteer at the Wakarusa Historical Museum, long-time reporter for the town, and being involved in various other activities that keep the town moving, Wenger was thrilled to see that residents took notice of her struggles and showed appreciation for the work she’s done in the community.

A letter stuck in the driver’s side window read, “Merry Christmas Amy & Kids! Open me. I am all yours. Enjoy the ride. From, the Wakarusa Community.”

The Wenger family had a rough couple of years. She was diagnosed with chronic kidney disease five years ago, shortly after the death of her father. After that, she and her husband separated and the bills have been tight. Wenger’s rusty red 1999 Saturn, which spent regular time in the shop and could be heard heading to the city square from two blocks away, just wasn’t cutting it anymore, but funds have made it difficult to purchase an all-new vehicle.

“I wish you could have seen the faces of my children, and see the tears glistening in their eyes when we came home on Christmas Day to find a beautiful new-to-us car parked in our driveway,” she said in a letter to the Wakarusa Town Council on Tuesday night.

“I could spend the rest of my days authoring eloquent passages of thankfulness, and still, there would not be time enough,” she wrote.

She still needs to get the vehicle plated and insured, but Wenger hopes the new car will allow her to pass her old Saturn on to her daughter, a college student in Bloomington.