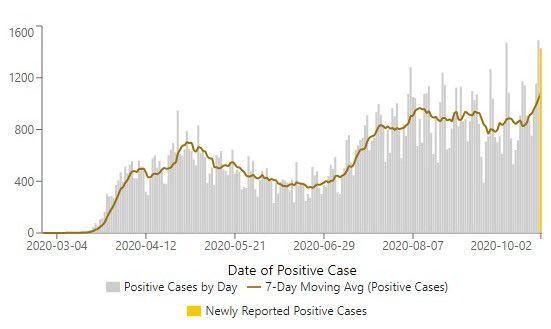 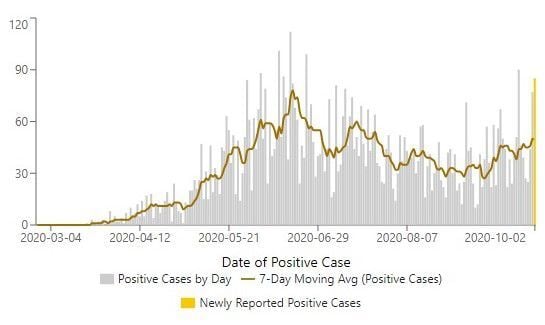 In Elkhart County, 85 new cases pushed the seven-day average number of cases reported daily to 49, a level not seen since July 25. No new deaths were reported, leaving the total in the county at 114.

Newly recorded deaths in Indiana lifted the state’s death toll to 3,669, including confirmed and presumed coronavirus cases, according to the Indiana State Department of Health. That is an increase of 92 deaths in the past week.

The agency reported about 1,400 new COVID-19 infections, pushing the seven-day average to 1,080 through Friday. That rolling average has grown about 30% since Sept. 24 and stands at the highest level since the outbreak began in mid-March.

Those increases come even as health experts say it could be weeks before the state sees any possible impact from Republican Gov. Eric Holcomb’s decision to lift most of Indiana’s restrictions on businesses and crowd sizes as of Sept. 26 while continuing the statewide mask mandate.

Holcomb this past week defended his decision as balancing lives and economic livelihoods.

“It means we need to hunker down in the areas where we see spread and that’s what we are doing,” Holcomb said.

State statistics show that Indiana hospitals were treating 911 COVID-19 patients on Friday — the eighth straight day that hospitalizations have topped 900. The last time the state saw such a long streak was in early August.

“Hoosiers aren’t getting leadership from Gov. Holcomb, they’re getting someone afraid of governing in the midst of a pandemic,” Myers said.

We should get it over like Sweden. No masks , then daily deaths will hit zero soon like them

Sweden has one of the highest death rates compared to other Scandinavian countries. That would mean millions of Americans would need to die. If everyone just wore mask and practiced social distancing for 6 weeks this would be greatly reduced. Trump lied and failed this country and over 210,000 Americans have died. He needs to be fired.

I don’t think you understand, the Dems don’t want it over. They want to use it as a control issue over the public. Joe knows this so he pushes the diatribe daily. I thought for a while he was just a useful idiot for the party but his constant fear mongering shows he is a little more involved than that. Elect this bunch of socialists and watch what is left of your freedoms disappear with government regulating what you wear, how you speak and on and on.

Increased cases is not a surprise. From Trump, the Governor, the County Commissioners in Elkhart County, the sheriff, and some degree the County Health Department have all contributed to this. Instead of listening to and following CDC guidelines they play politics with our lives. The anti maskers and anti vaxers are pushing the narrative and local government is cow-towing to them. We may see numbers again which will ultimately effect the economy and the schools once again. Politics should have played no part in stopping this pandemic and yet here we are seven months later and cases are still rising.

When Trump said it would be gone by Easter, I guess we should have asked what year? DIdn't magically disappear like he said it would and he never took it seriously from the start. Trump lied and over 210,000 Americans have died....