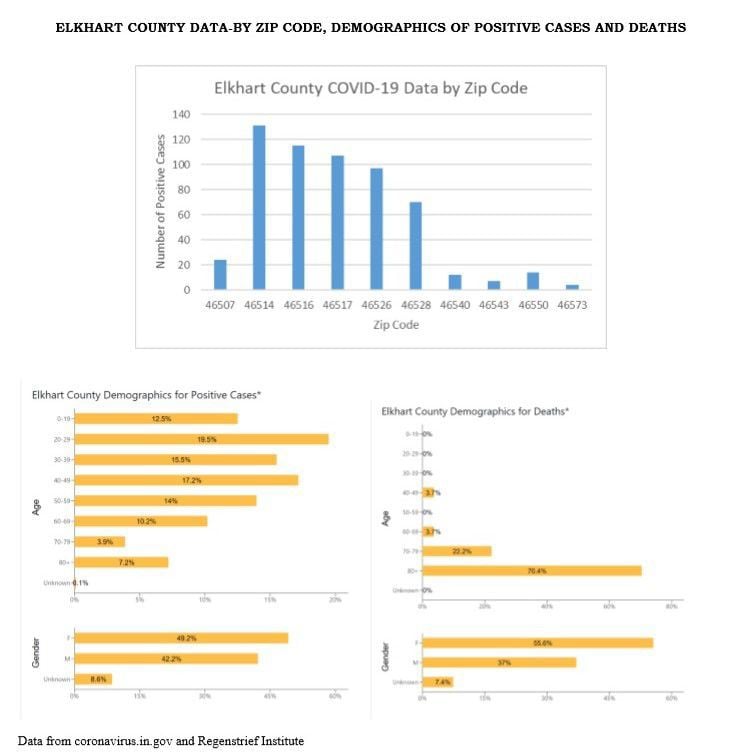 These charts released by the Elkhart County Health Department on Friday show a breakdown of local demographics related to the coronavirus outbreak. 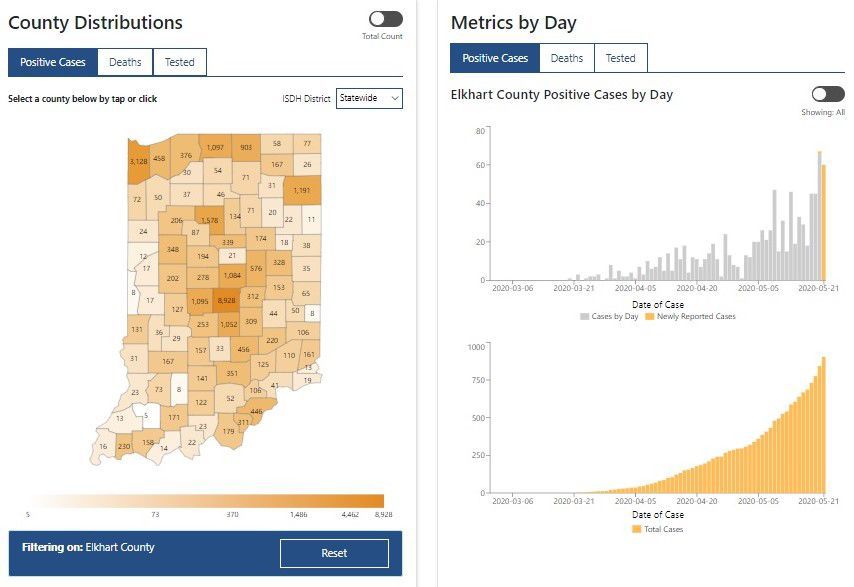 Sixty-one new cases of COVID-19 have been confirmed in Elkhart County.

These charts released by the Elkhart County Health Department on Friday show a breakdown of local demographics related to the coronavirus outbreak.

Sixty-one new cases of COVID-19 have been confirmed in Elkhart County.

One of those new cases was confirmed Wednesday, bringing that day’s total to 67, the highest daily number yet. The other 60 new cases were confirmed Thursday, according to the Indiana State Department of Health.

That brings to 903 the total number of confirmed cases in the county since the outbreak began in March.

No new deaths were reported in the county, leaving that toll at 27.

The number of new tests reported was 444, most of them from specimens collected on Monday and Tuesday but some dating as far back as March 25. About 12.9 percent of the 7,004 tests completed have come back positive.

Elkhart County Health Department spokesperson Melanie Sizemore said the release of the chart was to provide more information to the public, although it largely confirms a generally accepted notion that Elkhart and Goshen are the hotspots in the county, “but they are also more populated, and in general, that’s what’s going to happen.”

The continuing rise in the number of cases in Elkhart County was due only in part to greater capacity for testing, she said. Eighteen testing sites in the county are available to the public, she said.

“Regardless of that, we’re also finding more positives, which tells the health department there is more community spread,” Sizemore said. “We’re seeing more positives, in part, because people are going back to work, they’re out and about enjoying the weather, and they’re doing the things people do as everyone gets used to the new normal.”

She urged residents to continue taking precautions such as wearing masks, washing hands and following guidelines for social distancing.

Across the state, 493 additional Hoosiers have been diagnosed with COVID-19 through testing at ISDH, the Centers for Disease Control and Prevention (CDC) and private laboratories. That brings to 30,409 the total number of Indiana residents known to have the novel coronavirus following corrections to the previous day’s total.

Intensive care unit and ventilator capacity remain steady, according to the state. Nearly 38 percent of ICU beds and more than 81 percent of ventilators were available as of Friday.

A total of 1,791 Hoosiers are confirmed to have died from COVID-19, an increase of 27 over the previous day. Another 150 probable deaths have been reported based on clinical diagnoses in patients for whom no positive test is on record. Deaths are reported based on when data are received by ISDH and occurred over multiple days.

A complete list of cases by county is posted at www.coronavirus.in.gov, which is updated daily at noon.

The Indiana State Department of Health on Sunday reported 53 new confirmed cases of COVID-19 in Elkhart County from Saturday.

No additional deaths have been reported in the county since May 19, leaving the toll at 27.

Additional reporting raised the total number of cases in the county to 991, the state report said Sunday.