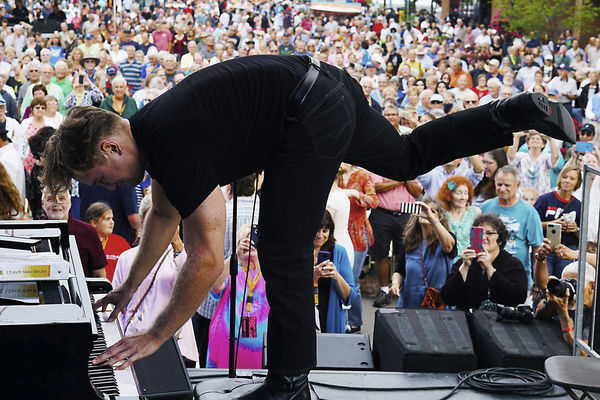 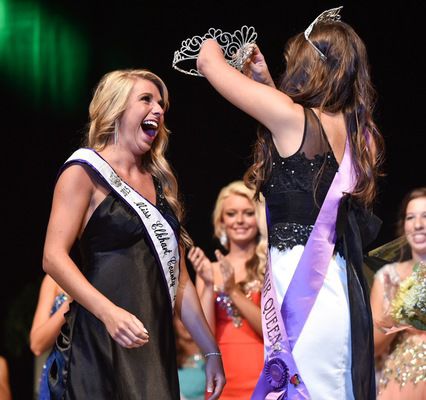 Elkhart Truth file photoJessica Gorden, left, is crowned as the 2015 Elkhart County Fair Queen by 2014 Queen Sarah Stump in 2015. The fair, the largest in the state, is among the most popular events in the county each summer.

Elkhart Truth file photoJessica Gorden, left, is crowned as the 2015 Elkhart County Fair Queen by 2014 Queen Sarah Stump in 2015. The fair, the largest in the state, is among the most popular events in the county each summer.

Tourism in recent years has had a growing economic impact in Elkhart County, according to the latest report released by the Elkhart County Convention and Visitors Bureau, a trend officials believe will continue.

Commissioned by the bureau and conducted by Certec Inc., the biennial economic impact report found that tourism contributed $550 million to the county’s economy in 2017. That was an increase over the industry’s $488.4 million contribution in 2015.

Of that total, direct expenditures accounted for $374 million. This includes everything from hotel rooms, lodging and spending at restaurants to shopping and attending festivals and events. Economic impact grew at an estimated 3% rate, adjusted for inflation.

It’s also the bureau’s estimate that tourism and hospitality contributed to 6,200 jobs in Elkhart County in 2017 compared to 5,800 in 2015. Direct expenditures created 4,716 of these jobs, the study shows.

“The difference between total economic impact and direct visitors spending is the money that businesses in Elkhart County then take and reinvest into their own businesses whether it’s making improvements to their properties or purchasing services for their businesses,” said Terry Mark, bureau’s communications director. “So, there’s a multiplier effect there from the amount of money that visitors spend in Elkhart County.”

The variety of attractions in the county and having the Indiana Toll Road run through the county are key to bringing in tourists, according to the bureau.

“Tourism and hospitality are not dependent on one segment,” Mark said. “Our destination’s events and festivals are also important contributors to Elkhart County’s tourism industry.”

In Elkhart, one of the biggest events during the summer is the Elkhart Jazz Festival.

In its 32 years of existence, the festival historically draws anywhere from 15,000 to 20,000 people to the city’s downtown area over a three-day period, many from out of town, festival organizers said.

For Elkhart, the festival is also a chance to put the city in a positive light and to highlight the city’s role in the music industry, organizers said.

“The Jazz Festival is a showcase for Elkhart because it brings many thousands of people to downtown and with the improvements that have been happening to downtown, it’s a great showcase,” Mark said. “It’s also a celebration of our heritage as musical instrument makers. It’s a win economically, and it’s a highly reputable event, which is a great thing.”

Kurt Janowsky, co-chairman for the festival, said the event is not only a great quality-of-place ingredient for Elkhart County, but it’s also a big draw for people from outside the area.

Last June, the festival had visitors from 40 states and four countries, he said.

“Those tourists spend a couple of hours a day at restaurants, hotels and gas stations and the shops in downtown Elkhart all love the festival and feel it’s a great thing,” he said. “A lot of the merchants’ downtown do a sidewalk sale during the festival, which also helps draw people in.”

In the eight years he’s been involved with the festival, Janowsky said it gets bigger and better.

“Attendance figured are more estimates based on ticket buyers and festival passes purchased, but also what we see with our eyes on the Civic Plaza during the weekend where there are many passers-by,” he said.

Asked what he believes contributes to the overall success of the festival, Janowsky said continuity.

“The festival has been going on for 32 years and we’ve never taken a year off,” he said. “Also, we bring in a lot of good talent and draw at least 100 musicians each year. Whether you’re a jazz fan or just a music fan or just someone that likes activity, the festival is great.”

For its part, the Lerner Theatre has seen significant growth in visitors over the years, officials said.

“The way we were able to do that was through our programming,” Frank said. “People buy tickets for things they want to see. So it was really important to me when I came on board that we bring in national shows”

For years, Frank said, the theater was a fill-date destination, which means a stop that musicians would make between their national tour dates.

That changed in 2017 when Frank booked the theater’s first national tour with pop band 98 Degrees.

“So anytime you saw a stop with 98 Degrees’ national tour in 2017, we were a stop along the way,” she said. “And we’ve been continuing to maintain that where we’re bringing in national tours throughout a year, which is why we now have 46 states and two countries represented in our ticket buyers.”

Frank said Elkhart is always the theater’s biggest ZIP code, followed by cities in St. Joseph County and other neighboring communities. If it’s a national tour show, many will come from 60 to 90 miles away.

“I would say national tours, the Elkhart Jazz Festival and shows by the Premier Arts are our top three draws,” she said.

Although the Lerner represents the entertainment portion of tourism, Frank said when it thrives, it also contributes to the success of other local businesses.

“When the Lerner is busy, our local restaurants, bars, breweries are packed,” she said. “So when the Lerner is successful, it bleeds into the rest of the community. Visitors visit the Lerner for their entertainment then make stops elsewhere, so it’s a cultivation of an entire community just based around the Lerner.”

The Elkhart County 4-H Fair is conducted annually in Goshen and has become the largest county fair in Indiana and one of the largest in the country.

On average, the fair draws over 200,000 people throughout its nine-day course, fair organizers said. Some of the main attractions at the fair include the animals, rides, food, commercial booths, contests and grandstand shows.

Trent Hostetler, fair board president for 2020, said he believes the county fair is a great way to draw visitors to Elkhart County and attract and keep residents.

“I think the people see it as a great way to get the community together,” Hostetler said. “They see the need to support our youth and 4-H program and the other thing is with our food vendors. We have a lot of civic clubs that use that money to give back into the community so people like to support them. Our 4-H clubs have booths to raise money to support their club. So it’s a great excuse to eat some delicious food that may not be healthy while also supporting a good cause.”

Although the Elkhart County 4-H Fair is the largest event at the fairgrounds, it isn’t the only one.

“Our fairgrounds are kept up well,” Hostetler said. “We’re always trying to improve our facilities. It’s centrally located in Elkhart County and it’s a lot of people that love camping on our fairgrounds because it’s cost-effective compared to other campsites. It’s just outside of town where it’s quiet, but yet you’re only a few miles away from other restaurants, shopping, and other activities, so it’s a good location.”

The tourism and travel economic impact report for Elkhart County for 2019 will be released in 2020, Mark said, adding that the CVB believes 2019 has been a good year.

“For the last three years, we’ve really invested our time and energy in promoting the exit 92 campaign to people who travel to stay overnight or if they want to eat out what we found is that has been very successful for transient travelers,” he said. “They’re not going to necessarily be sightseers, but we think there’s a lot of people who drive cross country that are needing a place that’s convenient that they can stay overnight.”